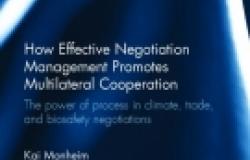 In this carefully researched and detailed book, Kai Monheim argues persuasively that process matters in global negotiations, and much more so than analysts have generally cared to acknowledge. In a context of consensus decision-making rules and narrowly-overlapping interests, whether a multilateral negotiation is managed well, or poorly, can make the difference between success and failure. Few would dispute this: any human endeavour – birthday party, round-the-world trip, business meeting, building project – is much more likely to succeed if is it carefully and wisely organised. Multilateral negotiations are no exception, and indeed given their inherent complexity and the politics involved, they are particularly vulnerable to incompetent management.

Monheim demonstrates what he calls the “stellar” importance of process by invoking three “pairs” of negotiations, where initial failure was followed by success a few months later: the climate conferences of COP 15 Copenhagen (2009) and COP 16 Cancun (2010); the biosafety conferences of Cartagena (1999) and Montreal (2000); and the WTO trade negotiations of Seattle (1999) and Doha (2001). These are indeed “classic” cases, well-known to students of international negotiations, where process is often invoked as an explanatory factor. The accounts of the climate “pair”, which constitute the bulk of the book, are fascinatingly rich. Although this was not the object of his research, Monheim may well have written the definitive account of both the Copenhagen and Cancun conferences, and for this alone, the book is worth reading.

The book includes many insights that will resonate with those readers who follow international negotiations closely. It reveals, for example, the importance of perception and reputation. It is not enough for the organizers of a negotiation (usually, the Chair or President and his/her team) to be inclusive and transparent – they must be perceived as such. Many of the techniques used by the Mexican Presidency in Cancun, and the Danish Presidency in Copenhagen, were similar, yet they were received very differently by the climate change delegates at these conferences. While the Danes could do no right, and all their procedural efforts were interpreted negatively, the Mexicans could do no wrong, and their inevitable mistakes were forgiven. In this sense, the importance of the personal and cultural fit of the meeting Chair/President – and to a lesser extent the secretariat leadership - is probably even greater than the book makes out. The Mexicans were able to manage the process well, because they were trusted and respected, and enjoyed the goodwill of parties. The Danes couldn’t, because they didn’t.

Why? Monheim’s account suggests that sheer personality, charisma and diplomatic skill appear to make a huge difference. And here, the book stops tantalisingly short of asking a fascinating question – why is it that the organizers of all the successful cases studied originated from Latin America and the Caribbean (or elsewhere in the developing world) (Mexico, Colombia, Costa Rica, Qatar), and all the unsuccessful ones from the developed world, principally the EU (Denmark, Netherlands, the US)? And this pattern is replicated, certainly in the history of the climate change negotiations, with Argentina’s Raul Estrada and his legendary chairing of the Kyoto Protocol negotiations, as compared with the Netherlands’ Jan Pronk’s unhappy watch over the first climate negotiation failure at COP 6 in The Hague in 2000 (although this negotiation was rescued, in 2001, at COP 6 part II in Bonn). The procedural success of the 2014 Lima climate conference, with the Peruvian Presidency widely congratulated on its inclusivity and transparency, continues this theme. Monheim, however, shows a remarkable lack of curiosity in simply noting that Juan Mayr, the much-lauded Colombian Chair of the rescued biosafety negotiations “interestingly shares a Latin American cultural background” (p.250) with the fêted Mexican climate change Presidency. International relations theory tends not to be comfortable dealing with culture, and (perhaps linked) personality traits, but there are profoundly political forces at work too. A deep sense of distrust and, often, misunderstanding still pervades interactions between developing country delegates and their counterparts from the political north. Developing countries, who are in the vast majority and much more sensitive about [being] [feeling] excluded, are far more likely to accept the authority of one of their own, while viewing the leadership efforts of Northern chairs with suspicion.

Inevitably, I take issue with some of the book’s analysis. The choice of the term “arguing” to denote a positive mode of negotiation, and “bargaining” to denote a negative one, seems rather odd. “Arguing” suggests futile bickering and point-scoring (common features, of course, in the international arena), which typically lead to stalemate in negotiations, whereas bargaining – trading positions, crafting compromises, offering concessions – would seem to be the essence of successful talks. Another quibble concerns the importance of the “springboard effect” – a negotiation failure preparing the ground for success next time round. In my experience, this is much more important than the book makes out, as borne out not only by the examples chosen, but also the above-mentioned “pair” of The Hague/Bonn in 2000/2001. To return to the book’s main example, the principal achievement of the COP 16 Cancun conference was to ratify the COP 15 Copenhagen outcome; it was the Copenhagen conference, for all its messiness and undoubted dreadful process, which secured the political breakthrough. There are many other reasons why the Cancun conference succeeded whereas Copenhagen failed: fewer delegates and NGOs were present, reducing the logistical complexity; the paucity of heads of state lightened the political intensity of the meeting; while much lower expectations made for more sober-headed talks. The really interesting question is whether the Mexican Presidency could have organized a successful COP 15, or whether those negotiations would still have collapsed. And the irony is, this nearly happened: the Danish Presidency “swapped” Europe’s slot for hosting the climate negotiations with that of Mexico for the Latin American and Caribbean group. And so, in another universe, Mexico “should” have hosted COP 15, and Denmark COP 16. How different would the outcomes have been?

No one would dispute that a better organized negotiation is more likely to succeed and, if the political odds are stacked against it, a badly run meeting can tip a round of talks into failure. The problem is, that very little can be done to ensure that a skilful, charismatic and respected senior delegate, with the support of a competent, united and politically astute team, gets the top organizing job. The position of negotiating Chair is not subject to an objective selection process, rather, regime Presidencies tend to rotate among the five UN regional groups, and any country can “bid” to host a conference. Fortunately, there is some evidence that successive presidencies do learn from the mistakes of others – Copenhagen was a sufficient shock, for each climate presidency since then to pay enormous attention to transparency and inclusivity. However, there is nothing to guard against the rise of future Chairs/Presidents who are as unprepared to guide and manage unruly negotiators, as the ill-fated President of COP 15 in Copenhagen, Lars Rasmussen.

Luckily, this book puts forward a wealth of very practical policy proposals for organizers – even the most inexperienced – to help manage negotiations more effectively: pay attention not just to the large countries, but also the “non-mainstream” ones; make sure all delegates feel “respected”; avoid infighting in the organizing team; brush up on UN procedural rules, to name but a few. Perhaps Monheim should ensure that Laurent Fabius, President-elect of the forthcoming landmark climate change conference COP 21 in Paris, is sent a copy of his book – the future of the planet may depend on it.

Dr Joanna Depledge is an Affiliated Lecturer in the Department of Politics and International Studies at the University of Cambridge. Her main research interest lies in international climate change politics and global negotiations.