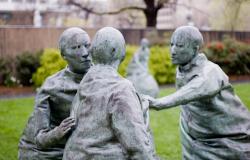 In an attempt to stay diplomatic and politically correct, leaders and organizations at WUF9 continue to brush dire issues under the carpet. Is the WUF9 just another forum for dialogues with no outcome, or will it make any difference this time?

The Ninth World Urban Forum (WUF9) hosted at Kuala Lumpur - meant to discuss the implementation of the New Urban Agenda (NUA) formulated at UN-Habitat III - opened with passionate and ambitious goals on improving people’s lives. Aiming for outcomes to create sustainable, inclusive cities, WUF9 speakers from around the world seemed enthusiastic to talk about pressing issues regarding socio-political and economic injustices. However, three days in, and there is no real talk on critical issues that need urgent attention. Rather, it appears that the speakers are deliberately keeping away from delving on these to avoid debates, brushing over with generic buzzwords.

The recently appointed Executive Director of UN Habitat, Maimunah Mohd Sharif offered little substance when asked about specific questions on measuring the progress of New Urban Agenda, claiming that both quantitative and qualitative would be used without given any details. As the first Asian-Muslim woman to be appointed as the Executive Director of UN-Habitat, and a champion of gender inclusive initiatives, she also had little to say about the safety of girls in Muslim countries, or the case of religious intolerance around the world. At the press conference, questions about how to tackle problems such as ethno-spatial segregation were waved off on the account that she has been appointed just three weeks before the WUF9, and needs time to think things through. While the appointment may be recent, issues of marginalization are decades old, and taking it lightly on an action-based platform leads further away from any resolution.

The lack of political will for solving context-specific issues neglects the phenomenality of crisis facing the world, further marginalizing the most vulnerable. For example, the current water crisis in Cape Town, which is counting to Day Zero as taps run dry in the city, was just mentioned in passing as a cautionary tale in the sessions regarding water management. For a forum that prides itself in attracting over 25,000 people from around the world to strategize on how to achieve sustainable cities by 2030, keeping away from specificity will only reduce the power of the UN  to actualize its goals.

At WUF9, different stakeholders continue to advertise their interests, often without any relation to how they would address the conflicts within those. At the Business Assembly gathered on day 1, emphasis was given to building infrastructures for the smooth functioning of the private sector business, completely ignoring that one of the speakers was Jane Anyango, who called out for recognition of the importance of business in informal settlements. The stark difference between these two narratives was not addressed on the very platform that was touted to produce practical, strategic solutions for transformations, as hoped by the Malaysian Minister of Urban Wellbeing, Housing, and Local Government, Tan Sri Noh Omar at the Opening Plenary Session of WUF9.

These contradictions seem to be a constant throughout the first three days at WUF9. The discussion on land and sustaining land market value was being discussed with regards to securing land tenure for informal settlements of the Global South. However, any concrete talk on how these extremely contradictory motives could be met at the same time was completely absent at the session. The effects of mega-urbanization led by China’s geopolitical project One Belt One Road project was celebrated, window dressing the environmental damages the economic-corridor projects are causing, especially in Pakistan.

The consistent efforts to stay diplomatic on politically controversial, but significant issues indicated the desire to play it safe by the leaders of UN-Habitat. The disconnect between stakeholders because of conflicting interests, and the failure to bring them together to formulate global policy takes away from the very purpose of the WUF9 gathering. Instead, it reduces it to just another event glorifying UN’s intentions and its multiple (and coming) events, derailing critical issues to be discussed in the next gathering. The continuous advertisement of the High Level Political Forum to be held in July 2018, and WUF10 to be hosted by Abu Dhabi in 2020, make it seem like 2030 would be here and none of the issues will ever be solved.

Sadia Amin (@sadiaaming) is a student from the MA Cities and Global Development programme at the University of Sheffield.