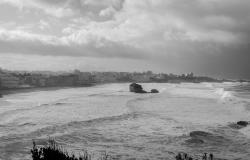 The next Group of Seven meeting is around the corner and the French President Emmanuel Macron is shining a spotlight on economic polarization. But will the world’s leading politicians be able to tackle one of the most pressing issues of our time?

When international leaders converge in the southwestern French seaside town of Biarritz from 24-26 August, they already know what topics are on the agenda. When France assumed the rotating G7 presidency at the start of the year, President Emmanuel Macron was quick to earmark combating inequality as a top priority.

In the run up to the closely watched summit, French politicians have outlined a range of targets, saying they aim to step up the international fight on tax havens and challenge tax optimisation, referring to how companies employ legal and organisational tactics to secure the lowest possible level of taxation.

Already last year President Macron raised the issue of polarization at the United Nations General Assembly, sounding a warning about “those left behind by globalization.”

And, it is perhaps unsurprising that the issue is close to Macron’s heart. At home, the French leader has been dealt a loud reminder about the gaping gap between rich and poor during extended, and sometimes violent, protests by the yellow vest movement, which kicked off last November after fuel tax rises, rattling his popularity and sparking copycat movements elsewhere.

And the need for a proactive global approach to inequality is clear. G7 nations, Canada, France, Germany, Italy, Japan, the United Kingdom, and the United States have a mixed track record on dealing with the growing cleft between rich and poor internationally. That can be seen in the Bertelsmann Stiftung’s Sustainable Governance Indicators (SGI) project, which ranks countries on their commitment to promoting equal socioeconomic opportunities in developing countries.

Its 2018 indicator, for example, shows how Germany and the United Kingdom are frontrunners among G7 nations, scoring 8 out of a possible ten points, signaling a government that “actively engages in international efforts to promote equal socioeconomic opportunities”. Italy meanwhile, is among a list of nations scoring just five points, reflecting “limited engagement in international efforts” while “many of its measures or policies lack coherence”.

Gender inequality under the spotlight

The French G7 hosts have also set their sights on disparities between women and men, which has been dubbed a “major cause” of Macron’s term in office. But it is clear that the G7 participants differ starkly when it comes to the litmus test of the equality within a nation: the representation of women within national politics.

In the SGI 2018 survey on the percentage of seats held by women in respective national parliaments, France tops the list of G7 nations, scoring eight points, with women filling 39 percent of the seats in parliament. Japan, on the other hand, comes in last with a mere two points out of ten, reflecting its poor track record on incorporating women into power structures (with women making up 9.3 percent of the politicians in parliament).

Given that the G7 is a forum for discussion of global issues, rather than national affairs, the planned focus on gender can, at the most, serve to boost awareness of inequality in national parliaments. Likely aware of the limitations of its clout, the French presidency of the G7 has chosen more specific goals. Among its stated pledges on gender, it seeks to work towards combating sexist and sexual violence, guaranteeing women’s access to education and women’s economic empowerment, including in Africa, as well as promoting feminist foreign policy.

The limits of multilateralism

However, despite Macron’s lofty ambitions, an uphill struggle awaits him. After all, finding common ground will be hampered by frosty international relations within the G7, which comprises the unilateralism of U.S. President Donald Trump and Italian President Matteo Salvini as well as the United Kingdom which is in the throes of a protracted and politically divisive Brexit process.

And, once again, international observers will home in on damaging rifts between the G7 and Trump, who in June declined to confirm whether he would even attend the gathering. Earlier this year, a G7 foreign ministers meeting in Brittany was overshadowed by U.S. Secretary of State Mike Pompeo's decision not to attend.

Meanwhile, among politicians and pundits alike, memories linger of how Trump upended last year’s G7 summit in Canada by agreeing to a statement on trade and, shortly afterwards, withdrawing from it. That last-minute reversal is in keeping with the U.S. leader’s repeated clashes with other G7 countries on key issues ranging from trade to women’s rights to climate change, undermining a number of multilateral principles and cooperations which have sustained the world order in following the end of World War II.

And there are early signs that Macron is eying up damage limitation ahead of the meeting. To avoid losing face, a Buzzfeed report suggested that the French president was planning to avoid drawing up formal conclusions at the summit, if disagreements between the leaders are too great. If the French hosts followed up on such a plan it would break with a decades-long tradition of sealing fixed agreements at the annual meetings.

Against this backdrop, France’s push for equality may be urgent and important, but its successes will be held in check by the divisions and mutual mistrust which currently beset the G7 grouping.

Jess Smee is a Berlin-based journalist and editor of SGI News and the Bertelsmann Stiftung's BTI blog.