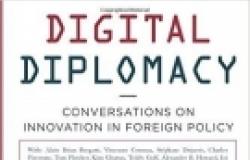 Digital Diplomacy explores what it means to be innovative in foreign policy and diplomacy. Digital and social media technologies are having an impact on everyday life and also on diplomatic practice, notably on the ways governments engage foreign publics. While the fundamentals of diplomacy may remain the same, and the traditional tools are by no means discarded, diplomacy in today’s world is more public, participative and global due to the emergence of new communication platforms. Governments can reach wider, even global audiences, and non-state actors and even individuals are empowered by instant communications, in a process that creates both opportunities and challenges.

Tom Fletcher, the British Ambassador to Beirut, underlines the importance of these trends when he states in the Preface to this volume that “in the ten years since 9/11, that world has been transformed more by American geeks in dorms than by Al Qaeda operatives in caves” (p. xi). The result is the creation of a new context for diplomacy in which “it matters less what a minister or official says is our policy on an issue than what users of Twitter, Facebook, Google, etc., decide it is.”

Andreas Sandre, a press and public affairs officer at the Embassy of Italy to the US, and also author of Twitter for Diplomats (2013), has managed to gather in this book an outstanding sample of practitioners, scholars and of course diplomats to explore diplomacy and its interaction with the digital hyper-connected world, and how they understand innovation at the interface of diplomacy and technology. This is done through conversations with State Department officials, ambassadors, public relations executives, public policy experts, and academics. These leading experts explain what the new dynamics, developments and trends are, as well as theories in diplomacy brought about by the digital revolution in which non-state actors play an active role. Such access now provides diplomats the means to influence the countries they work in on a massive scale, not just through elite conversations.

Sandre aims to analyse the evolution of digital diplomacy, and he does so through the concept of Diplomacy 2.0: a two-way phenomenon in which ambassadors and foreign affairs officials tweet and blog while every citizen can take part in the process by talking about foreign affairs and even influence and help shape this area. The volume, however, focuses more on what Sandre calls Diplomacy 3.0. This is the creation of a new foreign policy space where both governments and civil society operate in a realm characterized by connections, partnerships, and collaboration, rather than hierarchies. “Diplomacy 3.0 is about the evolution of foreign policy into a networked environment where state and non-state are horizontally interacting with each other…. It is a space where power is dispersed and dependent on how connected you are” (p. xxviii).

The book is structured in three main blocks. The first, “Traditional vs. Innovative”, compiles thirteen interviews about the challenges and opportunities brought about by digital tools to foreign affairs and diplomacy, and the extent to which these tools add something fundamentally new to this old element of statecraft. This is a heterogeneous section in which very different approaches coexist. Alec Ross (former Senior Advisor for Innovation to the US Secretary of State) points to the need to understand the new context for diplomacy and foreign policy, reiterating his frequent assertion that the twenty-first century is a terrible time to be a control freak. As new tools increase the ability of governments to reach people, they also allow the other part to listen to a wider range of relevant actors: “Our statecraft has to have more street craft” (p. 13). With a much more sceptical point of view, Carne Ross of the Independent Diplomat contends that the fundamental nature of diplomacy and foreign affairs has not changed and remains fundamentally non-transparent and non-inclusive of citizens: something particularly true for people affected by decision making.

This same section presents a broad range of actors and strategies of outreach through social media, including the perspectives of Kim Ghattas (State Department BBC Correspondent), Teddy Goff (digital director of the Obama 2012 campaign), Arturo Sarukhan (Mexican Ambassador to the US, and the first in using Twitter in the DC diplomatic camp), and Matthias Lüfkens of Burson-Marsteller. Representatives of the UN explain how and why this global organization has embraced social media to complement and expand traditional communication strategies, and how new practices and lessons emerge at the junctures of the global and the local.

The second section, “The true nature of innovation”, explores the boundaries of this concept. Lara Stein (TEDx and TED Prize) explains how TED is now a global community of nine thousand events in 1,200 cities taking place in 133 countries. Events include cities from Mogadishu to Tehran and places like Iraq and Pakistan, allowing for a cross-cultural exchange of ideas reinforced by streaming transmission of events. Joi Ito, director of the Media Lab (MIT), explores how this prestigious institution understands and promotes innovation and Nick Martin (TechChange) outlines the basics of how this organization operates at the intersection between education, development, and technology to promote change.

Section Three, “Beyond innovation and social media”, starts by analysing the evolution of the concept of power with Anne-Marie Slaughter (New America Foundation). Power in a networked and hyper-connected world, she says, depends on how central your position is and how many connections (and information) you have. Recalling the chessboard paradigm of the Cold War, she says that we are at the outset of an Internet version of foreign policy that needs a new frame, analytics (flows), and tools (digital, including big data). Robert Kelley (American University) explores the implications of the growing number of actors taking part in world politics from outside the physical space and normative framework of traditional diplomacy. Technology has disrupted how diplomacy is done by changing the qualifier of an actor from status to capabilities. Kelly uses the Gramscian approach to ideas and hegemony to show how civil society and non-state actors can become the hegemonic bloc and mobilize people around an idea (although, interestingly, often they remain unaware of their power). Petrit Selimi (Ministry of Foreign Affairs, Kosovo) provides a detailed account of the overlapping of Kosovo’s efforts to be recognized as an independent country and recognition on the World Wide Web. The creation of the portal Digital Kosovo allowed each citizen, including the diaspora communities, to act as digital activists and diplomats to promote Kosovo’s presence in indexes and institutions online as a path towards independence and recognition in the “real” world.

The book is profusely illustrated with examples of digital diplomacy and the use of digital means in foreign affairs – from the first official e-mail sent by Bill Clinton in 1994 (to Carl Bildt, then Swedish Prime Minister), to Michelle Obama tweeting a selfie with the hashtag #bringbackourgirls or, on the other hand, Turkish Prime Minister Erdogan banning Twitter in the spring of 2014 to stop the circulation of undesired information about corruption. On another level, it is worth mentioning the development of an SMS-based disaster warning system in Bangladesh, or the use of mobile technologies to coordinate response and rescue operations after the 2010 earthquake in Haiti. In the printed versions of the book (paperback and hardback), nearly all chapters start with a QR code that can be scanned to access the video clip of the conversation as well as a website address.

To sum up, this book addresses to what extent technology and digital connections are changing diplomacy and foreign affairs, how governments and traditional diplomatic actors cope and adapt to a new landscape and how new actors play a growing role in both setting the agenda and proposing solutions for international problems. Although most experts agree that traditional diplomatic agents have lost control over the “spectacle” of diplomacy due to the emergence of plural digital spaces, there are disagreements about the real meaning of digital diplomacy. While some even deny its existence (because the core of diplomacy is still conducted as usual), others understand it as a complement to traditional diplomacy. Another point of contention refers to what is digital diplomacy (is it just communication or real diplomacy?).

In this emerging camp in which few established truths exist, this book is a significant effort to compile different points of view about trends and to provide a glimpse on how various actors deal with them. The structure of interviews makes the book readable and accessible, and the additional resources cited and suggested open avenues for further learning about the topic. In the course of the plethora of interviews compiled in this book, Andreas Sandre shows an in-depth knowledge of the latest facts, debates and trends in the subject area. Readers will find references to studies, books, websites, online tools and experts in the digital world, innovation and diplomacy (and all the different combinations among them). This is all the more important given that, as Sandre reminds us, we live in a world in which, in Africa more people have access to mobiles phones than to clean drinking water.

Mabel González Bustelo is an international advisor and consultant in peace and security, and Fellow of the Global South Unit for Mediation (BRICS Policy Center, Brazil).

The Iranian Protests: Change may not be immediate but is inevitable