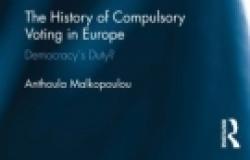 Massive electoral abstention is a persistent feature of many systems of voluntary voting. In the case of the forty-year-old democracy in Spain, voter turnout rates are quite low whenever it comes to referenda and European elections, but they are also low in local, regional and national elections. And this is so even when lately these elections have been preceded by a heated public opinion, and some of the indignation and disaffection that people felt during the last crisis has been channelled in part by emerging parties. Far from being exceptional, the Spanish case shares a trend with most established democracies.

Many political actors and political theorists alike see no problem in it. They can consider electoral abstention as a genuinely rational choice of individuals or as a functional and beneficial feature of our democracies, downplay it as an irrelevant phenomenon of our political life with an inescapable opacity, or even celebrate it as a “blessing in disguise” and as a depoliticizing activity to be imposed as far as possible. In contrast, many others see this situation as implying a set of problems that seriously affect the viability of our democracies, as well as the validity of our ideas of equality and justice. Among them, a number of researchers that argue that the solutions to these problems would necessarily involve electoral reforms advocate for introducing systems of compulsory voting. In fact, the issues of the justification and the legal enforcement of voting has become a matter of lively academic controversy in recent decades.

In The History of Compulsory Voting in Europe, Anthoula Malkopoulou, a researcher in political science at the University of Uppsala, weighs up the undoubted importance of these debates by situating them in a broader intellectual frame. A re-written version of some chapters of her 2011 PhD dissertation, Malkopoulou’s book not only pinpoints the arguments for and against compulsory voting today, but it provides a richer background of the European history of the principles, the narratives and the practices thereof. Moreover, hers is the first book to systematically apply the conceptual history approach to this end.

The book is divided into two parts. The first contains two chapters that respectively look into the contemporary debates on compulsory voting among political theorists, and the historical origins of the very idea and practice in Europe, from Greek antiquity until the 19th century. The review of current debates stresses the importance of compulsory voting as part of a wide, participatory and republican view of democratic liberty, as a bulwark of equality of political influence and indirectly against socioeconomic inequalities, and as an incentive for citizens to become more informed, interactive and deliberative. But Malkopoulou argues originally that “political moderation is perhaps the most important effect of compulsory voting” (p. 34) and “has been used diachronically as the main principle that justifies and motivates the endorsement of compulsory voting” (p. 37). In this vein, the historical views discussed in the second chapter bring to the fore motivations for compulsory participation such as the prevention of civil strife in ancient Greek democratic tradition and the preservation of local self-management in medieval laws.

The sensitivity to how the moderating effect served political depolarization and regime stability is equally central to the three chapters of the second part. In them, Malkopoulou examines parliamentary debates and other primary sources on compulsory voting in the cases of France and Greece since the nineteenth century, taking into account the political junctures, the historical actors and their strategic motivations and ideological interests. Chapters Three and Four focus on conservative and republican arguments in France from 1848 to 1946, the period when the convenience and desirability of introducing and legislating for compulsory voting were repeatedly discussed and dismissed. The nuanced reconstructions present a series of attempts to “organize” and “enlighten” the sense and the operation of universal suffrage and distinct understandings of the interplay of voting duties and rights. However, the panorama of recurrent proposals and failed constitutional reforms shows a convergent focus on the consideration of abstainers as generally peaceful holders of moderate beliefs and compulsory voting as a remedy or even an antidote against extremism. For French republicans and conservatives, albeit for different reasons, summoning to vote was supposed to produce true majorities and accurate representation.

The fifth chapter reconstructs three phases in the history of compulsory voting in the case of Greece, covering the attempts made in the twentieth century to introduce or enforce it. In addition to showing that the first attempts resorted to the projective appropriation of the participatory ideal of ancient Greece, Malkopoulou argues that the legal obligation to vote was a singular strategy to resist the instrumentation of voluntary abstention as a political weapon for the organized election boycotts both by the two main parties consecutively in the interwar years and by the communists in the postwar period. Interestingly, the politics of party abstention and electoral obstruction changed direction after the Second World War and consequently the defence of compulsory voting did as well, turning from being championed by the left in the first half of the twentieth century, to be promoted through the 1980s by the right. After these political contingencies, a gradual abolition process has ended in the purely nominal survival of some normative demands as a kind of constitutional relic or a vestige of an old and dubious prestige.

The falling out of favour of compulsory voting is also the prominent trend in most European countries. Nevertheless, for Malkopoulou, compulsory voting continues to be a trustworthy tool to increase representativeness and to counter rising extremism. Arguably, she could advocate for its application to amend certain electoral systems provided that a number of institutional preconditions are achieved, such as those the author tackles in the concluding chapter. Moreover, she emphasises the contingency and context-dependence of any compulsory voting reforms as inextricably situated in different political cultures, ideological interpretations and institutional histories. Among the relevant particularities to be taken into account, she mentions “the resulting experience of living within a compulsory voting system” (p. 160). Undoubtedly, many liberal societies that have no historical or recent experiencies of it presumably would be unwilling to accept it by majority.

Malkopoulou’s narratives illustrate that the realizations of the principle often reflect political ideologies and are time and again under suspicion of concealing electoral strategies or partisan contrivances. Suspicions about what parts are taking electoral advantage and about who is being damaged, apart from the extremists, will always be difficult to eradicate, especially in societies with no prior experiences of mandatory voting, as is the case with Spain. Even in the unlikely event that a parliamentary majority would force a reform and the constitutional rules would permit it, the application in those societies would still be imposed at the cost of an unbearable paternalism and would require a radical mutation of the political culture.

One of the many attractions of Malkopoulou’s book is the connection between scholarly research and the concerns of citizens. Malkopoulou currently works on a European research project on negative representation. This project in process shares with her book a trust in the self-correcting nature of representative institutions and electoral systems and their capacity to counter populism and technocracy as the undesirable trends across European countries. In my view, an undeniable merit of The History of Compulsory Voting in Europe is the honesty with which Malkopoulou puts expertise in the service of an inclusive democracy.

Francisco Javier Gil Martín is an Associate Professor at the University of Oviedo, Spain. His research interests include political philosophy, democratic theory and normative ethics.