Cape Town’s Day Zero may be the First, but it won’t be the Last 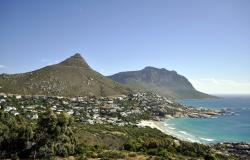 Four million lives could hang in the balance, but how Cape Town responds to her water crisis could set the example for cities around the world.

Four million lives could hang in the balance, but how Cape Town responds to her water crisis could set the example for cities around the world. Three years of continued drought in Cape Town, South Africa has nearly dried up the Theewaterskloof Dam, a key reservoir that used to supply half of the city’s water needs. Five other vital reservoirs have also been decimated by drought, all together – all of Cape Town’s reservoirs are only holding 26% of their storage capacity. Climate change is altering the expected norms of rainfall and water availability that allowed for the settlement of Cape Town in the first place. Earlier this year, we saw global headlines about Cape Town’s ‘Day Zero’, anticipated for last month. Thanks to some rainfall and hard policy measures to restrict water use in: agriculture, businesses, and residences – including tap shut offs – ‘Day Zero’ is looking a lot more like maybe this June, or perhaps sometime in 2019. It’s been pushed down the road, but it likely will still happen in the near future. Maybe it will be a 9/11 type moment for our climate, we’ll ask each other in crowded bars, ‘where were you when it happened?’

This is only the beginning. The sad reality is – Cape Town is not alone. It may very well be the first major global city to reach ‘Day Zero’, but it will not be the last. Thanks to science, we have enough tools at our disposal now to know just how climate change is redefining what ‘normal’ is for all of us. Droughts and deluges, super hurricanes, crazy winter bomb-cyclones are some of the many new climate realities we will have to endure – and are coping with right now.

Cities are where everyone wants to be. By 2050, 75% of the global population will call cities home. Also by 2050, we can anticipate 700 million climate refugees. Right now, cities across the globe are already feeling pressures on their water resources. Each has its own unique calculus for why vital water resources are being stressed. Climate change impacts us all everywhere, but in unique ways for each locality. We need local solutions to fight this global problem; while cutting emissions at every chance we get.

After the world was engulfed with headlines on Cape Town’s water crisis, the BBC and others came out with lists, citing the ten or so cities most likely to also run out of water. Some of those cities are anticipated to even be among the ten most populous cities in the world by 2030 – adding increased stresses to already strained water supplies. In twelve years, cities like Beijing, Cairo, and Mexico City can expect to have populations ranging from 24 million to 28 million each. To put that in perspective, London has a current population of 8.7 million, with the entire UK population at 64.6 million. So two and a quarter of these cities could easily engulf the entire population of the United Kingdom by 2030.

Globally, the WHO estimates that 850 million people lack access to safe potable water globally. Infrastructure leaks cost developing countries some 80% of their water. In the US, aging infrastructure has Americans loosing roughly 50% of potable water to leaks. We cannot combat the challenges of today with the aging and crumbling infrastructure of the past. We will need better water management and infrastructure that can support growing populations and limited resources. Luckily, there are swathes of new technologies available that would help us better manage vital water resources, in addition to the obvious of putting in better pipes. Still, potable water resources will continue to be in competition with industry and farming needs; we will need better water management and regulation in these arenas too, especially when it comes to pollution and runoff.

Centuries ago, we built our cities not expecting climate change to alter entire landscapes. This new climate and environmental reality where droughts are increasingly common and dry out lakes and reservoirs, where sea level rise allows salt water to intrude aquifers, where runoff from agribusiness and factories pollutes once potable water resources – this all increases the urgency to action. To achieve our Global Sustainable Development Goals on climate change and water, and to achieve and exceed stated Nationally Determined Contributions to the Paris Agreement – we need to act now to employ solutions that put communities first. This should be among the swathe of climate resiliency and adaptation measures brought to the fore this week during the Talaonoa Dialogue in Bonn. We cannot pass the buck. Tomorrow will be too late.

Sharing the Benefits of Asteroid Mining