After Protest: Pathways Beyond Mass Mobilization 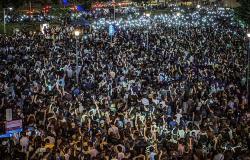 Protests convulse global politics, but it’s what happens when they die down that can really make a difference.

The last half-year has seen a startling cluster of protests around the world. Large-scale mobilisations have taken place in a staggering number of places including Algeria, Bolivia, Catalonia, Chile, Ecuador, Egypt, France, Georgia, Hong Kong, Indonesia, Iraq, Lebanon, Russia, Sudan and the United Kingdom. And these follow on the heels of protests in many other countries over the last five years or so.

These dramatic events now figure prominently in global media. The protests involve a wide range of citizens, including people that were previously not politically engaged. The revolts are increasingly a primary route through which ordinary people seek to bring about social, political and economic transformation. It sometimes seems that every week brings a new popular mobilisation to our screens.

There is a major problem, however, with the attention that such protests attract, especially at the international level. In the heat of revolt, local people’s involvement is high in energy and creativity. Civic and political organisations dedicate themselves to debating tactics and aims. International media attention is intense. And governments around the world debate with urgency how to respond as citizens take to the streets. But once a protest dies down, all this political, media and diplomatic attention tends quickly to evaporate.

This is a serious shortcoming because what happens in the period immediately after a protest is vitally important. Protests commonly occur in cycles. Nearly all the protests seen in the course of this year have been sequels to previous rounds of mobilisations. When a protest ends, activists and governments take decisions and formulate strategies that will influence the next phase of a country’s possible reform process.

Some of the current protests – like those in Algeria and Hong Kong – have kept going week-in-week-out for an incredibly long time. But all protests eventually begin to disband or scale back. This is the moment when protestors need to make difficult decisions. Do they simply disengage from politics or build new types of civic campaign? Do they move into existing political parties, build their own outfits, or steer clear of mainstream politics altogether? How do they retain and build a capacity to re-mobilize at the right moment in the future? And how do they protect themselves from the government repression that often follows in protests’ wake?

These are the kinds of decisions that determine whether mass protests lead to deep-seated change or are merely high-octane ephemera. Yet such post-protest dilemmas typically garner little debate. In recent years, analysts, journalists, civil society activists and international organizations have given much attention to protests, and it is right and vital that they do - this debate has helped protests to evolve, often in highly effective ways. But there is a pressing need to devote equal attention to the immediate aftermath of a protest. This is when any gains made by a revolt can either move to a higher political level or wither away.

Post-protest strategies can lead to one of three outcomes. Protests can serve as a platform for long-term political reform; they can fizzle out leaving little legacy in their wake; or most negatively they can be counter-productive in triggering a regime clampdown.

A new report from the Carnegie Endowment includes case studies from around the world that uncover the factors and decisions that determine which of these outcomes prevail. While many people celebrate the supposedly-leaderless nature of protests, reformers need to develop some kind of institutionalised decision-making processes and capacities over time. The nimbleness of contemporary protest movements is rightly celebrated as being crucial to their power. Yet what works as an asset in the midst of a protest can easily become a liability in the period when activists need to devise longer-term reform programmes and seek to turn the disparate energy of a revolt into a more tailored political strategy.

Another factor is whether protestors can stay united. Internal divisions readily appear among reformers once the unifying adrenalin of street action fades. When this happens, regimes find it easier to avoid or even reverse reforms after protests die down. In order to maintain civic momentum, activists need to look beyond the means of effective direct action and consider how to build bridges between the diverse range of actors involved in all of today’s protests. Where this happens, as in Tunisia, political reform is more likely to put down roots than where it does not, as in Zimbabwe for example.

After protest peaks, protestors also need to build a wider set of alliances within their own countries since they can find themselves somewhat isolated from other sectors which are also ostensibly in favour of change. This often means they need to develop some kind of relationship with mainstream politics. While in most cases protestors struggle with this challenge, there are examples like Taiwan’s Sunflower movement where the move from protest to politics has been more successful.

In some countries, the most serious challenge is for reformers to avoid the draconian repression that follows a protest. Some prominent activists have to lie low to avoid government attacks, and yet often they succeed in finding more covert ways to remain active in human rights issues. In some cases, like Egypt, they are working hard to find ways to do this, relabeling their activities and waiting for opportune moments to en-engage with more political strategies.

Where protests succeed in dislodging a regime, the post-protest period is no less important. In these cases, the most pressing dilemma is how to avoid co-optation. Protestors will nearly always be forced to work with members of the ‘old guard’ who can easily hijack a democratic transition. Armenia, Algeria and Sudan are all cases where civil society reformers need to maintain their current cooperation with new government figures while also retaining independence and an ability to mobilise again as and when democratisation falters – an un-enviably difficult combination to pull off.

These considerations are highly pertinent to the role that international actors can play in the post-protest period. When protests are in full-flow, outside actors need to move with the utmost caution. Regimes can easily smear protests with being engineered by outside powers. Western governments have doubtless been tepid in their responses to the Hong Kong protests, for example, due to their desire not to endanger commercial relations with China. But there are also sound tactical reasons for not engaging too heavily in the middle of a protest.

Instead, international pressure can be more productive in the period after protests. Outside actors like Western governments, the European Union or the United Nations can help bring different actors together to develop post-protest strategies. They can facilitate information sharing between protestors in different countries - of which there is a surprising dearth. They can also fund projects to improve cooperation between protestors and the formalised NGO sector.

International groups can provide protestors with technical assistance on how to move into party-politics, evade repression and link with different kinds of civic activism. And they can aim to ensure that mass revolts are not simply inconsequential turbulence but one integral part of their support for other areas of social, economic and political transformation.

In short, both the scope and the need for international support can often be greater just after a protest than during it. As a protest dims, the international community can and should step up its engagement. Yet in practice donors and international NGOs can all too easily have their focus drawn away to the next emergency situation as soon as the current revolt no longer dominates the headlines. International attention normally shifts elsewhere as protests in a given country begin to calm down, yet it is precisely at this moment when outside engagement can be most productive.

It is difficult not to be moved by what young activists in Hong Kong and elsewhere have achieved in recent months. However, it is important to keep in mind that it is when the crowds eventually go home that a lot of the really decisive politics and power-broking happens. The post-protest moment may not be as dramatic in media terms as the heat of a large-scale demonstration, but it is of vital importance in influencing whether protests are ultimately meaningful – and whether their impact is positive or less benign for democracy.

While activists in many countries have begun to pay more attention to their post-protest strategies, this is an area of civil society action that still needs considerable rethinking and fine-tuning. The calming of a protest should not be treated as an end-point but as the crucial preparatory beginning of a new phase of political activism.

To read the full report on After Protest, click here.

Richard Youngs is a senior fellow in the Democracy, Conflict, and Governance Program, based at Carnegie Europe and professor of international relations at the University of Warwick.Follow him on twitter @YoungsRichard

An Oscar for Parasite? The Global Rise of South Korean film

How to Decolonize Academia. Interview with Prof. Akosua Adomako Ampofo