Outline of a Peace Treaty 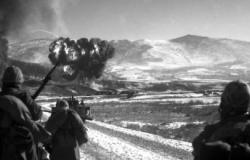 Following his previous opinion piece (available here), Dave Anderson sketches the contours of a US peace treaty with North Korea.

The North Korea crisis is the most critical crisis in the world today. The only way to resolve it is for Supreme Leader Kim and President Trump to both make concessions. Here are the four things that are needed for the crisis to be resolved:

Although there are other things to address, these are the four core things. How can these four things be achieved?

There needs to be a meeting, possibly convened by both China and Russia or even Germany. Trump and Kim do not have to attend the meeting, but it would be best if they did.

How can President Trump get to the point of accepting these four things? He should claim victory on the tax reform bill, which is sure to pass, and acknowledge that it is time to make a deal with North Korea. In short, he should use his pending victory at home to strengthen his ego. This should pave the way for him to exhibit some humility, recognizing that American presidents must give as well as take.

The more a leader wins the less threatened he is that he will fail as a leader. The tax reform victory therefore should lead the President to be less defensive and narrow-minded about how he approaches the North Korean crisis.

President Trump must accept that Mr. Kim will not give up his nuclear weapons and ballistic missiles under any circumstances, and that a war with North Korea, conventional and/or nuclear, could bring devastation to South Korea and Japan and possibly to parts of the United States.
In exchange for these concessions, President Trump will get Mr. Kim to freeze all tests on nuclear weapons and ballistic missiles, and he will be able to clearly state his threat to Mr. Kim that if he attacks us we will unleash a massive attack on him without Mr. Kim swinging back and saying that Mr. Trump is a lunatic, a dotard or a warmonger.

One the other side, Mr. Kim must accept that the United States would be acting fully within its rights of self-protection of unleashing a massive attack on North Korea if they attack the U.S. mainland and/or our allies South Korea and Japan. Mr. Kim must also agree to cease all testing of nuclear weapons and ballistic missiles, and thus essentially agree to stick with the nuclear capability he has and not improve upon it.

Both Mr. Trump and Mr. Kim need to look within and make a change of course, one that will get each of them what they most need. Mr. Trump needs to assert American power in the world and prevent us from a major war; Mr. Kim needs Mr. Trump to accept that North Korea is a nuclear power and is to be admitted to the elite group of nuclear states.

Both leaders also need to stop insulting and threatening each other. Everyone but these two men seems to realize that the insults and high school name calling has not helped the world to avoid another major war and possibly WWIII.

The four points on the Peace Treaty platform proposed here are admittedly very “rational.” The relationship between countries, one might counter, is typically not so rational. At the same time, the situation is “so complicated” that it makes sense to just state clearly what the core issues are. Some good old common sense at this stage would help this crisis come to an end.

In short, it may be best not to make the situation more complicated than it is. The chief challenge is to motivate the two leaders in this direction, leaders who are not known for their straightforward talk or actions.

For the sake of the world, they both need to change course.

Dave Anderson was a candidate in the 2016 Democratic Primary in Maryland’s 8th Congressional District. He is the Editor of Leveraging: A Political, Economic, and Societal Framework (Springer 2014). He can be reached at dmamaryland@gmail.com.