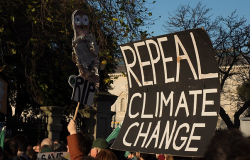 Five years ago, governments from across the world came together in Paris to chart a new course for global climate policy. The Paris Agreement put in place a ‘ratchet mechanism’ through which countries submit national climate plans in the form of Nationally Determined Contributions (NDCs), which should be reviewed and strengthened periodically.

In the past year, new and updated NDCs have been trickling in, but the level of ambition still falls short of averting the most dangerous climate impacts. On the brink of a new decade for climate action, however, we see some cause for optimism. Several of the largest emitting economies, including China, the EU, Japan, South Korea and the UK have pledged to reduce emissions to net zero by 2050 or 2060. The incoming Biden-Harris administration is also expected to commit to becoming net-zero by 2050. However, real climate benefits crucially depend on whether governments actually live up to their promises. While mid-century pledges are relatively easily made, governments need to align short-term plans and policies, including their NDCs, with longer-term commitments.

The Paris Agreement creates a set of mechanisms for updating these government commitments at periodic intervals. However, the agreement’s architects did not limit themselves to government action alone. Accompanying the agreement was a decision that underscored the role of subnational and non-state actors, including cities, regions, businesses, investors, civil society organizations and the transnational initiatives and networks in which they are engaged. These ‘non-Party stakeholders’, the drafters recognized, can help drive domestic ambition, engage in efforts to mitigate greenhouse gas emissions and boost climate resilience, and bolster action by states and international organizations at the global level.

These activities are flanked by other efforts to orchestrate non-state and subnational climate action, including the 2014 and 2019 UN Climate Summits hosted by the UN Secretary-General, and the 2018 Global Climate Action Summit convened by former California Governor Jerry Brown. In addition, thematic events and Regional Climate Weeks have been held in Africa, Latin-America and the Caribbean, and the Asia-Pacific region. Most recently, the Race to Zero campaign has seen cities, regions, businesses, investors and universities commit to net-zero carbon emissions by 2050, despite a global pandemic and massive economic fallout.

Five years after the Paris Agreement, how have these functionally and programmatically linked activities to mobilize non-state and subnational actors - which we refer to as the ‘Global Climate Action Agenda’ (GCAA) - fared? In a new article, we evaluate the progress under the GCAA along four criteria.

First, efforts to drive non-state and subnational action should be collaborative by sharing design and operational responsibilities between key orchestrators, including the UNFCCC Secretariat, COP presidencies, other international organizations, subnational and non-state actors, and governments. Where collaboration occurs, we should see multiple orchestrators coordinating their efforts to mobilize and record the efforts of others. Here we find some progress has been made. The new Climate Champions, for instance, have helped to broker action and link efforts. The Global Climate Action portal has facilitated the monitoring of commitments. By and large, however, this coordination remains event-driven rather than systematic.

Second, efforts should be comprehensive in that they mobilize climate action across the broad landscape of subnational and non-state engagement. Again, we find that this has occurred to some extent. Through collaboration between the UNFCCC Secretariat and external data partners, thousands of commitments and actions by non-state and subnational actors have been recorded, reflecting the scale and range of the activities underway. However, raw numbers tell only part of the story. Some sectors, such as aviation and fossil fuels, are underrepresented, as are adaptation actions.

Third, efforts should be evaluative by creating common methods and benchmarks to help governments and other actors assess progress. In recent years, progress has been made on methodologies to evaluate the impacts of subnational and non-state commitments. To harmonize data collection and methodologies, the UNFCCC Secretariat regularly convenes the ‘Climate Action Methodologies Data and Analysis’ (CAMDA) group. However, evaluations still focus heavily on mitigation, rather than for instance adaptation or the sustainable development co-benefits of climate action. Moreover, evaluations of the actual impacts of non-state and subnational climate action, rather than expected impacts, are essential for the credibility of such action.

Lastly, efforts should be catalytic, meaning that they generate and deepen climate action, particularly in thematic and geographic areas where more action is needed. So far, major efforts along these lines have been undertaken. A large number of actions are being recorded, and new initiatives, like the UNFCCC’s Lighthouse Awards, have been created to incentivize ambition and facilitate implementation of commitments. Still, the impact of these international orchestration activities remains unclear. Moreover, it is plainly evident that there is an under-representation of non-state and subnational climate action in developing and emerging economies. This is problematic, as most future greenhouse gas emissions are projected in the Global South, and many developing countries are also among the most vulnerable and should benefit from non-state and subnational climate adaptation actions.

Based on our evaluation, we identify three areas that require greater attention:

A post-2020 GCAA should accelerate national-level implementation, amplify the ambition of NDCs, and inform countries’ long-term strategies for mid-century low-carbon development. Ambitious non-state and subnational actions could give governments the confidence to adopt more ambitious targets and can serve as experiments that can be expanded and scaled up at the governmental level. NDC labs, for instance, could help governments strengthen their capacities in specific areas. At the regional and national levels, context-dependent and nationally specific collaboration can further foster closer collaboration between governments, non-state and subnational actors. For example, the Alliances for Climate Action initiative aims to create supportive constituencies to encourage collaboration and to foster learning at the national level. Such efforts would go some way toward ensuring that non-state and sub-national actors have a broader impact on climate action, and the GCAA can help by expanding and improving on these sorts of initiatives.

The GCAA emphasizes the need for greater action in developing and emerging economies. But it has yet to achieve a balanced geographic representation. To ensure this, regional and national processes could play a complementary role to the GCAA by enabling the participation of local stakeholders and by reducing language and logistical barriers, while providing more targeted and contextualized frameworks for discussion. In Latin America, for example, ActionLAC has helped to build the capacity of state and non-state actors to take meaningful climate action by assisting them from the initial planning of actions to the integration of contributions into more ambitious NDCs, taking into account the local context. Expanding on these experiences and extending them to other regions could help to encourage broader and deeper participation from non-OECD actors.

Non-state and subnational climate action can yield benefits to society, environment and economies. Widespread biodiversity loss, ecosystem degradation and climate change pose inter-related threats that exacerbate one another, for instance, leading  to increased risks to food security. ‘Ecosystem-based’, ‘nature-based’ or ‘planetary health’ approaches can all help maximize synergies and manage trade-offs between different sustainability aspects, and contribute to the simultaneous achievement of various Sustainable Development Goals (SDGs). Multiple platforms in the UN system are already engaging subnational and non-state actors across multiple issue areas through orchestration. While these platforms are separate, collaboration between the GCAA and other orchestrators could demonstrate synergies between climate action and the SDGs.

As the world seeks to recover from the COVID-19 crisis, a well-designed post-2020 GCAA can help governments meet and enhance their climate commitments, strengthen the subnational and non-state capacity for action, and help realize sustainable development. Although the first five years of the Paris Agreement has successfully generated an unprecedented number of commitments by state and non-state actors, a post-2020 GCAA needs to help translate state and non-state promises into tangible action. With the above recommendations, we can once more reinvigorate global climate politics and increase our chances to realize a timely transformation to a net-zero and climate-resilient economy.

Harro van Asselt is a Professor of Climate Law and Policy with the University of Eastern Finland Law School, and a Visiting Researcher with the Copernicus Institute of Sustainable Development at Utrecht University.

Sander Chan is a Senior Researcher at the Global Center on Adaptation and the German Development Institute/Deutsches Institut für Entwicklungspolitik (DIE), he is also Adjunct Assistant Professor at the Copernicus Institute of Sustainable Development at Utrecht University.

Idil Boran is an Associate Professor at the Department of Philosophy and Faculty Member at the Dahdaleh Institute for Global Health Research, York University and Associate Researcher at the German Development Institute/Deutsches Institut für Entwicklungspolitik (DIE).

Lukas Hermwille is Project Coordinator at the Wuppertal Institute for Climate, Environment and Energy and PhD candidate at the Institute for Environmental Studies (IVM) at Vrije Universiteit Amsterdam.

Charles B. Roger is an Assistant Professor at the Institut Barcelona d'Estudis Internacionals (IBEI).#