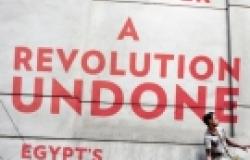 There is much to commend in H.A. Hellyer’s study of a revolution gone wrong, but the most compelling aspect of this highly readable book is the weaving of a personal journey within a broader analytical narrative. Hellyer, whose father is English and his mother Egyptian, makes his intention absolutely clear from the moment the book begins: “I step off Egypt Air flight MS 778 from London Heathrow arriving in Cairo. It is a flight I have taken many times and I do not imagine this trip will be much different from others.” The date however is significant – 1 December, 2010. Hellyer, though he did not realize it at the time, was just weeks away from the Tahrir Square revolution that swept the Egyptian president Hosni Mubarak from power.

From an initial scepticism about the revolution, Hellyer moved to a position of acute observer, “an entrenched witness on whom the revolution had a profound effect.” His, then, is a voice that stands as engaged and committed while at the same time detached from the momentous events unfolding around him. That duality serves Hellyer well as he negotiates both his own journey of understanding and the complex currents of the revolution in those early heady days of January, 2011 and in the years that have followed.

Usefully, Hellyer rejects the binary and dominant narratives that have emerged from the revolution: the one that the military and the deep state were protectors, defending Egyptians from the theocratic fascism of the Muslim Brotherhood, the other that the Muslim Brotherhood were protecting and defending the people from the fascism of entrenched state organs. Neither stands up to the scrutiny of Hellyer’s sometimes pitiless gaze.

He is harsh for example on the young revolutionaries who, though they had commanded the heights of a truly popular revolution, squandered their gains by being unable to agree a candidate for the country’s first free and open presidential election. Further they “not only failed to construct fully developed political platforms but had also comprehensively failed to engage with Egyptian citizens.” They were, to his mind, lazy in dealing with the wider political narrative and when they did emerge from their upper class neighbourhoods they “invariably were incapable of connecting efficiently with those that they sought to affect.” He does, however, allow that given the short time frame it is perhaps unreasonable to expect the revolutionaries to have acquired much political maturity.

Even so, the greatest failing was that of not agreeing a candidate who could challenge both the Muslim Brotherhood, in the person of Mohamed Morsi, and Ahmed Shafiq, Mubarak’s last prime minister. Had they united around a single revolutionary candidate in the first round, Shafiq, in Hellyer’s opinion, would never have gotten to the second. The voters would then have had a choice between the past as represented by the Brotherhood and a future shaped by the events of Tahrir. In the end, they were forced to choose between the lesser of two evils, and the inexperienced and colourless Morsi became Egypt’s first democratically elected president June 30, 2012.

Morsi’s mistake and that of the Muslim Brotherhood echelon was to make the assumption that a win as president meant that he had inherited the mantle of revolutionary with the full support of the Egyptian people. In fact, many in Egypt were deeply wary of the Brotherhood and Hellyer argues that if Morsi was a true revolutionary he would have incorporated many more voices into a government of national consensus. Instead he attempted to seize the opportunity to reinforce the hegemony of the Brotherhood. While acknowledging some of Morsi’s successes such as the ceasefire he negotiated in November 2012 between Hamas and the Israelis, Hellyer is remorseless in uncovering the blunders of a leader who lacked both political nous and experience.

From his initial failed attempt to replace Mubarak’s prosecutor general Abd el-Majid Mahmud, to his arbitrary effort to drive through constitutional changes that radically enhanced his power and authority, Morsi failed to see the popular tide running strongly against him and the Muslim Brotherhood. The economy was in freefall and poll after poll was showing that the Egyptian public was losing trust. Mulishly, Morsi refused to believe the evidence of disaffection rapidly piling up around him. The military, on the other hand, saw it for what it was: an opportunity to retake power.

Morsi’s defence minister General Abd al-Fatah al-Sisi was known as an observant Muslim. In another of his many miscalculations, Morsi had taken Sisi’s devoutness as a sign that he was, if not an actual supporter of the Brotherhood, at least well-disposed to the ideology. In fact, as Hellyer notes, Sisi “was not MB-friendly at all: he was a conservative, ritually observant Muslim, who was fiercely loyal to the military and the Egyptian state.” The coup that brought Morsi down a year to the day from his election as president was orchestrated by the defence minister he had appointed. It wasn’t long before the military and Sisi regained the upper hand and became, as they had been under Mubarak, the dominant force on the Egyptian political landscape.
Hellyer notes that for many Egyptians the military is held in high regard. He rightly laments the ferocious crackdown on civil liberties and the demise of democracy that Sisi’s rule has brought about. But he is a pragmatist ready to acknowledge that the fragile state of the economy, coupled with a fragmented opposition, means that Sisi is likely to remain in power for a long time to come.

He eloquently and movingly regrets the huge number of deaths occasioned by the revolution and by the coup that overthrew Morsi. Hellyer concludes a chapter entitled “Weeks of Killing” with a list of those who died between the dates of January 2011 and October 2013. It includes incidents such as the killing of 27 Coptic Christians by the military in October 2011 and the horrific massacres at Al Nada and Raba’a of up to 1000 pro-Morsi protesters.

In honour of all those who have died, he memorializes some by name: the eminent religious scholar Emad Effat who was shot and killed by security forces in December 2011 and earned the sobriquet shaykh al-thawra, shaykh of the revolution, and of whom Hellyer says “since his passing no one else has been bestowed with that banner. No one could;” the revolutionary blogger Bassem Sabry who died tragically by accident at the age of 31, a man who in Hellyer’s words “wanted to help build that concept of citizenship, where all Egyptians and all Arabs could genuinely claim that there was an equitable social contract between ruled and the ruler – where, indeed, they were citizens;” and finally the poet and activist Shaimaa al-Sabbagh shot in the back by a security officer whilst on her way to a peaceful demonstration on the eve of the fourth anniversary of the 25 January revolution. She was “a peaceful citizen of Egypt ... shot dead by a security establishment meant to protect her.”

In naming them he resurrects the hope that Tahrir brought to millions of Egyptians. That hope though faint has not been vanquished. Revolutions may be undone, but they are never fully lost and in this superb recounting of Egypt’s days of revolution, H.A. Hellyer has done a great service to those who, like him, are keeping the flame of freedom burning.

Bill Law has reported extensively from the Middle East for the BBC. He now runs TheGulfMatters.com, providing analysis and journalism about the Gulf States and the wider MENA region, and is a regular contributor to Middle East Eye, Gulf States News, The Independent, the New Arab, the BBC and Monocle Radio. @billlaw49