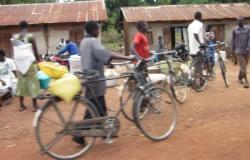 Using the case of Uganda, Karl Muth argues that donors interested in developmental paths should focus on debilitating, yet addressable, macroeconomic factors.

This week, I received many emails from friends in Uganda about that country’s currency woes. Indeed, the Ugandan shilling has taken its biggest hit in years, losing almost 35% of its value. Some of the causes are familiar (treasury mismanagement, paying current-period expenses with the printing press, a regime with an unusually-repellent effect on foreign investors), while some are unique to the contemporary scenario (low oil prices effectively eliminating interest in exploration in northern Uganda).

When I first visited Uganda in 2010, the “street price” of the Ugandan shilling was around 2350 shillings to buy a dollar, while a dollar bought around 2200 shillings. When I moved to Uganda in 2011, my agreement with my landlord fixed the exchange rate of any dollar payments at a 2500 UGX exchange rate (2500 shillings to the dollar) as my attempt, in drafting the lease, to hedge any interim inflation in the shilling. Today, a dollar will buy about 3600 shillings and many friends in the region (including an ex-Goldman Sachs analyst) are calling for 4000 by year-end.

The effects of this kind of inflation are disastrous in terms of progress on nearly all of the metrics government aid agencies, NGOs, and philanthropists hold dear. Not only does this destroy domestic savings at a rate nearly no other event achieves, but it decreases earning power at a rate that significantly outpaces the devaluation of the Chinese yuan (most Ugandans buy Chinese goods for their day-to-day needs, from hand tools to dish soap). It also destroys businesses that operated on slim margins trading at local markets like the cuk ma dit in Gulu Town, where I used to shop twice weekly for items, all items on offer save produce having been imported from China or India.

But – perhaps most disastrous for the international development community – the real value of savings accounts, the max payout insurance products (almost always denominated in local currency, particularly in the case of crop insurance), and other components that make up the microfinance ecosystem have been violently sabotaged by treasury mismanagement and government incompetence. Small, community-level institutions that people depend upon on a daily basis are crippled by macroeconomic uncertainty and financial governance failures. Trust between merchants, counterparty credit accounts, and other important financial intertwinings are severed.

This leads to my main question.

Rather than focusing on drilling boreholes, building schools, and providing bicycles – all of which are no doubt helpful and needed in many places – shouldn’t the hard-currency donors driving this development push instead focus on macroeconomic factors? For instance, it would not be all that difficult for American donors – even a bloc of non-governmental donors – to band together and force Uganda to use the US dollar as its currency and to phase out the Ugandan shilling. Or to insist on reasonable regional economic policy. Or to make the availability of credit from aid agencies contingent upon well-managed credit elsewhere in the Ugandan public and private sector.

These ideas are not new. And a scheme of strings-attached aid, dollarization, and governance auditing would not solve everything, but taking these issues seriously and combating the sources of short-term inflationary pressure – for the first time in Ugandan history – would eliminate a source of uncertainty that not only hurts the everyman Ugandan, but undermines the credibility of the government that supposedly represents him. While I am generally not in favour of aid that includes strings, earmarks, and restrictions, requiring that the ambient macroeconomic conditions not endanger the health, safety, and well-being of a country’s residents does not seem wholly unreasonable.

How has Covid changed the picture on Aid/Development Jobs?