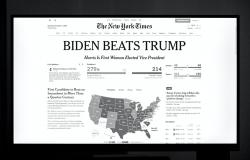 Cornelius Adebahr argues that a return to an old, pre-Trump, transatlantic mindset will not adequate to address contemporary global policy challenges.

Even though the repudiation of Trumpism failed to fully materialize in the recent US election, many Europeans largely expect a return to the ‘good old days’ under President-elect Joe Biden. And those policymakers who profess to know differently, cannot quite explain how their government would rise to the challenges of a different transatlantic relationship, let alone a global system under strain.

Obviously, manners matter. The realistic expectation that Biden would again consult US allies on important issues is already a consolation after four years of being treated as a foe. And knowing that the next US President will aim to restore his country’s global reputation as a reliable partner is reassuring. However, such appearances cannot paper over not only the hardening policy differences between America and Europe, but also the shifting global power relation that will not allow for a return to some idealized status quo.

First, if the chances of a “transatlantic reset” depend on who the next US president is, their actual revival hinges squarely on what the Europeans are willing to do. To put it in very simple terms, Biden will only have to signal that he wants the allies to be partners again, but the latter will have to deliver.

For Europe, this setting presents a three-fold challenge: of its readiness, its abilities, and its strategy. If ‘burden-sharing’ in the past was thought of mainly in security terms, meaning that European countries in both EU and NATO would have to spend more on defence to close the gap with the Americans, it now implies that they will have to chiefly take care of any and all crises in their neighbourhood for which they can hope to receive US backing. Think of the Libya intervention in 2011, except thought through to the very end (which is not yet near today).

Here, Europe clearly isn’t ready to shoulder its share of the burden – let alone able to do so. For all the talk about ‘European sovereignty’ over the last couple of years, the ‘European pillar of NATO’ isn’t where it should be. Yes, a number of improvements have been made, from strengthening defence cooperation among member states through permanent structured cooperation (PESCO) to setting up battlegroups and civilian capabilities to better equip the EUs rapid response toolbox. The great leap forward for European policymakers and strategists would be to acknowledge that Europe’s strategic autonomy is actually in the transatlantic interests – because without it, there cannot be real partnership between the United States and its European allies, only extended dependency.

Similarly, on trade, frictions will persist. True, spats over beef and Boeing/Airbus are a staple of transatlantic relations, and few expect the contentious talks over TTIP to resume anytime soon. Yet, from agricultural products to the digital economy – taxing global companies as much as setting the rules for their services – to managing China’s expansion, the list of topics where Washington and European capitals don’t see eye to eye is long. Worse, even EU member states do not share the outlook on how to tackle those challenges, and the last four years simply – but wrongly – allowed them to assume that the problem was sitting in the White House.

This is where strategy comes into play and meets the crumbling multilateral order. Hard as it is for (West) Europeans to accept, but the world order of the past 70 years will not continue to shape the planet’s next 70 years. Life is dynamic, things don’t stay the way they are (even if some would like them to), and whether it’s by our own shortcomings (such as failing to reform European democracy and the capitalist system) or by others’ aspirations (China, India, Brazil and the like asking for a bigger say in world affairs), Europe’s global weight has been shrinking.

The current pandemic is shaking things up, and while both the ‘old continent’ and the ‘new world’ seem to particularly struggle with it internally, if offers them a chance to set things right at the global level. America and Europe together can show the value of the multilateral system they helped create by forging a global response to Covid-19 – and by strengthening the one to climate change and digitization in its wake. Confronting China, standing up to Russia and other authoritarian states, and defending the existing global order are all worthy goals for Western democracies – however, they have to be substantiated by real-world policies producing results that are deemed superior to other systems.

The Top 3 for a renewed transatlantic tandem should thus be global health, climate action, and digitization. The first includes pandemic preparedness in particular, but also more broadly the creation of functioning global structures to respond to future health crises. The second hinges on an effective decarbonization of energy (with consequences for industry, mobility, leisure and the like) under the Paris Accord, where the merging of the New Green Deal and the European Green Deal appear feasible not only in words. Lastly, setting the standards and norms for the digital world will be among the most difficult tasks, not only because there are few global institutions in this field but also because the pace of development is huge – topped only be the likely benefits for those who are boldest on anything from Artificial Intelligence to Big Data to Cyber Defence, be it companies or countries.

None of these challenges can be dealt with by an old transatlantic mindset. But fresh thinking combined with the willingness to join forces on both sides of the Atlantic will go a long way to getting global partners on board. If Europe still believes in an effective multilateralism and if President Biden is indeed an instinctive multilateralist, the two should not let this – likely last – chance pass to reinvigorate the global order by imbuing it with the capability to “build back better”.

Photo by Andrew Neel from Pexels