What does it take to hold Shared Responsibility for the Arctic Region? 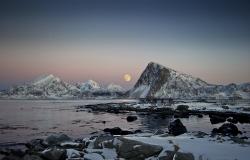 Several states have declared that the Arctic is their shared responsibility at a time when global warming changes the Arctic landscape and attracts the interests of states and corporations from outside the region. Hannes Hansen-Magnusson discusses implications and potential pitfalls of making such a declaration, showing that responsibility is deeply political in its effects. In order to assume responsibility proper, states will need to widen the current formal and informal diplomatic network while facilitating the reconciliation of a diversity of viewpoints within and beyond their own borders.

In November 2020, the foreign ministers of Sweden, Finland, Norway, Iceland as well as the Kingdom of Denmark, including Greenland and the Faroe Islands, published an article titled “The Arctic: our shared responsibility”. The short text comes amid a series of updated national Arctic strategy documents that the Nordic states will release in the coming months. The recent communication emphasizes commonalities among these states, which are said to form a community of shared values that include “rule of law, democracy, human rights, transparency, equality — including gender equality — social prosperity, sustainability and environmental protection”. As members of the Arctic Council, the ministers identify as their responsibility to settle disputes “through peaceful means and with respect for international law”; to ensure prosperity for the 4 million local and Indigenous people in the region through sustainable economic development; and to mitigate the impact of the climate crisis by fulfilling the 2030 Agenda and the Paris Agreement through a green transition after the Covid-19 pandemic. The statement tacitly emanates from acknowledging the conditions of the Anthropocene, which emphasizes the human impact on geology and ecosystems, while advocating inclusive dialogue to address this development. But what is involved in declaring the Arctic their shared responsibility?

Responsibility in the Arctic

Referring to the Arctic as an object of shared responsibility happens at a time when responsibility has become a core concept of global politics over the course of several decades. A substantial part of its rise can be attributed to an expansion of human rights norms and changed relations between states and their citizens. As what is probably the most widely known example, the so-called “responsibility to protect” makes the prevention of genocide and comparable mass atrocities incumbent upon other states if a state fails to protect its own citizens. While this example shows how responsibility has become deterritorialized, it is also no longer exclusively the remit of states. As the UN Guiding Principles on Business and Human Rights seek to prevent, address and remedy human rights abuses committed in business operations, multinational corporations have begun to play a more formal role in global as well as local politics. Not only were corporations extensively consulted when the Principles were drafted, they are also substantially tasked with their implementation.

All of this goes to show that responsibility is far from an inconsequential concept in global politics. Invoking responsibility puts someone – individual or collective – in charge of something, which we can refer to as a process of responsibilization. Responsibilization in itself is not neutral because it is explicitly or implicitly justified with regard to normative principles, including why someone else should not take responsibility or what else someone is not responsible for. In the case of the Arctic states, the justification rests on geographical proximity and identifies established forums, such as the Arctic Council or the Barents Euro-Arctic Council, as appropriate institutions. But are these the appropriate venues for achieving their aims?

Indeed, in the Arctic region, we can identify an extended web of diplomatic forums through which the pledge for responsibility can be turned into policy.

The forums vary in the extent to which they are formally institutionalized but their common denominator is their inclusivity of a variety of actors. They include states but also a range of non-state participants, such as business and industry, civil society and indigenous representatives. The Arctic Council is unique in global comparison in that the so-called Permanent Participants of the six Indigenous groups are to be consulted on all initiatives and thereby could effectively veto states’ plans. Other forums, such as the Arctic Circle or Arctic Frontiers assemblies, have been compared to bazaars, offering an informal stage for states and non-states actors. The extensive list of sponsors, friends and associated partners includes governments from all over the world as well as businesses and NGOs whose agenda might seem categorically incompatible, for instance on the issue of fossil vs. renewable energy use. Yet, the list is a testimony of the multitude of viewpoints from which the Arctic is approached from within and outside the region. Arctic states need to determine whether they can achieve their aims through existing diplomacy networks while preserving the values they hold dear.

Challenges for Anthropocene Diplomacy in a Community of Responsibility

Forging a ‘community of responsibility’ in this context would be no mean feat as there are at least two challenges to be overcome. First, there is the question of whether the web of forums extends wide enough. The Anthropocene condition through which the Arctic’s geophysical appearance changes requires global efforts to mitigate its effects. As a result, ‘Anthropocene diplomacy’ requires global efforts that are inclusive with regard to the diversity of stakeholders – and the Nordic ministers implicitly acknowledge as much when they correctly identify that the main sources of greenhouse gas emissions lie outside the region. They can approach building this community on the backdrop of past climate agreements, through which ‘common but differentiated responsibilities’ became part of the conceptual inventory of international law. Notwithstanding issues that arise from differential treatment in international law and from implementing the particulars of the climate agreements of recent decades, Nordic states share at least some common ground with actors from outside the region upon which to expand their efforts. Given the many ways in which Arctic climate seems to matter for regions elsewhere, preserving Arctic climate, or at least abating the rate of change, Arctic states could present this as a common concern of states outside the region as well.

The second challenge pertains to the differentiated responsibility states might need to address internally. As much as the Arctic may matter to national identities, regional electorates may exert pressure to create incompatible policies: large-scale infrastructure projects may benefit the country as a whole or regions in the south, while their impact may be disadvantageous to local or Indigenous communities. In other words, a responsibility towards boosting gross national product and employment rates nationwide may be difficult to reconcile with responsibilities towards local ways of life that are situated at the periphery of the state or which concern future generations. This tension is already beginning to show in several court cases across Scandinavia and is likely to raise further constitutional questions in the coming years.

In light of these two challenges, shared responsibility evidently requires addressing the issue of differentiated values, interests and identities within and outside the region. While projects such as Justnorth are working to provide a toolkit for exploring and mapping the multitude of ethical value systems in the Arctic region, in engaging in Anthropocene diplomacy responsibility should be inclusive for all parties affected by its change. In responsibilizing the Arctic, it is the onus of states to build upon existing infrastructure for dialogue among a diverse set of actors which operate in the region and to further explore the common ground that may proof fertile for creating a sustainable community of responsibility.

Hannes Hansen-Magnusson is Senior Lecturer in International Relations at Cardiff University. He is co-editor of “The Rise of Responsibility in World Politics” (Cambridge University Press 2020, with Antje Vetterlein) and co-PI with Corine Wood-Donnelly of two case studies on sustainable economic activity in the Arctic region within the “Justnorth” consortium (Horizon2020 grant No. 869327). He hosts the Arctic Relations blog (www.arctic-relations.info) and tweets under the handle @HansenMagnusson.