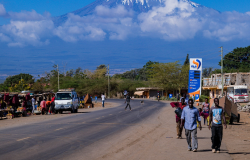 Grant W. Turner argues that the West needs a joined-up and just strategy to engage Africa or it risks losing influence to other powers fast making allies on the continent.

The Heartland is defined by geographic features which have historically allowed various land powers to reign supreme over the bulk of the Eurasian continent thanks to terrain buffers from opposing armies and navies. From the protected interior, a Heartland power has a greater chance of controlling the population and trade centers of the peripheral “Crescents” (a.k.a. Rimlands). Consequently, it will have the military and economic might to dominate the “World Island,” and then the planet (see this video explainer).

There are many critiques of Mackinder’s theory, however one angle is conspicuously absent. Unless you’ve read Mackinder’s Democratic Ideals and Reality (1919), the way Mackinder and geopolitics are taught results in the nearly ubiquitous misconception that Eurasia has the only Heartland. Strikingly few experts, at least in English, acknowledge that Mackinder actually identified a second Heartland: Sub-Saharan Africa.

The result of this misconception is two-fold. First, even if the theory is rejected, the tendency to view the Eurasian landmass as paramount to the balance of power remains. Second, the resulting blind spot compliments common stereotypes that cause people to write off Africa as a resource to be exploited, dominated, pitied, and saved.

As the new scramble for Africa once again emerges as a point of discourse, the importance of the continent’s geography as a whole must be understood as potentially equivalent to that of Eurasia’s. Africa is far larger than most maps imply; it can fit the U.S., China, Japan, India, and much of Europe, all combined inside of it. The landmass contains 24% of the world’s agricultural land, 30% of its known mineral resources, and 10% of the planet's known oil and natural gas reserves. Its population is booming (42% of world’s youth by 2030), highly entrepreneurial, and has made great strides in human and industrial development. Thus, it is not an accessory to power, but a potential power center. Any strategy that does not grasp the value of the continent, and appropriately acknowledge the dignity (see also), agency, and diversity of its peoples is doomed to fail at 21st century great power competition.

Shifts in power and strategic missteps by the West have given rise to China as a global leader, and a real potential for Eurasian Rimland and Heartland powers to cooperate against Western interests. China and Russia’s mutual suspicions and tendencies towards competition do not negate their desire to keep other powers out of Eurasia and their perceived spheres of influence. In fact, controlling access to Eurasia and the waters around it are a strong point of partnership. Thus, it’s possible, if not likely, that a so-called illiberal order led by China and Russia could deny outside influence in most of Eurasia and solidify their own; this is still a problem even if it’s unlikely that Beijing and Moscow will ever completely dominate Asia. Further, there are reasons to believe that China will become more expansionist, if not seek global primacy, establishing its own world order.

Either way,  significant challenges to Chinese regional hegemony are unlikely given that a full scale rollback, regional rollback, or invasion of China is already considered too costly, and will only become more so. Similarly, it is difficult to successfully employ wedging strategies against China’s increasing influence over the Heartland and much of the Asian (and increasingly global) Rimlands. This is largely the case due to its influence via the Belt and Road Initiative (BRI), water supplies, vital resources, investments, and its eagerness to help authoritarian regimes.

So, let’s assume that a.) Mackinder’s theory matters (despite valid critiques – see one and two), and that b.) Aforementioned factors make it too difficult to implement the proposed countermeasures (i.e. one and two) to China’s grand strategy.  Under these assumptions, the Eurasian Heartland and much of its Rimlands will be out of reach for the West, but what of the Southern Heartland?

In a world order dependent on allies and resources, Africa matters; likely more than it did in the previous great power competition. China has long had relations with Africa, but its BRI drastically increased the scale and complexity of ties, and it may have recently surpassed the U.S. in public opinion. Now, Beijing is building up a variety of military bases and partnerships throughout Africa, joining Russia (see also) deep in the continent. It is also expanding its network of dual-use ports (naval bases), with Nigeria and Equatorial Guinea being prime candidates in the Atlantic.

These two nations are not alone. Rising non-African powers with ambivalence towards the West are similarly striving to establish themselves on the continent. Perhaps most notable are Türkiye, India, and Brazil. Their power-balancing roles, ambitions, and potentially anti-Western partnerships with Russia, China, and various African nations are underappreciated factors (see one, two, and three).

Appreciation of Africa’s strategic importance amongst policy makers and academics in the West has been improving, even attempting to move beyond negative stereotypes and neocolonialism, however the U.S. and the West must do significantly better. The West and its strategic partners cannot afford to write-off Africa due to racist impulses.

For now, China and the U.S. are perceived somewhat similarly on a nation by nation basis in Africa (meaning that while perceptions vary across nations, they are close within each nation). Similarly, despite some pushback for its invasion of Ukraine, African governments and peoples remain divided in their views of Russia relative to the U.S., with some, such as Nigeria, potentially being pushed further towards Beijing due to sanctions on Russia. This is both a problem and an opportunity.

As China establishes itself economically, politically, and militarily in Africa, regularly making major material and symbolic improvements, the U.S. and the West might lose out on all fronts. However, Beijing and Moscow have their own weaknesses when it comes to how they interact with the world, often breeding resentment. The West has been in this position before, and if it can learn from its past, it can leverage these weaknesses.

That is to say that military aid, might, and coercion cannot be the primary means and ends of an African focused strategy. The West and its strategic partners must deploy soft and just power, beginning with beating China and Russia at their own economic games. They also must leverage their native and immigrant African populations, enhance the stature and influence of the continent’s nations (particularly in global organizations), and end the stereotypes of the continent as a hopeless, helpless, risk only worthy of charity.

In short, the West risks significantly reduced access to Africa. It’s not that Beijing and Moscow are not performing their own colonial projects, nor is it simply that the West’s colonial impact is so well known (and still in effect) that China may be able to outmaneuver it. The facts are that the interests of those in power still reign supreme, and that soft and just power matter on the local and global stages.

China recognizes this, but is arguably clumsy and insincere with the latter two. What soft power Russia has in Africa is rooted in its image as a counterweight to the West from the Cold War, failures in liberal reforms, and, more importantly, its consistent commitments to African leadership over the past decade, which contrast sharply with Western engagement. That being said, Moscow's influence suffered from mismanagement before its invasion of Ukraine and seems unlikely to improve, at least for some time.

It’s time to flip the paradigm. The West certainly has a history of insincerity and compromised integrity, but I would argue that the West and its strategic partners are also more capable of turning things around. Western governments can build true friendships and equal partnerships with African nations, instead of continuing neocolonial policies and attitudes while making empty gestures of decolonization.

This argument can even be made in terms of mutual national interests (see also), as opposed to flowery idealism. Thus, there is no reason the West can’t commit to casting aside and repairing the harmful dynamics. It’s possible to both recognize and deconstruct Western imperialism while demonstrating the dangers of Chinese imperialism (or potential for imperialism) and Russian imperialism. This will require scholar-practitioners capable of grappling with grand strategy, full spectrum diplomacy, just power, intersectional development, and theories of decolonization.

Regardless of whether Mackinder was completely right, influence over territory and resources are state necessities, and the Southern Heartland is indispensable for great power competition. The Biden administration’s new Sub-Saharan Africa strategy appears to be cognizant of some of these challenges. However, without U.S. funding, a concerted effort with European and Asian partner nations, and a true partnership with African nations, progress remains unlikely.

Grant W. Turner is currently interning at The Jamestown Foundation while pursuing his second master’s degree, a MA in Statecraft and International Affairs at The Institute of World Politics.