By Reviewed by Paolo Pizzolo and Manfredi Valeriani - 13 December 2017 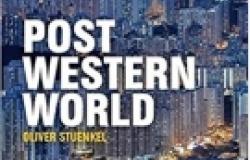 In his book Post-Western World: How Emerging Powers are Remaking Global Order, Oliver Stuenkel introduces some innovative arguments regarding the future of world politics from a quite uncommon perspective for Western mainstream analyses. In line with some of the author’s prior publications, the main claim is that our understanding of the creation of today’s international order is limited, since it depicts a post-Western world from a narrow-minded Western-centric standpoint. In this context, non-Western actors are barely perceived as constructive rule-makers and institution-builders, because the West is widely conceived as the sole actor entitled to shape the norms by which the international system is disciplined. However, Stuenkel suggests that the study of the future world order needs to bear the inevitability of a bipolarization between the United States and China or even of a multipolarization due to the emergence of the BRICS countries. According to the author, the end of the unipolar world requires an overarching international analysis that overcomes the traditional Western-centric perspective and a more balanced understanding of the distribution of global power.

The chief aim of Stuenkel’s book is to show that on the one hand most observers – both Western and anti-Western – tend to overestimate the role the West played in the past and, on the other hand, to discuss how to better adapt to a multipolar world order. The book is a sophisticated analysis of today’s world order and its future development. The author successfully mixes good theoretical bases with an in-depth knowledge of the latest initiatives from “the rest” that are coming up in addition to pre-existing Western institutions. The author shows a full understanding of the ongoing dynamics in the countries that he takes into consideration, listing the limits and the challenges that these “new” actors have been facing.

The book is organized into six chapters. The first chapter considers the origins of Western-centrism from a historical outlook. Specifically, it describes the nature of global order prior to the rise of the West, claiming that an international order was already in place at that time; it analyzes how Europe began to advance and rapidly overcome other actors starting from the 16th century, ultimately dominating the world four centuries later; and it evaluates how Europeans – and Westerners in general – believe that Westernization and modernization are synonyms.

The second chapter deals with the rise of the rest and with the likely collapse of the unipolar system. The principal statement here is that in the coming decades the world will face a condition of “asymmetric bipolarity” in which the United States will keep their leading position in terms of military power, whereas China will have the world’s leading economy. Nevertheless, the author raises the question of whether this kind of bipolar system will be peaceful, durable and stable, while rejecting a priori the idea – often shared in the West – that the imminent post-unipolar world will be necessarily chaotic and unstable.

The third chapter examines soft power. After highlighting that soft power uses attraction and persuasion rather than force and coercion in foreign policy, and that its allure relies on a country’s culture, political ideals and policies, the author states that emerging powers are seeking to transform hard power into soft power, particularly in three key areas: cultural diplomacy, international legitimacy/agenda-setting capacity, and the attractiveness of each society. Soft power is recognized as being one of the most efficient tools in the hands of the emerging powers. However, Stuenkel has a pragmatic approach and he does not fail in understanding that these actors are still far from having the same strength as the West in specific areas such as international agenda setting and their domestic media’s international influence.

The fourth and fifth chapters illustrate the main international initiatives and institutions proposed by non-Western countries – particularly China – aimed at crafting a parallel global order. These institutions and international regimes are divided into several sectors: finance, trade and investment, security, diplomacy, and infrastructure. The institutions analyzed are various and diversified, from the China initiated Asian Infrastructure Investment Bank (AIIB) to the Shanghai Cooperation Organization (SCO), passing by the New Development Bank (NDB), ASEAN and many more.
Finally, the sixth chapter draws some conclusions on the coming post-Western world. A key thesis by the author is that non-Western actors do not seek to undermine Western institutions and create a new world order, but rather they wish to forge parallel institutions that emulate Western leadership. Moreover, emerging powers do not question the foundations of Western liberal order, and agree with issues such as international institutions, cooperative security, democratic community, collective problem solving, shared sovereignty, and the rule of law: in fact, all of these elements are necessary for rising powers to develop economically.

In short, the key arguments of the book are the following. First, a Western-centric worldview leads to underestimating the role that non-Western actors played in the past and play in contemporary international politics, but also the constructive role that they are likely to play in the future. The book argues that a post-Western order will not necessarily be more violent than today’s global order. Second, the economic rise of the rest, specifically China, will allow it to enhance its military capacity and it will inevitably entail an increase of its international influence and soft power. Third, emerging powers are crafting a parallel international order, with several institutions and international regimes that represent an alternative to Western-led ones. The book argues that, rather than directly confronting existing institutions, rising powers – primarily China – are quietly building a parallel global order that will initially complement today’s international institutions. Finally, the creation of new parallel institutions is the main strategy that non-Western actors use to better exercise their power. This alternative order is already in the making. However its structures do not emerge because China and others support new ideas on how to address global challenges: but rather they create the structures to project their power, emulating what the West has already done before. The book claims that, as part of their strategy, China-led emerging powers will continue to invest in existing institutions and embrace most elements of today’s “liberal hierarchical order”: but they will seek to obtain the “hegemonic principles” only enjoyed by the United States so far.

In conclusion, Oliver Stuenkel depicts an interesting future scenario by using lenses that see beyond Western-centric rhetoric, in the context of the rise of a post-unipolar – and thus post-Western – global order. Being a Brazilian scholar, therefore a citizen of one of the BRICS, the author provides a very detailed analysis of the main issues that emerging powers will have to deal with that are often misinterpreted in Western academic and intellectual environments. However, the book is not devoid of flaws. Even if the author explains that China is currently the country with the highest chances of challenging the current world order, a deeper focus on other countries could have contributed to make this book a ‘must have’ on many more scholars’ bookshelves. However, the book is still a valuable and appreciable tool to understand the perception that the non-Western world has of itself and of the West, and, particularly, a useful guide for the West to not overestimate itself and underestimate the rest.

Time and space in the study of international organizations: An introduction