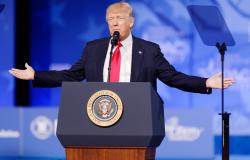 By imposing tariffs on steel and aluminum imports, President Donald Trump is proposing a 19th century strategy in the context of a 21st century global economy. When Republicans, under Abraham Lincoln’s leadership, sought to protect fragile northern industries from the flood of British goods in 1844, he proclaimed, "Give us a protective tariff and we will have the greatest nation on earth.” The risk of using yesteryear’s protectionist approach to shore up today’s nationalist sentiment will only negatively impact the United States’ current state of economic primacy. In reality, these tariffs are unlikely to produce material benefits for the American economy as a whole. And rather, they threaten to undermine America’s closest alliances, sabotage the prospects for a joint effective response to China’s rise, and deliver a serious blow to the already fraying set of multilateral institutions that underpin global economic order. In short: they constitute a self-inflicted wound by the United States.

On the face of it, Trump’s tariffs are indiscriminate, and rather than sending precision economic strikes to any one particular country, he offers lifelines to particular nations as concessions, as in the case of Canada, Mexico, and Australia. The U.S. has also carefully signaled openness to grant European countries exceptions from the tariff if they fulfill certain criteria. Despite then-candidate Donald Trump repeatedly railing against the inequities of China’s economic practices, the countries most likely to take a hit are U.S. allies in East Asia and in Europe. This includes South Korea and Japan both of whom are among the top ten exporters of steel to the U.S. The EU is the other major partner who stands to significantly lose under the proposed measures, with Germany particularly reliant on its rolled-steel exports to the United States.

Europe is already talking countermeasures. They have been preparing for months should the eventual activation of Section 232 by the Trump administration take place. Once the announcement came, the EU reaction to Trump’s announcement was swift and severe – with EU Commission President Jean-Claude Juncker even calling the decision “stupid”. Europe has plenty of leverage as the EU is the world’s largest trading bloc and the number one destination of U.S. exports. Possible targets of EU countermeasures include Levi’s jeans, Harley Davidson motorcycles, bourbon, steel and agricultural products. These could result in higher prices for American consumers, weigh on the U.S. economy and, most importantly for the president, cause layoffs in swing states that could jeopardize his electoral prospects come 2020.

For now, undaunted by the prospect of a trade war, President Trump has doubled down on his policy, threatening European car exports at a rally over the weekend. In a tweet, he insisted that the EU treats the US “very badly” and should “drop their horrific barriers & tariffs on U.S. products”. This inflammatory rhetoric makes de-escalation less likely. And a trade war would damage transatlantic economic ties at a crucial time when economic growth is picking up on both sides of the Atlantic and trade between the US and the EU is increasing. What’s more, average EU tariffs against the U.S. currently sit at only 3 percent and further reducing tariffs, including in the automotive and agricultural sectors, was a key objective of the Transatlantic Trade and Investment Partnership (TTIP) talks launched during Barack Obama but essentially abandoned by Trump. Moreover, Trump has repeatedly expressed criticism of the EU’s trade practices in what is an apparent failure to comprehend the complexity of global supply chains. Today many EU companies have production in the United States employing some 4.3 million American workers in total.

More worryingly, the tariffs threaten the broader transatlantic partnership. They will further undermine European confidence and trust in the United States, and reinforce already negative views about Donald Trump. The decision comes on top of repeated skeptical remarks by Trump about the EU, and especially Germany. Trump’s standing in Germany is at a record-low and it was recently reported that Trump has not spoken with Chancellor Angela Merkel in five months. A row over tariffs will make it considerably harder for Washington and European capitals to cooperate on other key issues or when new crises arises. There is a real risk of spillover to other dimensions of the relationship, notably security. The Trump administration itself has indicated it may tie tariff exemptions to defense spending, and a trade war would give U.S. allies less resources with which to finance their military.

Furthermore, the damage caused to U.S. alliances by the tariffs play into the hands of Beijing. Some analysts have already speculated that the perceived unpredictability of the Trump administration on trade “opens a door for China.” Rather than checking the country’s ambitions, the move will likely increase its confidence and assertiveness on the global stage, allowing Beijing to claim the moral high ground as a supporter of multilateral and open trade. Trump’s own National Security Strategy called for joint U.S.-EU economic approaches on China. They both share similar legitimate concerns about Chinese subsidies and dumping practices. Europe is beginning to take its own steps to scrutinize Chinese economic practices and there should in principle be ample opportunity for fruitful transatlantic coordination towards Beijing. As recently as March 10, 2018, American, EU and Japanese officials agreed to cooperate on addressing unfair Chinese trade practices within the World Trade Organization (WTO) framework. However, the threatened tariffs forces U.S. allies to take their focus away from China.

What’s more, the Trump tariffs undermine the international institutional order which the United States once helped create. The WTO is the global referee of trade policy that underpins a stable multilateral trading system. When Europe recently renewed its own anti-dumping measures against Chinese steel, it ensured that these were in accordance with WTO rules and specifically targeting China. Trump, who has referred to the WTO as “a catastrophe”, is still stalling the appointment of U.S. judges to a WTO dispute settlement body. His decision to invoke a rarely used national security clause to justify the new tariffs will further undermine the multilateral economic system – already challenged by protectionism, state capitalism and by Chinese initiatives such as the Belt and Road Initiative. It may also set a dangerous precedent, allowing other countries eager to protect their own industries to act unilaterally. The EU is also seeking to address the Chinese subsidies and dumping practices in other multilateral fora – such as the OECD’s Global Forum on Steel Excess Capacity. In contrast, Trump has decided to act alone and weaken the rules-based economic system that Washington should be revitalizing.

Regrettably, Trump has chosen to invoke the specter of a trade war with America’s closest allies. While the tariff decision might be popular with some in his domestic base and help the Republican party in the upcoming mid-term primaries, it ultimately does not serve American interests. At a time when European distrust of Trump is already at an all-time high over his negative remarks about NATO, withdrawal from the Paris agreement, and possible pullout of the Iran nuclear deal, the last thing the transatlantic relationship needs now is a new trade dispute.

Those in Washington concerned about these worrisome prospects – which includes many senior members of Trump’s own cabinet and prominent Republican members of Congress – should speak out strongly against Trump’s plans and do their best to dilute them. At the same time, EU leaders should refrain from alarmist rhetoric and respond with a sober yet firm approach. The EU is better off exercising restraint in imposing counter-tariffs, sending clear diplomatic messages to Washington, and working through the official WTO channels to challenge Trump’s decision. Both EU and U.S. leaders should seek to contain the damage from spreading to other areas of transatlantic cooperation. Crucially, multilateral cooperation surrounding the rise of China must not be abandoned.

President Trump may not realize it, but maintaining a strong relationship with allies in Europe and Asia, being a reliable partner, and upholding multilateral institutions like the WTO is the key to upholding U.S. global leadership into the 21st century. Instead, unilaterally imposing a 19th century tariff policy is a sure way to alienate Washington’s closest friends and ensure that other, less democratically-minded, states might become tomorrow’s “greatest nation on earth.”

Erik Brattberg is the Director of the Europe Program and a Fellow at the Carnegie Endowment for International Peace in Washington, DC.