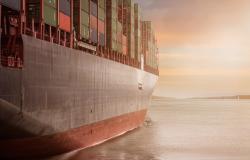 Nicola P. Contessi weighs in on the implications of the Suez Canal logjam.

To everyone’s relief, the Suez blockage found a swift solution after only seven days. The entire backlog was then cleared by April 3. This amounted to 422 vessels for some 26 million ton of goods. Notwithstanding, the ripples will be felt  for a while, aggravating a situation already upended by the epidemic. What we’re looking at is reduced capacity, delayed schedules and extra port congestion that will determine higher freight rates and consumer prices down the line. Pending the findings of the Suez Canal Authority’s (SCA) investigation, we can try to guess the amount of the losses occasioned to the global economy. At a rough estimate of $10 bn/day, the final tally could be in the region of $70 bn.

A handsome amount which laid bare some of the longstanding risks at the bottom of global trade, and raised three big, cascading, questions: Are Suez’ days numbered? Does the logjam mark the end of the megaship? Will it boost reshoring? The answer is probably all of the above and, at the same time, none of the above.

Accidents of the sort have rarely, if ever, been game-changers in and of themselves following an initial period of reflection. All things being different, not even Three Miles Island or Chernobyl triggered a serious rethinking of nuclear power in their age. And, to put matters in perspective, the canal stayed shut for as many as seven years between 1967 and 1975, while a smaller accident already hindered navigation in 2017.

Suez conveys 24% of global containerized and 7% of global oil flows, serving a strategic role in Asia-Europe commerce. Nonetheless, in an age of connectivity, alternative options are increasingly available to that chokepoint, some of which are backed by important geopolitical interests.

One of them is the Cape route, but this is simply too long to make much business sense under normal conditions. Nonetheless, shipping companies periodically use it as a way of pressuring the SCA into cutting canal dues, especially in times of low oil prices. For example, in December 2020, giant oil tankers received a 48% discount as a result of consistent detours to this route.

Another is the Northern Sea Route. The 3,500 miles passage along Russia’s Arctic coast is in its infancy and carried a total of 33mn ton in 2020, compared to the 3mn transiting Suez daily. But the Kremlin plans to turn their Arctic region into a huge SEZ integrated into a transport and industrial corridor to deliver products extracted or manufactured there. Russia’s PR machine is spinning the recent logjam to promote the Arctic route as a more reliable alternative.

While it may be true that the Arctic route combines the capacity of ocean with the speed of rail, those benefits are currently mostly on paper. First, expectations of future year-round navigation aside, it remains a seasonal option; second, it is 30 percent more expensive than Suez, though Russian authorities are mulling discounts on transit rates. At any rate,  MSC, the world’s second largest shipping line, has already reiterated its rejection of  Arctic sea routes in the wake of the blockage–after making an original pledge to that effect in 2019, like CMA CGM and Hapag-Lloyd.

Eurasian rail’s popularity as the ‘faster than sea, cheaper than air’ option has grown in the past decade. A 2020 report of the International Union of Railways projected up to 2 million twenty-foot equivalent units (TEU) could take that route by 2030. This mode has immensely benefitted from both the COVID economy and COVID-related disruptions. Speed, cost and reliability improvements have made some agents and consignors increasingly enthusiastic about it, leading many to see it as a replacement for ocean altogether. The Ever Given may have strengthened rail in the eyes of these and probably a few more. Indeed, a sizable traffic increase was observed following the disturbance. However, though China’s PR machine is likewise running full steam,  trains simply cannot match the volumes of a ship. Moreover, they are not immune to congestion and container shortages. Besides, despite wanting to see rail sustain itself, some of the same interests backing Eurasian rail are also key players in shipping.

Last is the MED-RED Land Bridge. This is a UAE-Israeli joint venture between state-owned Petromal LLC of the UAE, and the two privately-held AF Entrepreneurship and Lubber Line on the Israeli side. The new business uses the bidirectional Eilat-Ashkelon pipeline owned by Israeli state-owned Europe-Asia Pipeline Co. (EAPC) to market Emirati crude to Western consumers and Mediterranean crude to Far Eastern consumers. Though limited to oil, the pipeline is the one alternative that could dent Suez’ standing. Even before the incident, the SCA itself estimated it could divert up to 16% of traffic from the Canal and the SUMED pipeline. The EAPC terminals at both ends of the pipeline are able to accommodate supertankers, which cannot sail through Suez.

The grounding has also shone a light on the hazardous nature of megaships. While these vessels have helped bring down shipping costs thanks to capacities of 15,000 TEU and more, they are harder to maneuver and have a deeper draft than ships of previous generations. The Suez stranding showed that the giantism also applies to the damage these vectors can cause when things go sideways.

An OECD report also highlighted the distributional dilemma associated with the megaship. On one hand, owners and operators enjoy swelling revenues; on the other communities end up footing the costs for dredging and quay extensions in port cities.

However, supply chains depend on that type of vector, and shipping multinationals and alliances have gained remarkable leverage. State institutions have proven unable or reluctant to regulate the giantism in the face of these vested interests, which would require concerted action. A new class of 24,000 TEU vessels is already ready to set sail.

Furthermore, the incident reminded us of how susceptible globally dispersed supply chains are to disruption. Not that this was news: the 2009 financial crisis and especially COVID-19 had already exposed the type of rainy-day vulnerabilities nations can experience as a result of delocalization. Emerging geopolitical and regulatory realities favoring the decoupling between China and the West and political and economic regionalization added fuel, and so could new consumer habits and technological givens like industry 4.0 and tridimensional printing.

Firms with offshore productions have proven resistant to reshoring and to altering long supply chains, but the surge in freight rates could lead manufacturers to reconsider industrial models. Whether Suez will make a difference is uncertain. However, the recent Executive Order on America’s Supply Chains and the Biden Administration’s commitment to enhance BuyUSA policies may have greater impact. The EU has been moving slower and options have only begun being studied.

Although the Suez blockage raised critical issues at the heart of the global economy, freak events will always loom regardless of the mode of transport or the organizational model. The swift resolution of the resulting standstill contained demand for a replacement.

Yet, emerging and ongoing global trends were already questioning some of the old ways of doing business. Whereas these may eventually give way to new corporate models, current service expectations, commodities and market geographies continue to favor Suez or the Med for the time being. What the latest incident did underscore is the importance of risk management with including supplier, modal and possibly route diversification.

Nicola P. Contessi, PhD is an international affairs specialist with expertise in global governance, foreign and security policy, and international transport, and a Research Associate of the York Centre for Asian Research. He can be watched @nicontessi