Book Review - Corruption: What Everyone Needs to Know 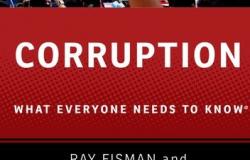 From the fall of a South Korean President to the spark that unleashed the Arab Uprisings, from grand corruption to petty bribery, cases and accusations of corruption permeate politics and can have global repercussions. In Corruption: What Everyone Needs to Know, authors Ray Fisman and Miriam A. Golden approach the topic with the analytical toolkits of economics and political science ‘to provide the reader with an overview of existing knowledge on political corruption (…) to better understand where, why, and how corruption occurs’ (p. 1). To do this, they conceptualise corruption as the outcome of interactions between rational agents pursuing their own interest – to the detriment of society as a whole that suffers from lower economic growth, higher inequality and other negative consequences (1). In some contexts, high levels of corruption have become an equilibrium of mutual expectations: once the majority is expected to be corrupt, it is rational to engage in corrupt behaviour lest one disadvantages oneself by not engaging. A business may not get a contract, say, or a citizen may wait longer for a medical treatment if they do not bribe officials.

The argument of the book is usefully guided by questions, in the titles of chapters as well as headings within, and each chapter ends with a summary of its key points in bullet points. After an introduction to the theoretical approach and summary of the argument in the introduction, the second chapter (‘What is Corruption’?) provides useful conceptual background to the phenomenon, including discussion of and distinguishing it from related phenomena such as clientelism, patronage, and lobbying. Chapters 3 to 7 examine the causal relationships between corruption and other factors such as the level of prosperity, types of political institutions, and culture. This renders some interesting results, some of which go against received wisdom. For instance, Fisman and Golden find that neither particular religions and ethnicities nor electoral accountability are directly related to levels of corruption. In contrast, there is a clearer link between corruption and the prosperity and heterogeneity of countries: wealthier societies tend to be less corrupt, while those with high levels of fractionalisation are more likely to suffer from corruption than homogenous ones.

So what is to be done? The last two chapters (8 and 9) are devoted to ideas on how to tackle corruption. Moving from an equilibrium of high corruption to one of low corruption is above all a problem of information and coordination. Citizens may be unaware of their elected official’s illicit behaviour, or in their individual cost-benefit calculation, engaging in corrupt behaviour or electing corrupt officials is a rational choice based on the expectation that others also engage in it and that the associated risk is low. On a systemic level, therefore, there is a need for transparency and a change of expectations to increase the risks and therefore costs of corrupt behaviour. Well-informed voters could coordinate to replace corrupt politicians with non-corrupt ones, or a fiercely independent prosecutor can generate a shock to the system. In this sense, the book also highlights the importance of the independent institutions that may not be part of the political system of liberal democracies per se, but – as the book shows – are crucial to their proper functioning, such as public broadcasters and independent auditors. Yet these are not well-established everywhere and in high-corruption environments even dedicated Anti-Corruption Commissions cannot be isolated from their political context. One of the many instructive empirical examples the authors discuss throughout the book is that of the International Commission against Impunity in Guatemala, an anti-corruption investigator whose success was not least due to it being entirely external to the domestic political system: it was created by the United Nations. However, it seems unlikely many countries would accept similar intrusions of national sovereignty.

As Sarah Chayes remarked recently, analysts of corruption often see the latter as a disease or malfunction of an otherwise healthy system. This view overlooks the extent to which contemporary corruption is the “effective functioning of systems designed to enrich the powerful” (Chayes), operating in networks that are parasitic to the proper functioning of institutions. By portraying corruption largely as the outcome of the uncoordinated behavioural patterns of individuals, settled in a disadvantageous equilibrium, Fisman and Golden are somewhat guilty of underestimating the purposefulness that is sometimes behind corruption’s persistence. That does not however cloud the excellent contribution this book makes.

Corruption: What Everyone Needs to Know is faithful to its title. The authors provide an accessible but solid introduction to the issue that combines insights from the literature with numerous empirical examples from a wide range of countries that illustrate their argument. This way, the book can serve as a valuable resource for policy-makers as well as the syllabi of modules in political science and development economics.

Fabian Stroetges is a PhD candidate at the School of Government and International Affairs, Durham University. His doctoral research focuses on Tunisia's political transition following the Arab uprisings.

(1) As the authors describe in chapter 4, corruption was argued to have benefits – to ‘oil the wheels of business’ and help getting business done in highly regulated economies – for some time, but today scholars largely eschew this view in light of research that shows corruption’s detrimental impact on societies.

Backcasting from a Future Health Dystopia: 3 Ways to Prevent It