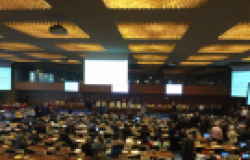 In March 2016, the Global Leadership Initiative at the University of Sheffield, led by Professor Jason Heyes and Dr. Thomas Hastings led a team of social scientists acting as a policy analysts, analysing discussions and policy proposals at the 326th Governing Body of the International Labour Organisation. The ILO, a special branch of the United Nations, seeks to promote labour rights around the world and is the only branch of the UN with a tripartite system – meaning that not only governments, but workers and employers are represented in the debates and voting.

During our visit to Geneva, we had the opportunity to attend a workshop on the ILO and indigenous people – one of a series of events organised by the Interns Association to mark Diversity Month. Martin Oelz, a specialist on equality and non-discrimination, gave us a unique insight into the organisation’s important work towards the protection and empowerment of this marginalised group.

Comprising just 5% of the world’s population, but 15% of its poor, indigenous people everywhere face cycles of poverty and discrimination. The traditional ways of life and the land upon which these people depend, earn very little respect globally. Colonialism, coupled with new forms of enclosure of indigenous people’s territories and resources, have seen indigenous groups enter modern labour markets as a survival strategy.

The ILO has long been committed to achieving fair and dignified lives for indigenous people. In 1957, it developed the first international instrument aimed at recognizing and protecting their rights. In 1989, revisions to this produced the Indigenous and Tribal Peoples Convention (C169), which set standards for governments regarding said rights. Collective land rights are crucial to indigenous people maintaining their cultures, identities and traditional livelihoods; such as hunting, gathering, fishing and shifting cultivation. Ratification of C169 legally binds governments to consult indigenous people on decisions that affect their ancestral lands – an important step towards achieving social and environmental justice.

A mere 22 countries have ratified C169 since its creation nearly 30 years ago. Countries fear a loss of competitive edge in the global economy if they concede indigenous workers’ rights. As a result, some demand that every country concedes them, while others simply deny the existence of their indigenous populations. During the workshop, Mr Oelz explained that while the ILO does campaign for ratification, it focuses upon working with those countries that show political will to engage – helping them to prepare to reform their institutions and legislative frameworks so that upon ratification, C169 becomes operational and purposeful.

The ILO undertakes numerous activities in its efforts to promote decent work for indigenous people. For example, it conducts research to improve gaps in data on the situation of indigenous people in work. This evidence is necessary to drive policy dialogue. Capitalising on growing engagement on the topic by employers and workers groups, the ILO is working to build capacity of its constituents to implement better C169 and to improve social dialogue. Further, ILO field officers work to ensure meaningful participation of indigenous people in wide-ranging projects on the ground.

Though commendable, these steps mark slow progress and are unlikely to bring about radical change in the status of indigenous people in a timely manner. Recent institutional reforms within the ILO have seen gender go from a side issue, to a cross-cutting theme across all branches (gender mainstreaming). Every policy and programme should be assessed for its impact on women and girls and should be designed to create equity for them. This is widely understood to be crucial to achieving gender equality. Indigenous people remain a side issue at the ILO, though there is recognition that mainstreaming their concerns would increase the speed at which their rights are realised. The organisation should seize opportunities to develop a more integrated approach.

There is a clear and urgent need for more concrete action across the globe to achieve social justice for indigenous people – 22 ratifications of C169 out of approximately 90 countries where indigenous people are found, is not good enough. Whilst the ILO is doing great work, it faces huge challenges from dominant actors set upon maintaining the status quo. Extending its mainstreaming approach to the field of indigenous people could be pivotal in making inclusive and sustainable development a reality, and thereby making significant strides to ensuring that the SDGs stay true to their commitment to ‘Leave No One Behind’.

Mitali Sen – MSc Environmental Change and International Development 2014-2016. With thanks to Mr Martin Oelz for his generosity with his time and knowledge, and to Ms Sian Parkinson for inviting us to attend the workshop. This post first appeared on the GLOSS blog.