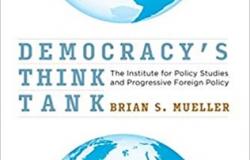 The story of the Institute for Policy Studies (IPS) began at a high-powered State Department meeting of generals and defence industry executives in 1961, at the height of the Cold War. In the room were White House staffer Marcus Raskin and State Department lawyer Richard Barnet, who had joined the Kennedy Administration with, according to the IPS webpage, ‘hopes of systemic transformation’. However, after hearing the speeches and rhetoric of the officials that day:

‘…the two young public servants concluded that systemic change can only happen through the power [of] social movements. Within two years, Raskin and Barnet had left the Kennedy Administration and founded the IPS, where they could more freely “speak truth to power.”’ 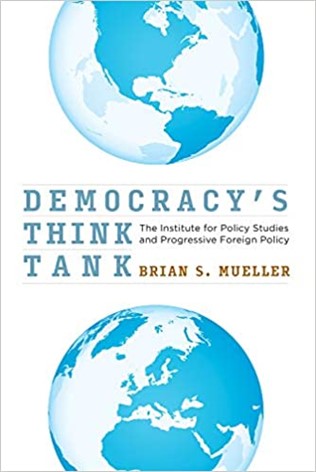 Brian Mueller’s impressive book, Democracy’s Think Tank: The Institute for Policy Studies and Progressive Foreign Policy (2021), explores this story in depth and, in doing so, significantly enriches our understanding of US foreign policy in the Cold War era and beyond. As Mueller demonstrates, the IPS played a unique role as a ‘radical’ outpost for progressive criticism of both mainstream Democratic and Republican thinking throughout the Cold War and has served as a home for those disillusioned by contemporary politics since. Indeed, journalist I.F. Stone called the IPS ‘the institute for the rest of us’ (p.6) to distinguish it from other think tanks such as the RAND Corporation and the Brookings Institution. By detailing the IPS's involvement in a broad range of grassroots campaigns aimed at ending the Cold War and increasing participatory democracy in the US and across the globe, Mueller takes the reader on a journey through several critical junctures in foreign affairs, from Vietnam to the nuclear freeze movement and beyond.

The IPS’s understanding of democracy during the Cold War is the central focus of the book. Mueller uses the IPS as a lens to explore the role of intellectuals, whom he labels ‘peace intellectuals’, in challenging Cold War liberalism and the bipartisan foreign policy consensus that dictated much of the era. The IPS took issue with how mainstream politicians, particularly ‘Cold War liberals’, claimed that their policies promoted and protected democracy both at home and abroad, believing that those who fuelled the Cold War had ‘too readily accepted sacrificing democracy on the altar of global supremacy’ (p.3).

As Mueller shows, to counter Cold War liberalism and develop a blueprint for a post-Cold War era, the IPS sought to embed the principle of participatory democracy within the machinery of the state by fostering a reawakened citizenry to actively engage in decision making processes. Hoping to revive John Dewey’s concept of the ‘public’, intellectuals at the IPS considered that they had a duty to educate citizens by bolstering their ability to engage with the leviathan of government through transparent knowledge sharing. As Mueller explains, at the heart of the IPS was the belief that ‘a genuine democracy required an informed citizenry to help formulate and choose real rather than pseudo-alternatives’ (p.2). The IPS also wanted to make the world safe for diversity by encouraging ideological pluralism, which entailed allowing foreign nations the freedom to choose their own political and economic systems rather than forcing them to accept liberal democratic capitalism. In his opening chapters, Mueller outlines how these tenets framed the IPS mission, both at home and abroad.

With these parameters established, Mueller then utilises chapter 3 to explore the IPS’s involvement in the anti-Vietnam War movement. Despite the impact of IPS work linking the draft to militarism and denouncing the war from legal and moral angles in ‘A Call to Resist Illegitimate Authority’ (1967), Vietnam demonstrated to the IPS just how rigid the Cold War prism was. With President Eisenhower’s domino theory continuing to stymie any official route to ideological pluralism across the globe, the IPS turned its ire towards the unelected bureaucrats perpetuating the conflict, whom they labelled ‘national security managers.’ As Mueller details in chapter 4, for the IPS the ‘enemies’ of democracy included these shadowy, faceless bureaucrats who gave lifeblood to a ‘national security state’ designed for perpetual wartime organising. Here, we learn how the IPS wanted to bring the Nuremberg trials to the US and offered a legal blueprint to hold these national security managers accountable.

In 1976, the IPS’s destiny became irrevocably linked with the international human rights movement when agents of the Chilean dictator Augusto Pinochet assassinated two IPS members in a car bomb attack on Washington's Embassy Row. Mueller opens Democracy’s Think Tank with this incident and employs chapter 5 to expand and explore it in more detail, demonstrating how the Cold War prism warped the US approach to human rights and globalisation, and fuelled the propping up of dictators to maintain an East-West axis. Here, there is insightful analysis of the IPS’s intellectual battle with President Jimmy Carter, who had proposed a post-Cold War framework driven by human rights concerns but whose approach to foreign policy, according to the IPS, was dictated by the same anti-communist folly of his predecessors.

Furthermore, Mueller also demonstrates how the IPS took aim at the institutions that sustained the liberal capitalist order and sought to dismantle the military-industrial complex that dictated geopolitical relations, opposing, for example, NATO and the IMF, which the IPS argued precluded ‘the people’ in the various countries from choosing their own path forward. The concluding chapter shifts the gaze to examine the role of ‘the people’ in their attempts to abolish nuclear weapons through grassroots protest and transnational activism. By operating at the nexus of research, advocacy, and grassroots activism, we see how the IPS sought to provide ‘the people’ with the ammunition needed to confront the political establishment and transform ideas into action.

Across each of these chapters, Mueller outlines how the IPS played a significant role in offering alternate paths towards a more democratic global order. But this is all against the backdrop of a resurgent conservatism in the domestic realm. Indeed, at the same time as the IPS was calling for ideological pluralism across the globe and challenging the ‘myths’ of the Soviet threat at home, Soviet actions were fuelling the rise of a hard-line, hawkish wing in the Republican Party. Cold War flashpoints in Africa, such as the Ogaden crisis, and the Soviet invasion of Afghanistan in the late 1970s provided the gasoline to help propel Ronald Reagan to the White House for example, setting the tone for a significant escalation of tensions in the early 1980s. Here, Mueller highlights how the IPS was often wrongly branded a bastion for Soviet apologists, given that its doctrine determined that US actions contributed far more to destabilising the global order than Soviet activities. According to Mueller though, laying the blame for the US-Soviet rivalry at the door of the US ‘allowed IPS intellectuals to retain the belief that the institute could end the Cold War by speaking truth to power’ (p.179), which, as noted above, was their entire raison d'être.

This book offers a thought-provoking look at a radical outpost in the Washington policy universe. While it is true that conservatives in the latter half of the Twentieth Century proved particularly adept at institution building, Democracy’s Think Tank showcases the power of a less well-known progressive think tank fighting to remake the world. Indeed, as Mueller shows, at the same time as the US established itself as a superpower, the IPS sought to move it away from a militarized economy by developing a global order that restored ‘power’ to the people and allowed democracy to flourish unimpeded. While the IPS ultimately failed to shape US foreign policy, their ideas still mattered. As Mueller notes in closing: The IPS’s ‘unrealized experiments are just as relevant today as during the Cold War… contemporary critics of American empire would benefit from looking at the blueprints designed at democracy’s think tank’ (p.226).

Dr. Joe J. Ryan-Hume is a John W. Kluge fellow at the Library of Congress and a Senior Clerk at the Scottish Parliament.