Book Review - We Crossed a Bridge and It Trembled: Voices from Syria 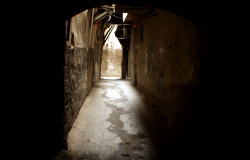 The war in Syria started over seven years ago and has led to half a million deaths and over half the population being displaced. According to the UN Office for the Coordination of Humanitarian Affairs, the war has caused 6.1 million internally displaced people and 4.8 million seeking refuge abroad, and more than 117,000 have been detained or disappeared since 2011. By 2018, more than 13 million people are in need of humanitarian aid. With these extravagant numbers, individual experiences are often lost in the fog of war. We Crossed a Bridge and It Trembled is a remarkable collection of testimonies from Syrian refugees offering a narrative of the Syrian conflict from the perspective of ordinary Syrians who made the events, suffered the consequences, paid an immense personal cost, and were stripped of any dreams they might have had.

Wendy Pearlman tells the story of the conflict entirely through the mouths of Syrians. She conducted hundreds of interviews with Syrians from all social backgrounds, different ethnic minorities, and sects. In the introduction, Pearlman explains her methods of collecting and compiling these narratives. She searched for Syrians wherever she could find them, gained their trust, and listened to their stories. She followed the refugee trail to interview Syrian refugees in Jordan, Turkey, Lebanon, Germany, Sweden and Denmark. Pearlman listened sympathetically and edited those narratives carefully to produce masterful testimonies that tell the history of Syria by Syrians: starting with Syria under the rule of Hafiz al-Assad, the emotional uprisings in 2011 with their euphoria and despair, the war with its horrors, and the subsequent escape from Syria and the challenges of living abroad.

The book sheds necessary light and confounds misapprehensions about many issues pertaining to the study of Syrian politics, and Middle East politics more broadly. First, the narratives in the book question the misunderstanding of authoritarian stability under the Ba’athist regime before 2011. Scholars and policy-analysts have often described authoritarian stability as an entrenched reality in the region. Yet, stories in this book provide a lively image of the pervasive fear that Bashar al-Assad and his father instilled in Syrians. Syrians were not allowed to pray in public or show their religious practices. Otherwise, they were considered extremists. Syrians were not allowed to gather in public for whatever reason, as this gathering was considered a threat to the regime. All the interviewees describe an all-pervasive sense of being monitored, unable to trust their family members, as anyone could be suspected to be a state agent. The narratives show that the Ba’athist regime survived through state terror, mass arrests, torture, and executions, which are described in detail in the book. As Western actors stopped demanding Assad’s departure as part of the war’s endgame, these testimonies are crucial as they show that Assad’s rule over Syria is a very high price to pay for a mistaken stability. Reports of areas recaptured by the Syrian armies already indicate a return to that republic of fear, along with mass arrests and disappearances. A return to the Ba’ath regime rule over Syria only means a return to this facade of stability built on terror and distrust.

Second, the book presents new perspectives to the scholarly understanding of how international actors affect civil wars. Although most scholars often focus on the role of international powers in funding the war, the narratives in the book show that the effect of international actors on the war also lies at the individual level. Several interviewees narrated how they were encouraged to participate in the uprisings as they believed that Western powers, claiming to promote democracy in the Middle East, would support their cause. As international actors failed to support the revolution in Syria, Syrians felt betrayed. The hope and disappointment that accompanied the international role in the Syria conflict reflect the individual perception of international actors. Ashraf, an interviewee from Qamishli succinctly describes the deception: ‘The problem is not that the world did nothing. It’s that they told us, “Rise up! We are with you. Revolt!” [Turkish president, Recep Tayyip] Erdoğan declared that the bombing of Homs was a red line, and President Obama said that chemical weapons were a red line ... And when the regime crossed these lines and there was no implementation of these threats, the population was left in a state of desperation’ (p.198). For decades, public opinion polls have continuously indicated the poor image of the United States and Western powers in the Middle East without comprehensive explanations. The narratives in the book provide invaluable data to understand this phenomenon.

Third, sectarianism has been one of the main issues that emerged in the course of the war in Syria. Some scholars have even attributed the whole war to sectarian divides between Sunni and Shiite communities. The book provides uncontroversial evidence that the al-Assad regime was the primary driver of sectarian violence. Several interviewees confirm that these sectarian markers never mattered before 2011. The regime activated these sectarian differences to mobilise support and justify the excessive violence. Aziza, a school principal from Hama, narrated: ‘In Rastan, a town in the Homs countryside, most residents are religious Sunni Muslims. My husband went there to express condolences after a lot of people were killed. He told them “They want to split us along religious lines. But religion is for God and the nation is for all.” The people of Rastan repeated after him, “Religion is for God and the nation is for all!” The more people tried to address the issue of sectarianism, the more violent the regime became’ (p.194).

Finally, the book sheds light on one of the most discussed and debated topics in European politics, that is religious radicalisation. The book presents invaluable material to trace how individuals go through processes of religious radicalisation as a result of war, despair, and suffering. One of the voices in the book belongs to Adam, a media organiser from Latakia who, among other speakers, shows that extremism is the last resort of the hopeless. ‘What’s crucial in this whole process is that you don’t matter. You as an individual – your aspirations, your ideas about what is right – mean absolutely nothing. And that’s when you understand why people get radicalised. I completely understand why somebody would join ISIS or al-Qaeda or the Assad regime or the Kurdish groups. You are in dire need for a narrative that can justify this futility … This suffering has to be for a reason. Otherwise, it's too painful' (pp. 330-331).

However it is important to note that the book is entirely based on anti-Assad narratives. Therefore, it does not provide a full picture of the conflict and it should be read alongside other literature. The voices of Assad supporters, as well as religious extremists, and members of foreign proxies, such as Hezbollah, are missing. That being said, this book is a must-read by anyone interested in the Syria conflict, whether they be scholars, policy-makers, practitioners, or general readers. Media analysts, academics, policy-makers, all talk about Syria. The war in Syria is still so badly misunderstood. It is time to listen to Syrians to understand this war, and this is what Wendy Pearlman has done.

Dr May Darwich is Assistant Professor in the International Relations of the Middle East in the School of Government and International Affairs, Durham University.