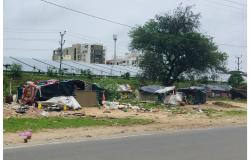 Over a billion people living in poverty and a $500 million per day loss of income for the poorest people in the world could soon be reality.

The COVID-19 pandemic continues to dominate headlines as the death toll rises and economies falter. However, far too little attention is being given to the worsening crisis in developing countries where coronavirus is spreading rapidly and governments grapple with the devastating economic consequences of prolonged shutdowns and the collapse of world trade. Three-quarters of new cases detected every day are in developing countries.

All of this is likely to trigger immediate and — potentially — permanent increases in global poverty, and the situation could get a lot worse unless governments move faster. In fact, it could set back progress on reducing global poverty and achieving SDG 1 by decades — as the The Economist called it, the poverty impact of COVID-19 is likely to become the ‘the great reversal’.

In a new UNU-WIDER paper we take a closer look at those poverty impacts building on our earlier estimates that many millions of people could fall into poverty due to the crisis.

Goal 1 of the UN Sustainable Development Goals aims to end extreme poverty by 2030. The attainment of that goal is looking increasingly challenging due to COVID-19 and the likely increase in the number of people living in poverty as well as the impact of COVID-19 on the existing world’s poor.

Our new poverty estimates confirm our earlier estimates —the COVID-19 crisis could lead to 80-400m new poor living under $1.90 per day and potentially take extreme poverty back over 1 billion people. These numbers represent a reversal of 20–30 years in global poverty reduction (depending on whether one takes absolute or relative counts).

Our research considered a range of impacts based on income or consumption contractions of 5%, 10%, and 20% and found that in addition to the impact on extreme poverty there could be over 500m new poor living under the $3.20 and $5.50 per day poverty lines (see Table 1).

The cost of COVID-19 on the poorest

In addition to increases in the poverty headcount, we find that the intensity and severity of poverty are also likely to be exacerbated too. The daily losses could be in the millions of dollars per day ($2011PPP) among those already living in extreme poverty, and among the group of people newly pushed into extreme poverty as a result of the crisis (see Figure 1).

Figure 1: Income/consumption losses among the new and existing poor under a 5%, 10%, and 20% per capita contraction ($ million a day) In our new paper we also find that the location of global poverty could shift too as a consequence of the crisis.

There could be much more new poverty not only in countries where poverty has remained relatively high over the last three decades but also in countries that are not among the poorest countries anymore. Our country-level poverty estimates that show the location of global poverty is likely to shift towards middle-income countries and South Asia and East Asia.

Extreme poverty could almost double in today’s middle-income countries increasing to 680 million people under the worst-case scenario. While immediately prior to the outbreak of the virus sub-Sahara Africa was home to 60% of the world’s poor; our estimates illustrate a resurgence of poverty elsewhere in the world, in South Asia and in East Asia. In countries such as Bangladesh, India, Indonesia, Pakistan, and the Philippines.

The lesson for progress

These findings expose the extent of precarity in developing countries, but also the fragility of poverty reductions to any economic shock whether it is the current crisis or the next wave of the pandemic.

The results raise questions for how we think about poverty reduction and in particular, the need for new measures of extreme precarity to sit alongside measures of extreme poverty. And the two measures need to be reported together. The extreme poverty measure ($1.90) gave a poverty count of about 700m or 9.9% the world’s population before the crisis. Just above those people sit another 400m people or 5.4% of the world’s population living in extreme precarity, one shock away from poverty whether it is this crisis or the next wave of COVID-19.

Chris Hoy is a Policy Fellow in the Crawford School of Public Policy at the Australian National University.

This first appeared on the UNU-WIDER blog and was reposted with permission. The views expressed in this piece are those of the author(s), and do not necessarily reflect the views of the Institute or the United Nations University, nor the programme/project donors.

Photo by Chris John from Pexels

What did we learn from six months of training senior Aid people in Influencing?