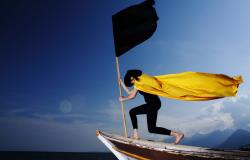 Why not all leaders get a popularity boost in threatening times - and certainly not Joe Biden.

It has been more than hundred days since Russian President Vladimir Putin gave the order to attack Ukraine. Since then, the war has unfolded quite differently than the Kremlin leader imagined. Right now, a merciless offensive is raging in the east, and at best slow gains are being made conquering new terrain. Mass deaths continue – and thousands of Russian soldiers are among the dead.

Despite this, Putin's approval ratings remain very high, according to a poll conducted by the independent Russian polling institute the Levanda Center. After the war of aggression began, Putin's popularity rose from 71 to 83 percent. It has only fallen again by one percentage point in the three months of fighting since then. Support for Ukrainian President Volodymyr Zelenskiy rose even more significantly, according to figures from the independent polling institute Rating Group Ukraine. Approval for his administration tripled since December 2021, reaching 91 percent at the end of February 2022, after the outbreak of war.

Such rapid increases in public support were given a name by political scientists in the 1970s: the "rally-around-the-flag effect". The theory is that people tend to rally together and unite behind their incumbent leadership when they feel threatened by external forces. This effect is not limited to conflicts and wars; it was also seen amid the outbreak of the Corona pandemic: The poll ratings of French President Emmanuel Macron, Italian Prime Minister Giuseppe Conte, Dutch Prime Minister Mark Rutte, and British Prime Minister Boris Johnson all rose significantly during the weeks of the first Corona wave.

The human trend to unite in the face of external pressure has benefited a broad range of leaders. The Bertelsmann Stiftung's Sustainable Governance Indicators (SGI) special study on COVID-19 crisis management in 29 industrialized countries notes: "Particularly at the beginning of the pandemic, we observed a high degree of cooperation between various political actors in many countries – including those featuring a highly polarized party landscape – that was manifest in short-term support for the government’s course of action in a ‘rally around the flag’ effect."

Not everyone benefits from crisis

One question that has been puzzling scholars since the discovery of the rally-around-the-flag effect is: Why does support for many heads of state and government increase in threatening times - but not for all of them? Why, after the outbreak of war, did Viktor Orban win the elections in Hungary by a much larger margin than the polls had predicted, while Emmanuel Macron had to fear for his re-election and the right-wing populist Slovenian Prime Minister Janez Janša was even voted out of office? And why, despite immediate, forceful action and clear language against Russian aggression, did U.S. President Joe Biden fail to see an uptick in his poll numbers? Why, of all things, is the hour of rallying around the flag not materializing for him in the all-important year of the mid-term elections?

One reason could lie in the perceived distance from the source of the threat: The war in Ukraine is too far away for most Americans to feel directly threatened, and as with many Central and Western Europeans, it does not pose an immediate threat of war as long as NATO does not intervene in the fighting or supply long-range weapons to Ukraine. Fear of corona had a stronger effect on many people, because the danger lurked in local neighborhoods. This ultimately meant that even Donald Trump was briefly able to enjoy rising approval ratings despite his contradictory and chaotic crisis management.

My second attempt at an explanation also relates to the corona experience: In many countries, approval of the crisis policy of the heads of state and government receded rapidly, after just a short time. According to the SGI special study, this was particularly evident in countries that "failure to bridge partisan divides".

The U.S. is a deeply divided nation, and opinions differ starkly on its country's foreign policy role. Trump won the 2016 election in part by promising that the U.S. would no longer serve as a police force for the world. Under his presidency, military intervention in other countries would only take place if national interests were at stake. Democrats also pursued the idea of withdrawal in light of the many unsuccessful wars. But while Democrats were concerned about upholding the liberal world order and supporting democratic transformations, Trump unscrupulously embraced autocrats and dictators if a good deal could be struck.

A knee-jerk rejection against Biden

When it comes to the Russian invasion, both Democrats and Republicans appear at first glance to be more united than they have been in a long time. A recent University of Maryland poll shows that a majority of both Republicans and Democrats see the Russian invasion of Ukraine as primarily a "blatant violation of sovereignty and international law." In assessing U.S. government responses to Russian aggression, however, there were notable differences among Republicans surveyed depending on whether they had been asked to assess "U.S. government action" or "Biden administration action."

For example, 61 percent of Republicans surveyed supported an early warning of the international community of Russia's plans when it was presented to them as a U.S. government response, but only 28 percent supported it when it was presented as having been initiated by the Biden administration. Thus, the mere mention of Biden's name caused a swift change of heart about measures that a majority of Republicans actually support.

Another poll conducted by the University of Maryland in March is also revealing: When asked to choose which statesman they disliked the most, most Republicans named Joe Biden first, followed by Vladimir Putin in second place. If, among large parts of the population, hatred of one’s own president is greater than horror at the Russian aggressor who tramples on international law, then the possibility of rallying around the flag remains a pipedream.

Karola Klatt is a science journalist and editor of SGI News and the Bertelsmann Stiftung's BTI blog.