Beyond the Military Domain: A Potential Role for the Quad in South Asia 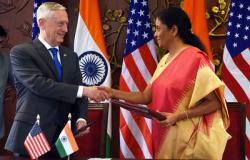 As China continues to deepen its influence in South Asia, the Quadrilateral Security Dialogue (Quad) must recalibrate its policy orientation beyond the military realm. Moreover, India should accommodate and collaborate with its like-minded partners to maintain the status quo in the region and to ensure a rules-based order. What must be taken into consideration is that the strategy to stand-up to China’s influence must go beyond the military realm. The Quad – a multilateral arrangement between the United States, India, Japan, and Australia – has the potential to apply an economic model that effectively addresses the root cause of China’s influence and provides the smaller states of the region with a more transparent, secure, and legitimate alternative for development.

India has constantly strived to maintain its role as a regional power in South Asia; however, fault lines have appeared due to China’s increasing influence. Despite Beijing’s persistence on only having benign intentions, a closer look illustrates that it is primarily pursuing its power projection interests in addition to wanting to alter the order of the region.

These actions of China often come at the expense of India to constrain its diplomatic, political, and economic capabilities. China is dissatisfied at the Line of Actual Control (LAC) with India and is trying to improve the situation unilaterally. Beijing is also frustrated with New Delhi’s persistent support of the Dalai Lama and its rejection of the Belt and Road Initiative (BRI) due to issues of transparency. As a result, China seeks to undermine India’s interests by trying to alter the architecture of the region to its favour. Before discussing the way forward for the Quad, it is important to first address the root of China’s influence.

The Root of China’s Influence

Military strength can be used as a formidable deterrent against the Chinese armed forces; however, it is not enough to significantly address its growing influence in South Asia. It must be remembered that China’s major engagements with states in the region are rooted not in military arrangements but through its BRI which encompasses mega infrastructure and connectivity projects. In 2014-15, President Xi Jinping visited key regional states and stressed on developing a creative cooperation model with joint building and regional large-scale cooperation.

As far as intentions go, China has both geopolitical and geo-economic motivations behind the BRI. President Xi Jinping has promoted a vision of a more assertive China and experts see the initiative as one of the main pillars of a more blunt Chinese statecraft under President Xi, alongside the Made in China 2025 economic development strategy. According to  Elizabeth C. Economy, ‘Under Xi, China now actively seeks to shape international norms and institutions and forcefully asserts its presence on the global stage.’ It is therefore important to look beyond the military realm for the Quad to effectively maximize power vis-à-vis China’s increasing influence in the region.

The Quad: Maximizing Power beyond the Military

According to the index, both the United States and China are super powers while Japan and India fall in third and fourth place respectively as major powers and Australia comes in the category of a high-ranking middle power. Considering that all four members are well positioned to take on China, a change in strategy is all that is needed. It is no question that the Quad is superior to China in terms of military capabilities; however, Beijing seems have an advantage in other domains, particularly, the economic and socio-political realms. Though an important dimension, the military domain does not seem to effectively address China’s rapidly growing influence.

Though it seems like a simple formula, the effects will be significant. Beijing’s influence comes against the backdrop of its economic engagements with most of the states in South Asia.  Quad members may incorporate an economic model to match and possibly outmaneuver China’s BRI.

In theory, the recalibration of the Quad’s policy orientation may be a sound argument; however, the challenges lie in practice. The primary obstacle lies in restructuring the members’ domestic and bureaucratic policies to fit the requirements of such a major undertaking and shift. One important aspect to highlight in this regard is India’s reluctance to invite or accommodate extra-regional powers in its geographic neighborhood. However, if India wants to maintain a truly rules-based order in South Asia, it will have to make and take decisions that may not necessarily reflect its previous policy orientations.

The second challenge lies among the states of South Asia. These states may also be reluctant and wary of security coalitions such as the Quad which may compromise their strategic interests in the region. This is where the recommendation comes in. By deviating from being a solely military-centric group, the Quad may allay the strategic concerns of the South Asian states by providing a more transparent and effective alternative for their development.

A way forward may lie in the Indo-Japanese framework of the Asia-Africa Growth Corridor (AAGC). The AAGC is focused on four priority areas, namely, development projects, quality infrastructure and institutional connectivity, skill development and capacity building, and people-to-people cooperation. The objective of the AAGC is to boost trade, development, and investment in Africa. In addition, the program would expedite infrastructure and connectivity projects to align with the development priorities of Africa and the Sustainable Development Goals. By applying and maximizing this model under the leadership of the Quad members, it may serve as a possible counterweight to the BRI in South Asia.

An AAGC type of model incorporated by the Quad members may serve as a more secure, transparent, and legitimate platform for inter-state development and cooperation. This may also serve as a steppingstone for other South Asian states to join and possibly expand the Quad’s membership under the Quad Plus. By using carrots instead of sticks, the Quad may gain more acceptance among the smaller states of South Asia vis-à-vis China’s deepening engagements with the region.

The time is ripe for Quad members to recalibrate their agenda considering that states now have been seen to be slowly pushing-back Chinese-led mega projects due to lack of transparency coupled with the effects of the COVID-19 pandemic. Moreover, all four members of the Quad are in the perfect position to provide a developmental alternative considering that three of the four members are part of the world’s top 10 economies.

In the words of Robert Kaplan, China’s new empire is irresistible only if the US does not offer an alternative. If all four members of the Quad collectively apply a significant model to challenge the BRI, South Asia may well indeed be able to have a better and more transparent alternative.

Don McLain Gill is an international affairs researcher based in the Philippines. He is currently completing his master’s in International Studies at the University of the Philippines Diliman. He has written extensively on regional geopolitics and Indian foreign policy for various international peer-reviewed journals, book chapters and other publications.