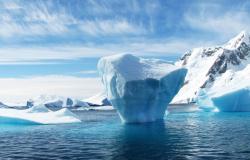 The ice sheets, sea ice and permafrost provide little direct economic benefit to nation states, despite their importance for Arctic indigenous peoples. But they do provide extremely important features that enable the present climate to operate as humankind has grown used to.

Arctic sea ice and permafrost have declined rapidly in the last few decades, and the West Antarctic ice sheet is close to (or beyond) the point of widespread, inevitable, collapse.

The timescale of these losses raises questions about whether they can be addressed in the typical 30-year timeframes of political consensus-building. Yet the consequences of not addressing them are too big to ignore.

Permafrost stores more than twice the present-day atmosphere’s load of carbon. Such a huge reservoir becoming a source of carbon in the coming centuries could dwarf efforts to mitigate anthropogenic emissions and alone would cost trillions this century in climate damage.

In West Antarctica, the unstable parts of the ice sheet have the potential to raise sea level by about 5m over the coming centuries. Such a collapse would be effectively permanent, flooding coastal wetland ecosystems and cities, and forcing migration of over half a billion people.

Targeted interventions vs global geoengineering* to protect the cryosphere

While some of the at-risk parts of the cryosphere (such as Arctic summer sea ice) could potentially be preserved with solar geoengineering approaches that cool the entire planet, other parts cannot be saved by simply lowering the surface temperature.

For example, much of West Antarctica is susceptible to rapid collapse because it stands on bedrock that deepens inland. The floating ice shelves that surround and stabilize the grounded ice sheet have been dramatically thinned in recent years by basal melt caused by the intrusion of warm ocean waters, leading to acceleration and potential destabilization. Preventing this requires reestablishment of the physical buttressing from the rocky outcrops that the thinned ice shelves no longer reach.

The outlet glaciers that are the focal points of the ice sheet instability are 50-100 km wide in Antarctica and less than 10 km wide in Greenland. Since the vast majority of ice raising sea level drains through these narrow passages, interventions at just a few strategic locations have the potential to affect the entire ice sheet catchment without requiring continent-wide infrastructure.

On the other hand, both sea ice management and permafrost re-wilding provides no such “leverage” and would be vastly more expensive than solar geoengineering, but they may have a role in specific local instances.

Perhaps where large carbon releases are likely to occur with modest temperature rises, or because of a significant cultural value, they may also be useful in contexts of ecosystem services by maintaining environments that are highly valued for human or ecological reasons. This is already motivating cloud brightening experiments aimed at preserving the Great Barrier Reef.

Ethics and governance of targeted interventions

The piece-meal approach of targeted interventions has governance advantages over global geoengineering because fewer countries are involved, and existing treaties tend to address specific regions, often emphasizing the importance of the Precautionary Approach, conservation and preserving the status quo.

Since targeted interventions address global problems at their source rather than where they do damage, they are equitable and have more in common with mitigation than adaptation.

The legal framework for interventions is based on environmental impact assessments: for example, demanded by Greenland or The Protocol on Environmental Protection to the Antarctic Treaty (Madrid Protocol).

The Madrid Protocol states that “adverse effects on climate or weather patterns” must be avoided. The objective of conserving the ice sheets would actively seek to maintain those patterns.

Not doing glacier geoengineering, where it would allow a continental-scale ice sheet to collapse, would change the global climate, atmospheric and ocean circulations. Similar changes in the glacial environment should also be avoided, and again this would be better served by preserving the ice sheets than allowing them to collapse.

In the case of Arctic sea ice, all states have guaranteed access to navigation routes, but the Law of the Sea Conventions provides for the construction of artificial structures of limited extent.

Who is primarily involved in governance of the cryosphere?

The governance of both the Antarctic and much of the Arctic Ocean is largely in the hands of the developed and relatively rich countries, and legally they should take prime responsibility, and proactively preserve the cryosphere.

The Arctic permafrost is largely contained within Russia, Canada and the United States (Alaska). Permafrost preservation attempts have been pioneered at the Pleistocene Park in Siberia. Bison and other large herbivores have been introduced to a fenced enclosure that has also been partially denuded of tree cover. In practice the First Nations and the Canadian government would decide together on targeted permafrost geoengineering regulations in Canada.

Alaska permafrost area and carbon storage are much smaller than in Canada and Russia, but the region has been warming rapidly. Thawing permafrost is an infrastructure issue – affecting buildings, food security, and especially the trans-Alaska pipeline carrying oil from the Arctic Ocean across the whole state to Valdez.

What role can the Arctic peoples play?

The Arctic peoples have been long-marginalized and largely removed from decision-making regarding extraction of the large mining and fossil fuel reserves in the Arctic, despite the UN Declaration on the Rights of Indigenous People, which requires ‘free, prior, informed consent’.

Institutions based in and representative of local Arctic people could and should play an important role in empowering and educating the region on the value of the ice sheet and permafrost to the whole planet, in addition to the region itself.

Who should pay for cryosphere conservation?

Costs involved are difficult to quantify now:  we estimate ice sheet conservation might be US$100 billion over a century, which works out to about 1$ per year per person directly affected by rising seas.

A 1 m increase in sea ice thickness over 10% of the Arctic  would cost about $50 billion per year. Permafrost re-wilding could return around 1% per annum on investment  in carbon storage if carbon prices are at as low as $5 per ton, or less depending on carbon tax mechanisms.

Monetizing the natural environment – the Greenland ice sheet, sea ice and permafrost – in the style of Payments for Ecosystem Services (PES) could provide a much more sustainable and equitable source of income than present efforts to extract resources from the Arctic.

The UNFCCC concept of shared but differentiated responsibilities may imply that funding for cryosphere conservation should come from rich nations, and enlightened self-interest would point towards tackling rising sea level and other impacts by conservation rather than defending their own coastlines.

The views of guest post authors are their own. C2G does not necessarily endorse the opinions stated in guest posts. We do, however, encourage a constructive conversation involving multiple viewpoints and voices.