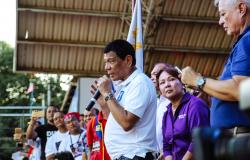 Over the past decades, the Philippines has shifted between the United States and China to advance its interests. But with growing tensions between the two superpowers, I argue that the Philippines has little strategic choice in dealing with Washington and Beijing and runs the risk of triggering a shooting war in the South China Sea which does not serve its interests.

While States around the world are battling to cope with the Covid-19 crisis and its unfolding economic impacts, the United States and China are locked in an intensifying great power rivalry. From trade, to technology, to human rights and democracy in Hong Kong, US-China rivalry has also intensified in the South China Sea (SCS) under Trump’s Administration. The decision to declare for the first time in mid-2020 that Chinese action in the South China Sea is unlawful, sent shock waves across the region and beyond. More recently, China authorized its coast guard to use forces against foreign vessels in the South China Sea.

These new developments are alarming signs of possible military confrontations between the two superpowers with huge security implications for southeast Asian countries, especially the Philippines. It is important to briefly note that since first perceiving the Chinese threat in late 90s, the Philippines has relied on shifting between Washington and Beijing – often playing them against each other – to advance its own security and economic interest in the region. But nowadays, countries in Asia and around the world are increasingly worried about being forced to pick a side as the two superpowers continue to put pressure on them to try to shape or alter their foreign policies in ways that better serve their own interests.

Choosing between two superpowers raises serious concerns and requires long term rational calculation to avoid being caught on the wrong side of history as it was the case during the Cold War. Against this backdrop, which side should the Philippines pick if it is forced to choose or should it continue to shift between the two superpowers as it has done for decades?

The Philippines’ interests and long-term strategy

States are rational actors motivated by self-interested goals. They choose between two rival States by summing up and deliberating on their own economic, strategic, values-based interests and the perceived threats they face. Put another way, when push eventually comes to shove, they align with the superpower that meets their needs and interest. In that regard, the Philippines needs to make a rational calculation by assessing the security threats it faces and by taking into account its own economic and other strategic interests.

In terms of external defence, the Chinese presence and military build-ups in the SCS also ‘poses a threat’ to the Philippines military and its fishermen. On several occasions, China has harassed and detained Filipino fishermen and required the payment of fines. Amidst Chinese assertiveness, the United States also failed to commit to the Philippines’ security during the Scarborough Shoal incident which led to the loss of some Filipino territories to China in 2012. As tension between Beijing and Manila mounted, the Obama administration helped broker a peace deal between the two and reiterated Washington’s policy of refraining from taking sides in territorial disputes. Before the end of Aquino’s tenure, China denied the Filipinos access to waters in their own exclusive economic zone.  Against this security conundrum and other strategic needs, what would the choice of China or United States means for the Philippines?

On the one hand, China is an important trading partner for the Philippines but the bilateral trade deficit is quite huge. At the same time China is among the largest investors in the Philippines. China offers economic incentives in the form of foreign direct investment in areas such as infrastructure which is critical for the success of Duterte administration’s infrastructure development plan. Under Duterte, the Philippines secured $25 billion worth of promised Chinese investment which Beijing failed to fulfil.

Choosing Beijing over Washington means the Philippines must continue to accommodate a more powerful China and share natural resources in its own exclusive economic zone with Beijing. The Philippines would also have to continue to double down on domestic nationalism which Duterte has done since he came to power with some success. But worryingly, choosing Beijing will leave the Philippines with little room for maneuver in terms of energy and military security and leave it at the mercy of Chinese generosity in energy exploration projects.

On the other hand, the United States has a formidable military with global reach and strong deterrence capabilities which could help the Philippines strengthens its security in the SCS. Washington is a military ally on which Manila relied for decades for its external defence. In a trip to Manila in 2019, Secretary Pompeo verbally reconfirmed Washington’s commitment to the Philippines’ security interest. He argued that any armed attack on the latter in the SCS will trigger the Mutual Defence Treaty.

Despite Pompeo’s reassurance, Duterte’s administration remains wary of the Philippines’ vulnerability to China and a possible entrapment or abandonment by Washington which happened once during the Scarborough Shoal incident. Moreover, shifting to Washington would mean the Philippines agrees to Washington’s terms. Washington may well trade its commitment to the Philippines security against advanced access to Filipino military bases. Washington proposed the Enhanced Defence Cooperation Agreement in 2014 to deter China after the Scarborough Shoal incident in 2012. But that agreement allowed further access of US forces to Filipino military bases and did little to improve the Philippines’ security impasse.

Allowing advanced access of the US to its bases, the Philippines may indirectly trigger a security dilemma between Washington and Beijing and indirectly participate in the growing arms race in the Pacific. As a result, it risks being dragged into a war that better serves US interests. In case of war, the Philippines also remains a primary target of the Chinese military in the pacific and stands to lose significant Chinese investments and will also suffer from Chinese economic sanctions as was the case during the Scarborough Shoal incident. A rational choice will require Manila to find ways to shield itself against such risks before shifting to Washington.

The reality of choice

In sum, smaller powers cannot pursue independent foreign policies. More often than not they align with great powers in pursuit of their interest.

In recent months, Duterte has also changed tone and insists on a resolution of the SCS dispute based on international law. This has led some commentators to speculate that Duterte may be “leaning back to the US”. But in reality, he intends to ease domestic frustrations about his ‘soft’ foreign policy approach towards China.

The next Filipino administration will have to rely on a Duterte-style foreign policy approach and carefully manage the US-Philippines-China triangular relations to ensure peace in the region. An assertive behaviour will potentially trigger of a shooting war in the SCS.

Moussa SANGARE is an MA Candidate in International Affairs & Global Governance at the Department of Political Science, Zhejiang University, China.

War on Development in Syria: An Interview with Omar Dahi