Reimagining Medellin as an Innovative and Entrepreneurial City 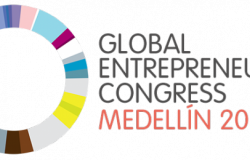 This post reflects on the city hosting the Global Entrepreneurship Congress in 2016, Medellin. This blog is an opinion piece that stems from the opportunity to spend time exploring the entrepreneurial city of Medellin. The transformation of Medellin in becoming an entrepreneurial city has been described as a miracle, but now the next challenge is to see entrepreneurship leveraged as an engine for societal change and development. For previous posts please click here.

In a phenomenally short space of time Medellin has changed its reputation from one of the most dangerous cities in the world to be announced by the Wall Street Journal as ‘Innovative City of the Year’ in 2012. The days of Pablo Escobar and the Medellín Cartel are increasingly part of the city’s cultural history, instead the city has sought to position itself as a South American entrepreneurial hub akin to that of Santiago.

In much the same way that advanced societies have experienced major changes in their approach towards economic development, so cities in emerging economies have come to recognise the opportunities for entrepreneurial led growth. Medellin is a good example of a city that has sought to redefine the forms, functions, and policy mechanisms that comprise its economic strategy, to promote the competitiveness of the city. Essentially Medellin, like many European and North American cities post-war, has come to develop a public narrative premised on innovation and entrepreneurship.

Once renowned as Colombia's industrial heartland and a key centre in the textile industry, Medellin has sought to reposition itself as the entrepreneurial capital of Colombia. Achieving this has been the product of more than the public sector alone, although the Mayor Sergio Fajardo and the City government has been pivotal in bringing together businesses and communities that have seen the creation of highly effective and socially innovative public-private partnerships and networks. As in many other entrepreneurial cities around the world, the success of Medellin is in part due to this pluralization of governance but also the ability to implement and deliver such proposals.

Tim Vorley is Professor of Entrepreneurship at Sheffield University Management School (UK), and his research interests are in the policy and practice of entrepreneurship from an institutional perspective.

What did we learn from six months of training senior Aid people in Influencing?