Book Review: Unbalanced: The Codependency of America and China 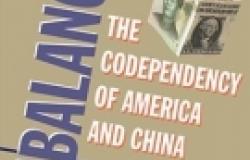 China and the United States stand as the world’s two largest economies and have frequently been envisioned as the G-2. Although in some ways a seemingly preposterous concept amongst other more inclusive multilateral organizations such as the G-7 or G-20, their collective weight warrants consideration of the inner mechanics of this interaction. Given their prominence and the geopolitical impact of Beijing and Washington as well as the former’s rise as an emerging superpower, a deeper understanding of the relationship between these two states offers a unique window into the origins of several of the world’s most pressing challenges.

In this regard, the latest book by Stephen Roach of Yale University and previously Chairman of Morgan Stanley Asia may stand as the most insightful endeavor yet to describe these complicated underlying forces. As a former chief economist of the prominent U.S. bulge-bracket bank, his analysis accordingly focuses emphasis on the subject area of his greatest expertise. His dedicated engagement in and extensive study of these dynamics since the time of Richard Nixon's historic 1972 visit to China makes it a field in which he has over four decades of experience. Coincidentally, economic factors stand as the foundation of this bilateral relationship, making this author exceptionally well placed to examine the complications of today’s quandaries. Per Martin Jacques’s estimation of China’s potential superpower status, “Its military power is puny compared with that of the US…. And its global political influence is still extremely limited. The only sense in which China is a superpower is economic.”

Roach summarizes the problems associated with China and the U.S.’s “uncomfortable embrace” as a mutual obsession with unbalanced growth. He describes the maladjusted relationship that it brought about as follows: “The United States provided something very important: the world’s largest base of external demand that could support China’s export-led production model. China, for its part, offered the United States a broad menu of cheap goods to satisfy its hard-pressed consumers as well as a vast source of foreign capital that could enable it to enjoyed sustained economic growth despite a lack of domestic savings.” (pp.2-3)

Roach convincingly uses the concept of codependency as the framework for his narrative, which Oxford defines as an excessive, “reliance on a partner, typically a partner who requires support due to an illness or addiction.” The distinction in this book is the focus on their relationship in a political economy context, rather than the more traditional psychological one. Although creative in its macro adaptation, the hard facts of Roach’s persuasive argument may fit the concept even better in this more quantitative basis than in the softer structure of emotional personal relationships.

A well-written and engaging read, the storyline moves like a finely-tuned engine with its fully integrated holistic arguments. An example of this integration may be seen in his description of the similarities and differences of Europe’s navigation of the same undercurrents seen in China and the U.S. (pp.31-33)

In the wake of increased economic and geopolitical uncertainty, the stakes in this drama have continued to reach new heights in the months since the book’s release. Roach pointed out last year that “Breaking bad habits is a struggle for any economy, but the United States and China no longer have any choice. While strong on the surface, they suffer similar maladies: They are the most unbalanced major economies in the world today …. No unbalanced economy is ultimately sustainable.” (p.213) The compelling arguments throughout prove this lack of sustainability and the necessary steps he suggests to resolve the situation are credible. Perhaps the greatest obstacles to implementation remains a lack of political will to see these essential changes through to fruition, as well as the requisite leadership to empower such a transition.

Following the publication of this book in 2014, Stephen Roach has remained a vocal advocate of potential areas of improvement to the current approach. In one of his most recent related commentaries, he explained the background on what fermented into the spat surrounding the Asia Infrastructure Investment Bank (AIIB). In this instance, the U.K. agreed to join the initiative while the U.S. vocally protested and abstained. Although Roach’s latest book highlights past symbiotic policy approaches, he argues for the continuation of this cooperative pattern as each country seeks an efficient way forward. But in contrast to the mutual support historically found between U.S. consumer demand and Chinese production drivers, the AIIB disagreement illustrates one of the many potential minefields on the horizon. While the noise surrounding the often dysfunctional relationship found in such disagreements often disguises the fundamental realities in play, Unbalanced provides a valuable and comprehensive blueprint for understanding the main drivers of the bilateral relationship and in turn world affairs more broadly.

Although ostensibly focused on two countries, the true breadth and significance of this book stretches throughout the global political economy. But Stephen Roach's deep yet captivating analysis of economics in this book and his long career in this field belies this volume's greatest contribution. Instead, his empathetic search for the true motivations and psychological drivers of today’s leading world powers uncovers deep insights that most modern international relations books never manage to attain. The implications for other countries worldwide are material and receive significant attention throughout.

Even if the concept of a G-2 might not make sense for a range of reasons, the challenges faced by a lack of coherence in contemporary governance mechanisms for the world economy merits serious consideration of the two potential members. Just as codependent relationships may benefit from a counselor to help chart a path toward recovery, Stephen Roach skillfully plays that role in the currently unfolding crisis. In doing so, Unbalanced gives an uncommon view into the present predicament and requisite steps to resolve it.

Carter W. Page is Founder and Managing Partner of Global Energy Capital LLC. He is a Fellow at the Center for National Policy in Washington and an adjunct faculty member at New York University’s Center for Global Affairs.