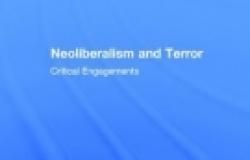 The articles in the book were originally presented at the conference “Neoliberalism and/as Terror”, held by the Critical Terrorism Studies BISA Working Group on 15-16 September 2014, at Nottingham Trent University, and originally published in a special issue of Critical Studies on Terrorism. In the first half of the book, the contributors explore the relationship between neoliberalism and terror through different angles, analysing how neoliberalism has transformed the way in which states provide internal and external security through the militarisation of security spaces and the suppression of dissent, and how the ‘war on terror’ is functional to this transformation.

The first chapter, by Mark Neocleous, explores the role of contemporary security discourses in strengthening the Western neoliberal order, particularly focusing on how those discourses create a “Universal Adversary” that becomes the focus of national security practices. The author uses the Department of Homeland Security (DHS) National Planning Scenarios document, which outlines 15 potential emergencies, most of them instigated by a terrorist attack and by definition presupposing the existence of an enemy. The most obvious Universal Adversary is the terrorist: but planning scenarios also mention “disgruntled workers” among the possibilities, allowing the author to make the connection between the war on terror and a class war, in a context where “the lines between terrorism, subversion and legitimate dissent become blurred” (p. 17).

Both in the US and the UK, the security planning scenarios attempt to anticipate the potential disasters of the future and make the citizen aware of the continuous and persistent logic of the threat. This approach necessitates an exercise of projecting imagination and fear on to the future. In their analysis of the “unknown” as the guide for current counter-terrorism efforts, Neocleous and (in the next chapter) Jackson analyse how Donald Rumsfeld’s famous comment about the known knowns, known unknowns and unknown unknowns has guided a contemporary security strategy heavily structured around “the unknown, the uncertain and the unexpected” (p. 15), and how these concepts become the central argument of planning scenarios and response strategies.

The role of imagination and fantasy on security discourses and practices is also analysed by Richard Jackson in the following article, which is a follow-up of Jackson’s previous work: the paranoid logic that guides the discursive construction of the “terrorist” enemy, the exaggeration of the threat, and a counter-terrorism response based on these elements that has paved the way to torture, pre-emptive wars, illegal detentions, mass surveillance and extra-judicial killings. The strategy is followed despite the absence of any evidence with regard to the effectiveness of those practices.

For Jackson, this state of affairs comes after some necessary steps taken after 9/11, including (a) the conceptualization of terror as something new and unknown, with an overall rejection of all previous knowledge about terrorism; (b) the need for pre-emptive action to govern the unknown; (c) the legitimation of imagination and fantasy as a counter-terrorism tool, and (d) a permanent condition of ‘waiting for terror’ (p. 35). The consequences include the institutionalization of the state of exception and the politics of fear, and the adoption of counter-productive practices ranging from pre-emptive wars to the use of drones, control orders, and mass surveillance.

In the following article, Christos Boukalas makes the most thought-provoking contribution of the volume, exploring the role of the contemporary counterterrorism response in enabling the reconfiguration of accumulation and capitalism, and analysing the war on terror as a class war. He begins by arguing that the economic and financial turbulence of the 1990s and the emergence of the anti-globalization movement created systemic challenges for the economic system. In this context, 9/11 was extremely useful as the crisis point around which the protection of accumulation for the capitalist elite could be undertaken, while directing the attention of the public at an external enemy. 9/11, he argues, caused a massive realignment of the population with the state at the very moment it was undertaking policies to support the shift to an accumulation mode extremely detrimental to popular interests.

The shift was consolidated through a homeland security Keynesianism involving the massive transfer of public money to the private sector: a movement repeated during the financial crisis in 2007. This new Keynesianism through counter-terrorism policy has allowed for the construction of an economic sector: homeland security, including the reorientation of sectors from armament to pharmaceuticals to finance through the lens of security. In parallel, the impact of counter-terrorism policies on civil liberties, freedom and the rule of law prevents the population from taking part in antagonistic or dissenting political activities, in effect imposing “an effective ban on popular politics” (p. 66).

In his contribution, Henrique Furtado puts forward a strong critique of mainstream and critical terrorism studies alike, in the sense that both schools remain rooted in Global North’s conceptions and ignore the experiences of other parts of the world. In Latin America, and concretely in Brazil, a history of authoritarian regimes has paved the way for a reversed discourse in which the term terrorism is mainly used to describe the actions of the repressive state, and where the memory of past atrocities is used as a form of resistance.

Apart from the notion that counter-terrorism might be in itself an exercise of neoliberalism and a form of “class war on terror”, the book draws on a wide range of case studies from the UK, the US, the European Union and Latin America. In the second part of the book, the authors turn to the effects of neoliberal ideology and economics on counter-terrorism and vice versa. The authors analyse issues such as the emergence of a new professional security culture around counterterrorism; how the neoliberal state’s fascination with intervening into people’s lives manifests itself around deradicalization programmes; and the representation of terrorism within contemporary cultural products, including video games, designed to perpetuate neoliberalism agendas.

Neoliberalism and Terror will be of great interest to readers within the fields of International Relations, Security Studies, and Terrorism Studies. As a provocative and compelling analysis of the relations between (neoliberal) economics and counterterrorism, it will probably remain outside the mainstream circuits of the analysis of contemporary terrorism, focused as they are in precisely those conceptions of the universal adversary and the external threat. The attempt to challenge these assumptions and the consequent responses to them should attract well-deserved attention.

Mabel González Bustelo is an international advisor and consultant in peace and security, Contributor Analyst to Wikistrat, and former Fellow of the Global South Unit for Mediation (BRICS Policy Centre, Brazil). @MabelBustelo

Ukraine and the Changing Normative Architecture of World Order

Ukraine: How an Armed Conflict Could Play Out

Picking up the Pieces in Afghanistan: Need for Smarter Diplomacy and Targeted Counterterrorism