The Ocean is Changing Faster than Ever. Investing in Nature can Help Protect It 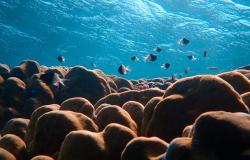 Multi-sector collaboration and innovation are needed to protect and regenerate precious ecosystems and reduce ocean risk.

The COVID-19 pandemic has shown all of us the interconnectedness of our world and how important it is to invest in nature. Yet, the ocean is often forgotten as a critical, investible solution to both mitigate risk and build resilience to change.

Last year’s IPCC Special Report on the Ocean and Cryosphere in a Changing Climate underscores how human activity is now changing the ocean faster than at any time in the past 65 million years. The year 2019 was declared as the warmest ever for the ocean and last month saw the second-lowest extent of Arctic sea ice since satellite records began.

Ocean heating from CO₂ emissions results in a rise in sea levels, intensifying storms and damage to marine ecosystems that provide essential services including their protective benefits, food security and climate regulation. Changes to the ocean pose threats to the lives and livelihoods of billions of people, most of them in the poorest and most vulnerable communities in the Global South and in Small Island Developing States (SIDS), with women and girls especially hard hit.

It also results in significant costs: according to a research paper published in Nature Climate Change, by 2050 the global community will face annual costs of more than $1 trillion in coastal urban areas as a result of the combined effects of rising sea levels and extreme weather events on our coastlines. Insurers alone have paid out more than $300 billion for coastal storm damage in the past decade – far less than the significant and constantly rising costs to governments and taxpayers.

According to the Insurance Development Forum, about 70% of natural catastrophe losses worldwide are uninsured – rising to 90% in middle-to-low income countries. This “protection gap” is a serious problem, adding to the already disproportionate burden of natural disasters on vulnerable coastal areas.

So far, our global response has not matched the scale and complexity of the challenge. Standard investment models don’t take account of climate change or other risks – neither do many government plans – and there is no global governance mechanism to address this.

We need to better understand ocean-related risks and shift our global response to anticipate and adapt to hazards, rather than addressing them post-disaster. Investing in nature-based solutions plays a vital role in that.

Coastal ecosystems, such as coral reefs, salt marshes and mangroves, are critical natural assets that can reduce disaster impacts. Mangrove forests provide more than $80 billion per year in avoided losses from coastal flooding and protect more than 15 million people. Coral reefs can reduce coastal flooding and erosion by dissipating as much as 97% per cent of wave energy, and reduce the annual expected damages from storms by more than $4 billion.

Green solutions have been consistently found more effective than their grey counterparts. The UN estimates that investing just $6 billion a year in nature-based disaster risk management measures would save the world $360 billion in the next 15 years.

Yet a lack of understanding around the full value of these ecosystems has led to significant degradation and loss, making these habitats some of the most threatened on Earth. To protect and regenerate these precious assets – and meaningfully address ocean risk – we need a transformative response that fosters multilateral collaboration and innovation.

The good news is that such a response is gaining momentum. Last year, the Ocean Risk and Resilience Action Alliance (ORRAA) was created. It gathers actors from the insurance and finance sector, ocean NGOs and governments to incentivise investment in coastal natural capital and create innovative finance solutions. ORRAA’s aim is to drive $500 million of investment into nature-based solutions by 2030 by surfacing and scaling projects that range from creating a carbon and a resilience value for mangrove ecosystems in the Caribbean to providing access to microfinance tools for small-scale fishing communities in the Philippines.

Other initiatives focus on mitigating ocean risk by investing in nature-based solutions. These include efforts around the world to increase the amount of ocean fully protected in marine areas towards the scientifically supported target of 30% by 2030 and efforts by impact investors to support sustainable ocean activities like kelp or bivalve farming.

Addressing ocean risk is urgent. Sea level and population density projections indicate that 800 million people will be at risk of coastal flooding and storm surges by 2050. But nature is offering effective solutions. By taking advantage of public-private cooperation to invest in them, we can reduce the environmental, economic and social impacts of ocean change; regenerate precious natural assets; and build resilience in the most exposed communities around the world.

The Ocean Risk and Resilience Action Alliance was founded by Ocean Unite and AXA and is co-hosted by the Global Resilience Partnership and Ocean Unite.

Photo by Francesco Ungaro from Pexels

The Kunming-Montreal Global Biodiversity Framework is a milestone. Implementation will be the biggest test