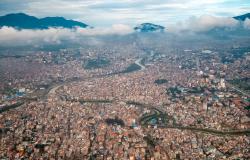 Blair Glencorse and Narayan Adhikari explore the domestic and international roots of Nepal's latest air tragedy, and discuss what can be done to end them.

Here in Kathmandu, Nepalis are spending the day mourning the tragic Yeti Airlines plane crash yesterday, which killed 72 people. This was the 67th plane crash in 60 years in this country- surely the worst track record for air safety in the world, taking into account the number of flights on a daily basis. While the immediate reason for the crash is as yet unclear, the deeper underlying cause has been obvious for decades.

Aviation in Nepal is beset with deep-set corruption and mismanagement. Since the 1990s, graft within the sector has brought down a Prime Minister, led to frequent charges of embezzlement and led to incomplete infrastructure and development projects. The government wants to keep tight control, so the Civil Aviation Authority of Nepal (CAAN) serves both as the service provider and regulator for the sector. This system allows the Director General of CAAN to issue tenders, put in place regulations and oversee compliance- a clear conflict of interest. It is this, among other issues, that has led the EU to ban Nepali airlines from flying to Europe. The CAAN has consistently misused its authority to promote narrow business interests; and political parties have provided protection for airlines that do not meet safety and operating standards. For example, the group that owns the plane that went down yesterday- and many others that have crashed in recent years- and which has not put in place necessary safety reforms, has close links to a former Prime Minister.

Nepal’s airline industry is plagued from top-to-bottom with issues. Many airports do not comply with relatively straight-forward international standards, for fencing, parking and emergency vehicles for example; and aircraft and airports often lack basic technology. At the same time, pressure on airlines to operate more and more flights has increased as kickbacks within public infrastructure have led to sub-standard roads.

Europe- for all of its safety concerns- is part of the problem too. Three years ago, Airbus- the European aircraft manufacturer- admitted to paying at least 340,000 euros to secure a contract to provide planes to Nepal Airlines, further entrenching corrupt practices within the industry and the sense that private benefit trumps public safety and service. At the same time, there is little incentive for international airlines to push for the critical changes needed because the weakness of Nepali airlines has allowed them to grow their market share.

The rescue efforts for these disasters are no better, despite their frequency- a lack of equipment, ineffective coordination and inability to mobilize technical experts has hampered previous operations. Poor communication from the government- which we are again seeing after this crash- is also leading to rumors and misinformation. As with previous crashes, a committee has been formed to investigate this most recent accident- but the prospects of any meaningful accountability through this process are slim. Nepali governments have become adept at setting up these kinds of bodies that are either mismanaged, under-resourced, ignored- or all three. Reports into previous plane crashes in Nepal- including the recent Tara Air crash in May 2022- have been late or incomplete.

Despite the challenges, Nepal has assets on which it can build. Unlike other South Asian countries like Pakistan, for example, the pilots in Nepal are well qualified. Airlines like Buddha Air are well-managed and have shown that a relentless focus on training and standards can ensure safety, even within a difficult context. And there is no shortage of information as to how to safeguard the integrity of the aviation industry.

No doubt there will be plenty more outpourings of sympathy for the victims and their families in the coming days from Nepali politicians. Instead, the government should be proactive and honest in how it communicates with the families of the victims and commit to fundamental reform of the airline sector to fight corruption and place safety front and center. The CAAN should be split into two separate bodies- one to oversee operations and one to regulate the industry. CAAN investigative reports into crashes like these in Nepal should be made public- so citizens are able to track exactly what actions are being taken to improve safety. In this case, the Commission for the Investigation for the Abuse of Authority also has the mandate to carry out a serious investigation into how corruption precipitated the disaster, and any recommendations should be enforced through the courts.

Nepal should commit to ensuring immediate implementation of the Convention on International Civil Aviation, including the provisions that relate to the airworthiness and certification processes for aircraft. While engagement with China is not without political issues here as much as anywhere, the Chinese example is instructive for Nepal- Beijing has transformed its air disaster record over the past several decades through a relentless focus on safety and regulation of competition.

All of this would go a long way towards ensuring Nepal is removed from the EU air safety list; boosting the tourism sector on which the country is so reliant; and rebuilding trust with the Nepali public. But above all it would avoid these kinds of accidents. The Yeti airlines crash is another tragic reminder that corruption kills.