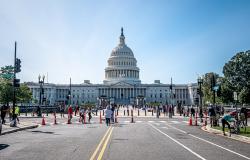 Scott Montgomery explores the stage and actors shaping the end of the Trump era, and reminds us that people not rules are ultimately responsible for its legacy.

Watching the second impeachment trial of Donald Trump, an epochal event in U.S. history, I could not take my eyes from the rostrum. Though attentive to the words being spoken, with their pointed meaning and sharp emotion, I could not unseize my view from the polished stone wall that framed every speaker. It was—and is—as arresting as anything said during this extraordinary, profoundly disturbing trial.

Disturbing, of course, because its outcome was hardened before it began. And because this truth and the trial itself made any call “for unity” a flail and a farce. Republican anti-Americanism—by which I mean anti-democratic, anti-rule of law, and anti- pretty much everything any of the Founding Fathers stood for—had closed ranks, ignoring altogether how the courage of a few in the party embarrasses the cravenness of many.

The rock of the rostrum is called breccia, from the Italian for “rubble.” The specific type in the Senate Chamber is known as Levanto Marble, also ‘Rosso Levanto’ since most often red or red-purple in color), and comes from the Liguria area in northwestern Italy. It isn’t a real marble per se, however, but a form of serpentinite that has been highly brecciated—fractured, shattered, partly ground into jagged gravel, with variably sized pieces—by massive forces related to mountain-building. It was subsequently marbleized by a sequence of events that began with hot, highly pressurized fluids that further fractured the rock and precipitated white veins and matrix filling of calcium carbonate. This was then subjected to further heating (mountain building is complex and multiphase process), converting the carbonate into marble.

Democrats made the case against Trump with a warning. Failing to convict would release him to attack US democracy again in some way. They suggested that Trump represents a predictable and uncontrollable risk. Most Republicans who don’t live in the sulfurous realm of rightwing media know that Trump was an ignorant, capricious president, damaging to US prestige and power. They also suspect, given how many of his associates were jailed, that his administration was no less corrupt Warren Harding’s. Yet no matter. Even the Capitol attack, when senators were themselves mere seconds from probable assault—videos revealed a riled mob out for Congressional blood—made little difference in the end. Trump’s lawyers, on the eve of their defense, were blessed by a visit from Ted Cruz, Mike Lee, and Lindsey Graham. They were there, Cruz said, to “share thoughts” on strategy. The next day saw counter videos presented starring Black Lives Matter, with childishly dramatic music added.

Serpentinites are not usually red or purple, like those in the Senate Chamber, but green, the color of serpentine minerals. The Rosso Levanto, however, contains a large amount of hematite, a form of oxidized iron produced by the heated fluids noted above. The rock type serpentinite, meanwhile, while not especially rare, has a unique meaning. It represents material from the upper mantle (below the Earth’s crust) thrust upward, usually into a thick wedge of sediments. This happens where converging tectonic plates cause oceanic crust and mantle to be ruptured, chemically altered, and “violently” emplaced as a series of highly-deformed bodies along a continental margin.

This week, in the midst of the impeachment trial, Ezra Klein of the New York Times interviewed Adam Jentleson, former deputy chief of staff for Senator Harry Reid. The interview was valuable both for what it said and didn’t say. In brief, these two experienced voices noted that virtually every Senator bemoans the toxic place that Congress has become. Klein and Jentleson believe “incentives of the system” are largely at fault, meaning aspects like the filibuster that encourage one party to block major legislation by the other, especially if it might accrue public favor. There is a familiar ring to this. Other ex-insiders have similarly said that Senate rules must be changed to improve the structure of motivation and thus behavior.

But I feel this is wrong. Rules have importance and authority, but it is people who decide to evade or pursue them with extreme, brutal efficacy. The breathtaking level of obstruction against President Obama by the GOP, led by Senate majority leader McConnell, was not foreordained. People are the problem—people and a GOP culture of contempt and scorn for “the other side.” Blaming incentives, like blaming only one person, is a way to reduce responsibility for the party that brought a wreck of a human being to the highest office of the land and to this historic second trial.

There is probably a record somewhere indicating who chose Rosso Levanto as the lithic theme for the US Senate Chamber. Breccias were not much favored by Greek architects and sculptors, who preferred whiteness that they could paint, often in brilliant colors. Imperial Rome was a different story. The first emperor, Octavio Augustus, said he found a city of bricks but left a city of marble. This included breccias, like the multicolored pavonazzetto (“peacock”), which the Romans considered especially valuable, using it in the pillars and facings of public buildings. I admit a temptation to viewing this as unconsciously prescient. Similarly, perhaps, without ever intending or suspecting it, the architects who rebuilt the Senate Chamber in 1949-1950, in their choice of Rosso Levanto, provided a purloined portrait of what would become of the hallowed body and Congress as a whole in a century yet to come.

After the vote, Sen. McConnell offered words that some found shocking: “There is no question — none — that President Trump is practically and morally responsible for provoking the events of the day…The people that stormed this building believed they were acting on the wishes and instructions of their president.” But perhaps not so shocking. The civil courts will deal with this, he was saying. Congress, even as the highest court on impeachment, should be left to wash its hands of any liability for conviction. Donors to the GOP cause must be assured that Mr. McConnell, as the leaden face of a party that has otherwise long abandoned Lincoln, has chosen a higher road of truth, not confession.

In the end, geology, like politics, is as much about perception, ways of seeing, as it is a means of knowing. Rocks are not background to events or a mere setting for biology. They are at once the stage and the protagonist of the planetary theatre, the Theatrum Orbis Terrarum. Every rock or, in common parlance, every stone, is a tablet of narratives. Along the cliffs and shores of the current geological era, these are often narratives of erosion, force, alteration, and deformation.

Photo by Joshua Santos from Pexels