From Protest to Revolution: France’s and America’s Protest Movements 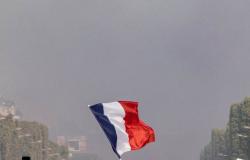 Agneska Bloch draws parallels between the French Yellow Vests movement and George Floyd protests in the United States, and the different approaches taken by Presidents Macron and Trump in response.

When the Yellow Vests movement first erupted in France in November 2018, the stakes for Emmanuel Macron were high. 18 months into his mandate, the 40-year old French President had faced little opposition, “vertically” enacting sweeping labor and tax reforms and announcing ambitious plans for the future of the European Union, all the while laying the groundwork to authoritatively exercise smart power abroad. So when protests broke out across France against his government’s fuel tax increase, Macron immediately realized the existential threat they posed to his reformist vision for France, Europe, and the world.

President Trump, on the other hand, has all but dismissed the George Floyd protests against anti-Black police violence that began in May 2020. Amid the twin health and economic crises caused by the coronavirus and a complete absence of American global leadership in pandemic management, Trump was enjoying the highest job ratings of his presidency. Having come to power on a white supremacist platform and already obliterated US credibility abroad through abuses and misuses of soft and hard power alike, the American president saw neither domestic nor international incentives to meaningfully respond to the protests.

With the last illusions of American global credibility and moral high ground thus shattered, Macron finds himself “relatively lonely” on the international stage. Having narrowly survived the height of the Yellow Vests protests, he is now spearheading not only the French, but also European and global responses to the coronavirus – and in the process, doubling down on his cosmopolitanism, so reviled by the protesters. Evidently, Macron has managed to have his cake and eat it too. Trump, on the other hand, whose approval ratings have plummeted to an all-time low, has neither.

Just as the anti-elite Yellow Vests call for President Macron’s resignation, the anti-racist George Floyd protestors are demanding the resignation of President Trump. But while both movements are revolts against the dysfunctional power structures that shape the two countries and the presidents who embody them, they are also significantly different. The Yellow Vests are protesting working-class exclusion from the past 40 years of globalization, while the George Floyd demonstrators are rejecting anti-Black racism dating back to America’s founding.

The French Yellow Vests movement, like America’s swelling demonstrations against institutional racism and anti-Black police violence, are grassroots, leaderless, or as some Black Lives Matter activists put it, “leader-full,” and faciliated by social media. Both, moreover, have led to violence. Arson and vandalism in the French capital, where wealth and power are concentrated, quickly became a hallmark of the Yellow Vests in late 2018. In the United States, on the other hand, the opportunistic looting and rioting that have surrounded the George Floyd demonstrations are not part of the greater protest movement. But despite this crucial difference, both countries have seen aggressive responses from police, most egregiously in the United States. At least thirteen were killed during the first week of protests alone, over 14,000 demonstrators have been arrested since May 27, and countless others have been hit with batons, tear gas, rubber bullets, and pepper spray.

The movements also share substantive similarities: both center on victims of systemic exclusion, and respond to endemic historical failures in their societies.

The Yellow Vests – named after the fluorescent jackets worn by motorists – demand an end to the exclusion of the French working class from the successes of globalization, which have dramatically exacerbated the divide between wealthy and poor. “Peripheral” France, where economic growth is weak and unemployment high, has been the hardest hit. For working-class people who do not live in urban centers and must rely on automobiles, the fuel tax increase that triggered the first Yellow Vests demonstrations in November 2018 was simply the last straw – or to quote a French idiom, the drop that made the vase overflow.

In the United States, however, the George Floyd protests viscerally reject the racism inextricably woven into America’s fabric. Indeed, demonstrators are not only denouncing anti-Black policing; they are demanding a reckoning with the white supremacy on which America was founded.

The tragic murder of George Floyd by four Minneapolis police officers on May 25, 2020, then, was not an “aberration” in the country’s history. Floyd was the most recent victim of anti-Black police violence, following Breonna Taylor, Oscar Grant, Stephon Clark, Mario Woods, Jessica Williams, Steven Taylor, Eric Garner, Tamir Rice, Sandra Bland, and Amadou Diallo, among many others. His murder was yet another manifestation of anti-Black racism in the US that activists have been fighting since long before the Civil Rights movement, and which ushered Donald Trump into the White House.

But the Yellow Vests and the George Floyd protests are not merely demonstrations against structural dysfunctions in their respective societies. They are revolutions against presidents who embody those dysfunctions.

In France, the Yellow Vests have unrelentingly targeted Emmanuel Macron’s elitist electoral platform. Macron founded the radical centrist movement, La République en marche, on Europeanist cosmopolitanism and pro-business liberalism, promising to rebuild public trust and create paths to success for victims of globalization. Yet Macron, himself a poster child of the French elite, quickly earned the epithets “arrogant” and “president of the rich.” Barely a month after the beginning of the Yellow Vests protests, his approval ratings had dropped to 24 percent, the all-time low of his presidency.

Yet to his credit, the French president quickly grasped the existential threat to his presidency posed by the popular revolutionary movement. In an attempt to correct course, Macron’s government suspended the fuel tax that had ignited the protests. Next, two months after the eruption of the first demonstrations in November 2018, the president launched months of public deliberations with constituents across the country to seek to understand the roots of the uprisings. Although many considered these conciliatory gestures superficial and disingenuous, they boosted Macron’s credibility enough to salvage his presidency.

Unlike Macron, President Trump has doubled down on the racist and xenophobic platform that the George Floyd protesters are rejecting. Rather than engage in debate and deliberation, Trump has sought to suppress the demonstrations. Although he has refrained from invoking the Insurrection Act, which would allow him to deploy active-duty troops to respond the protests, Trump has urged governors to call in the National Guard to “dominate the streets,” called protestors “thugs,” and jumped to the defense of law enforcement.

But these reactions should not come as a surprise from America’s “First White President” – as essayist Ta-Nehisi Coates argues. Trump actively ran and won on an ideology of white supremacy. Predictably, his base has not abandoned him: although the president’s approval ratings dropped by 10 points at the height of the protests in late May through early June, they have now settled at his term average.

So unsurprisingly, Trump’s recent executive order on policing reform, the closest he has come to a conciliatory measure, falls far short of offering structural solutions. Not only does it directly contradict protestors’ demands to reallocate funding from police departments to social services, but it ignores the issue of qualified immunity, which many argue protects law enforcement from liability.

So while both the Yellow Vests and George Floyd protests target fundamental dysfunctions in their countries and in the agendas of their presidents, only Macron recognized the existential threat they posed and took the call seriously. Trump, rather than respond to the ever-growing popular movement against anti-Black racism, is digging his heels deeper into the white supremacist, law-and-order ideology that paved his path to the White House.

Agneska Bloch is the 2020 Geostrategy and Diplomacy Young Professionals in Foreign Policy Fellow and an Analyst in European Affairs at a Washington think tank.

Photo by Nicolas from Pexels

Photo by Life Matters from Pexels