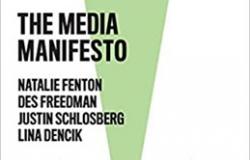 That this is a time of haunting must come as both paradoxical and natural a statement – especially when called upon to reflect on manifestos. Banal though it may be to nod to Marx and Engels when thinking of the manifesto as a form of communicative scholarship and social praxis, it is useful to remember that Derrida too, precisely when he himself was called upon to reflect on Marx in the early 1990s, succumbed to the powerful significatory valence of spectrality and haunting (Derrida, 2006). A manifesto is supposed to arrest the spirit (or spectre) of its age and either materialise or dispel it; that said, when is the right time for a manifesto to capture the spectre of its age? If we are to believe Derrida, the right time for any intervention is when the time is ‘out-of-joint’: disarticulated, dislodged, deranged (2006, p. 20). In a deconstructive move, then, the best time for a manifesto is when the time is not right – and, to be sure, one would be hard pressed to find a time that is more ‘out-of-joint’ than the present.

The authors of The Media Manifesto, to whom I shall hereafter be referring to as the Goldsmiths Collective, set themselves an awesome task: articulate the problem, which is a complex as it is elusive, and call for ‘radical social change’ (p. 25). This manifesto, in other words, is a collective praxis of resistance from a group of scholars working in an academic field whose corresponding industry is more supine than ever. When major news networks (ABC, CBS and NBC) cut away from a recent press conference, in which President Trump succumbed to a barrage of baseless accusations of fraud during the 2020 Presidential Election (Grynbaum and Hsu, 2020), and were applauded for doing so by many likeminded networks and millions of liberal commentators on Twitter, I could not help but think of two questions. First, why did they never do it earlier – say, four years ago when President Trump was accusing the whole of Mexico of being criminals, and/or when he was banning Muslims from travelling to the US, and/or when he was separating refugee children from their mothers, and/or when he refused to condemn the American far right for the atrocities in Charlottesville? And, second, what would it take for the likes of the BBC to display similar journalistic integrity when, for instance, the British Prime Minister insisted that the country’s response had been ‘world-beating’ when we know as a matter of fact that ‘the UK, and England in particular, has suffered egregiously poor outcomes in managing the Covid-19 pandemic’ (Paton, 2020)? It is this state of affairs that the Goldsmiths Collective sets out to castigate and correct.

In the first chapter, ‘Challenging Media Power Today’, Des Freedman lays out the problem: our universities ‘debt machines’; our welfare systems ‘emaciated’; our systems of government ‘opaque’; our media ‘insulated’, ‘complacent’, and given to a market logic that not only jettisons any duty to a public purpose, but, more importantly, actively undermines people’s welfare (pp. 3-5). In a sense, therefore, Freedman’s chapter argues that the media industry has lost its conscience – if ever it had one – and calls to mind the words of Del Boy, the popular central character of the British sit-com Only Fools and Horses: ‘a conscience is nice, but business is business’.

In the second chapter, ‘Claiming Media Justice’, Justin Schlosberg takes on the so-called ‘liberal media’ (p. 27). Co-opted by forty years of neoliberalism, the market logic of the liberal media has, in his words, ‘amplified and normalized … various forms of racism, xenophobia and misogyny’ (p. 29) by, I would argue, staunchly refusing to engage with its own ‘extreme centre’ bias (Ali, 2018). This unproblematised positioning, which glorifies ‘balance’ and castigates all forms of ‘populism’, is not only dangerous but also insidious. The so-called liberal media are presented with a moral dilemma which they repeatedly evade by refusing to accept that not all ‘populisms’ are the same. Quite simply, the so-called ‘populism’ of the in-work poor who resort to using foodbanks is not the same as the hateful populism of the far right, which seeks to blame refugees, immigrants and gays for the ills of a socio-economic system which is rotten to the core. At the risk of sounding like Homer’s Cassandra and despite Joe Biden’s welcome victory, I do not think that the liberal media of the extreme centre will hold against the onslaught of ‘alternative’ (or alt-right?) media platforms such as Parler (Paul, 2020), the One America News Network (OANN) (Wilson, 2020), or the soon-to-be-launched GB News fronted by Andrew Neil and hailed as the ‘British Fox News’ (Waterson, 2020). Media reform must be comprehensive and meaningful. Whilst even critics of concentrated media power hark back to a ‘mythical golden age’ of ‘effective gatekeeping against wild or dangerous narratives from the social fringes’, this manifesto, quite rightly, asks ‘effective for whom and for what ends’ (Fenton et al., 2020, p. 47).

In the next chapter, ‘Advancing Data Justice’, Lina Dencik impressively summarises the important work on digital media, big data and advanced neoliberal capitalism by Jodie Dean (2010), Wendy Brown (2015), Byung-chul Han (2017), McKenzie Wark (2019) and others, but explicitly references Zuboff’s The Age of Surveillance Capitalism (2019). This is an instrumental move for the Goldsmiths Collective because to the extent that it commits itself to meaningful reform, it has to also articulate the present and future arenas of social and political struggle: the extensive datafication of social experience for the purposes of electoral manipulation and commercial exploitation, the asphyxiating use of surveillance mechanisms for the sake of ‘national security’, and the depoliticization of datafication – that is to say, the reliance on a fallacious impression of technology as ‘neutral’ to solve what are, essentially, problems of social, economic, and political nature.

In ‘Articulating a Politics of Hope’, Fenton then retraces the issues raised by Freedman in the first chapter, but in a more targeted way with a view to spelling out what needs to be done. Throughout this chapter, there is a refreshing conceptualisation of ‘the people’ as a collective agency of change; I say ‘refreshing’ because Fenton is not naïve. Her astute critical insight articulates that unless we conceptualise radical political strategies built to promote democracy and challenge concentrated media ownership, the project is doomed to fail. In her words, ‘[t]o change this direction of travel requires political and economic alternatives … that are just and inclusive, ecologically wise and socially regenerative shifting economic and political power back to communities and democratic institutions’ (p. 86).

This is what the collectively written final chapter, ‘Conclusion: A Manifesto for Media Reform’, sets out to do. Organised around three fundamental principles – wholesale egalitarianism, meaningful democracy, and financial and environmental sustainability (p. 101) – the Goldsmiths Collective makes a number of recommendations in the following areas: setting out a framework for media plurality, organising a more democratic, diverse and devolved public service broadcasting, creating an accountable and sustainable press, and drawing a supra-national digital media policy that would put paid to the domination of global technology giants. Speaking as an academic working in the same field as the Goldsmiths Collective, I would add to all this the need to reform university curricula with a view to establishing a more politically and philosophically inflected approach that would replace the current emphasis on entrepreneurialism and employability.

To be sure, I can imagine many established, pragmatically minded media professionals reading this manifesto and dismissing it as ‘misguided’ and/or ‘pie in the sky’ and/or ‘naïve’. This kind of response is probably to be expected. However, to the extent that this collective effort puts forward solid recommendations for the reform of a whole industry, it constitutes a powerful and imaginative proposition that not only insightfully articulates the complexity of the problem but also makes a start at (re)conceptualising a radical political imaginary. Indeed, this manifesto has not only captured the spirit (or spectre) of change that our age sorely needs but has made a wonderfully inspiring start at materialising it.

Dr. Theodore Koulouris is Senior Lecturer in the School of Media at the University of Brighton.

Derrida, J. (2006) Specters of Marx: The State of Debt, the Work of Mourning and the New International. Translated from French by P. Kamuf. London: Routledge.