Book Review - The Deficit Myth: Modern Monetary Theory and How To Build a Better Economy 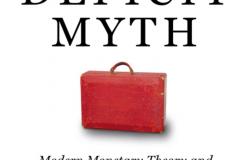 Stephanie Kelton's new book The Deficit Myth has stirred up a storm since its release and has generated a robust and interesting debate on the limits to government spending. Kelton's work is especially relevant at this time when governments around the world have been engaged in substantial spending to respond to the Coronavirus pandemic. By laying out the insights of Modern Monetary Theory, Kelton questions the real limits to government spending, especially for the Federal Government of the United States. This book challenges the most basic assumptions about government finances and the role of the government, by laying out the main propositions of Modern Monetary Theory and its related evidence.

In The Deficit Myth, Kelton argues that government budgets are not like household budgets, and that governments with monetary sovereignty do not face a budget constraint as they cannot run out of the currency that they issue. This is because tax revenues, according to MMT, do not finance government expenditure. Therefore, tax revenues being structurally lower than expenditures for several years is not in and of itself a problem as governments can always issue more of its currency to spend further. She argues that taxation is not important for raising revenue, but for regulating inflation, encouraging and discouraging certain activities, and redistributing income and wealth to reduce inequality. In fact, taxation is only necessary to create demand for the currency issued by the currency issuing government and to make people produce goods and services for the government.

She argues that budget deficits are not evidence of overspending, but that inflation is evidence of overspending. It follows, therefore, that inflation is the only constraint on government spending, not the government deficit or debt. Kelton argues that the government can and should use fiscal policy to get the economy to full employment or zero unemployment, not the natural rate of unemployment, and keep it there. The level of government deficit is immaterial.

The excellent narrative provided in this book goes through the intricacies of how government spending is operationalized in governments with monetary sovereignty, especially the Federal government of the United States. The key point she makes is that government spending does not use the money collected in the form of taxes, but rather spending creates the purchasing power which can then be partially taxed back, if necessary. In many ways, the government creates money much like a bank does: by creating deposits, in keeping with the Keynesian insight. Banks do not wait for people to deposit money to create loans, or in other words, simply collect and disburse savings (as is posited by the loanable funds theory); instead, banks use loans to create deposits. Similarly, government spending creates the spending power instead of allocating tax revenues to expenditure. Furthermore, interest rates on government debt are a policy variable, and for the most part not determined by market forces.

This book has many important insights that are made in a clear, concise, and approachable manner for a non-technical audience, and has many key insights for economists and public policy experts that are consistent with the Keynesian literature on public finances, even though it takes a somewhat distinct approach to arrive at these conclusions. Critics of MMT have often argued that there is not much that is novel about it as it is a mere revival of Keynesian economics and Functional Finance (and admittedly this was also how I previously understood it). The Deficit Myth makes it evident that this is not the case. However, this distinction from Keynesian economics and Functional Finance raises challenges for the MMT framework in Kelton's book. Here I will articulate three challenges and opportunities that need further exploration and exposition that, in my view, can strengthen and clarify Kelton's framework.

First, Kelton's argument that taxation is first and foremost a mechanism to create demand for the national sovereign currency and to provision the government is an interesting one. However, this view of state money requires an articulation of a Modern Monetary Theory of the State. It appears that the MMT State has monopoly over the national currency and uses it to regulate output and employment in the economy. The government uses taxation to provision itself and to get people to produce goods and services for itself. Why does the state need taxation to provision itself? Can it not simply purchase what it needs from private producers if needed even if it did not have the monopoly over the currency? Or is it the case that people would not produce goods and services or conduct business in the currency of the state if there were no taxation? Why can it not be the case that economic agents acquire a sufficient amount of the national currency to pay taxes and yet have a different or multiple other moneys in which business is conducted? The sub-text here is that state money is the most reliable and stable one because economic agents can trust that the government can always honor its obligations. But the source of this trust is not immediately evident. The primary function of taxation in creating demand for the national currency is perhaps the weakest link in the argument, but it does not need to be so.

Second, Kelton convincingly shows that the way monetary sovereign governments actually conduct expenditure is by simply creating the money for its spending by “a few key strokes” and not by using tax collections. However, this situation will continue to not be a problem if people and businesses can trust that the government can meet its obligation using a money that will not lose its value. This trust depends not simply on the mismatch between tax revenue and expenditures (as is the case with persistent deficits), but also on the ability of the government to create the money and real resources needed to meet its obligations. This trust in the government is a key component of monetary sovereignty, which is not a part of Kelton's definition. According to Kelton, monetary sovereignty requires that a government issues its own currency that it not pegged to any other currency or gold, does not have a fixed exchange rate, and does not borrow in a currency that is not its own. However, even if a country issues its own currency that is not pegged to another currency, several governments, especially those of several developing economies, are unable to run persistent deficits as economic agents believe that this situation is not endlessly sustainable. Therefore, the US government can have an outstanding national debt of close to 100 percent of GDP and the Japanese government can have an outstanding national debt of 200 percent of GDP, but investors get skittish about debt sustainability if the public debt in Turkey is higher than 40 or 50 percent of GDP. This is partly a result of present day global economic institutions and partly a result of the lack of trust in governments to meet their obligations due to real resource constraints that either the government cannot alleviate or because people do not trust that it can. Some governments, such as those of the United States and a handful of other advanced economies, can meet their obligations in their respective currencies and even in the currencies of other advanced economies because of present institutional arrangements and imperial power. To Kelton's credit, she does discuss the global currency hierarchy that follows from this differential trust in different governments but stops short from discussing the full implications and policy prescriptions for a national government that is not the Federal government of the United States. Especially since the adverse consequences of loss of trust in the government's ability to meet its payment obligations can materialize even if the government issues bonds exclusively in its own currency.

Third, while Kelton has devoted a full chapter to questions of trade and development and whether the insights of the book apply to countries outside the handful of advanced economies, there is still a lack of attention to the details of structural features of developing economies. Apart from the issues of real resource constraints mentioned above, Kelton argues that inflation, and not the fiscal deficit, is an indicator of overspending. However, there are several structural features of developing economies that might create inflation even when aggregate demand is low. For instance, many developing economies in the world today are struggling with inflationary pressures despite the massive contraction in economic activity because of the Coronavirus pandemic. The source of these inflationary pressures varies from disruptions in supply chains of essential commodities, like food, to pressures on their exchange rates. This includes countries that issue their own currency and do not have fixed exchange rates. Therefore, in these contexts, inflation is not an indicator of overspending and reflects a more complex phenomenon. Similarly, Kelton argues that in addition to issuing their own currency with flexible exchange rates, to create monetary sovereignty, governments should not borrow in currencies that are not their own. This is good policy advice in some instances, but an unfeasible proposition in many others. Especially since private borrowers in the economy can and do borrow in currencies that are not the domestic currency, creating a source of financial instability. Therefore, the executors of spending on behalf of governments, Central Banks, often need to ensure a stockpile or secure a source of flows in foreign currency in order to maintain financial stability. As a result, even if the government does not itself issue debt in foreign currency, the government or the central bank may need to respond to the emergent currency composition of foreign borrowing, creating an additional limit to the stability of the domestic currency. This is not a concern for the Federal Government of the United States as it issues the key currency of the global monetary system, but it is a concern for many countries lower in the currency hierarchy. Furthermore, Kelton also does not explore why some countries decide to maintain currency pegs and/or fixed exchange rates despite their many challenges. She does argue for greater capital controls to mitigate this, but a revised definition of monetary sovereignty which accounts for these concerns is needed.

To sum up, Kelton's book is an important and well-argued challenge to the conventional wisdom on government deficits and debt, especially at a time when policymakers may make a sharp turn towards austerity in response to the increase in the size of government debt due to the pandemic. The Deficit Myth successfully argues that this would be a policy mistake. However, this framework has some gaps, which is not uncommon for an emerging and developing body of knowledge. Addressing these gaps is possible and should be done in order to strengthen and clarify this framework.

Devika Dutt is a PhD Candidate in Economics at the University of Massachusetts Amherst.

Book Review - The Deficit Myth: Modern Monetary Theory and How To Build a Better Economy