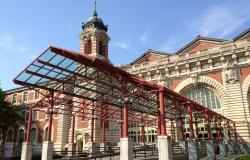 You came to the US as a refugee in the early 2000s. Looking back, how has the perception of immigrants to the US changed since you arrived in the US?

This question immediately brings to mind my arrival in the US. Imagine a scrawny teenager standing in the arrival hall of the JFK airport. In one hand he’s holding his small suitcase and in the other $30, which his mother had struggled to raise for three months back home. He stands motionless and looks at the world before him with wide eyes wondering where to go now that he is by himself. He takes a deep breath and quietly whispers: “It is going to be OK.” It was the moment America welcomed me as it has welcomed countless others who came here to escape terror and death. Each of us have lived to bring prosperity and dignity to the country we now call home.

Since that day I would say the perception of immigrants has dramatically shifted in two ways. First, the current political climate in the US has normalized a rhetoric of hatred that I have not witnessed here before. Today, all I hear is – “Refugees should be sent back, they are terrorists, they are here to take our jobs, they are radical Islamists, they will stifle our growth and progress, they are good for nothing, they are for nobody.” I am concerned that many people, people like me, will have no place to turn to for refuge. They will be subjected to adverse conditions that will make them question their human nature.

Despite some of the negativity, I have also noticed the powerful rise of grassroots movement in support of refugees and immigrants in the US. People from different backgrounds come together to create a network of solidarity, inclusion and positive action. There are many examples where people have recently stood up against hatred. A personal highlight was when the travel ban passed in the US, thousands of Americans got together at airports across the country to protest this violation of human rights, they stood their ground until refugees were released and allowed to enter the US. During the protest outside of JFK airport in New York City, I could not help but wonder what would have happened if this travel ban had occurred when I arrived in the US. But that’s what drives me forward: I always remember where I came from and what I can contribute to the place that has sheltered and shielded me.

You work in the technology sector. What impact can technology have on migration and integration? Are there ways in which technology can also cause harm to migrants? How?

I strongly believe the role of technology in today’s refugee crisis is to democratize the quest for safety and the meeting of basic human needs. A cell phone is one of the few possessions refugees take with them when they flee their homes.  And in many cases, having access to technology can mean the difference between life and death. Apps like WhatsApp and Facebook have given many refugees (myself included) an opportunity to communicate with their families without the need for an overpriced mobile network. Apps like Google Translate allow simultaneous translation between refugees and humanitarian workers, providing opportunities for refugees to better integrate into their new communities.  There are also digital programs that provide opportunities for refugees to earn their high school diplomas to be eligible to enter universities in their host countries. In fact, one of the forces that inspired me to work in the tech sector was personally witnessing and experiencing the impact of technology on refugees’ lives.

But despite the overwhelming positive side of technology, there are some ways that technology can do harm. The risk of doing harm is especially high if technology is specifically designed for refugees but is created without their input. I have seen examples of well-intentioned innovations that made refugees more vulnerable and unprotected, because, for example, some of the technology does not have the capacity to protect the identities of people who are looking for refuge. If this data lands in the wrong hands, it can lead to surveillance and further persecution of refugees. When I work with tech entrepreneurs, I always advise them to make sure their team includes of refugees or asylum seekers who can provide guidance and mentorship in the ideation process, before they develop an app for refugees.

In your opinion, what role can and should the private sector play in facilitating the integration of migrants?

One of my favorite examples of the positive role the private sector can play in the integration of migrants comes from the world’s largest yogurt factory, Chobani. 30% of their workforce consists of refugees and, in my opinion, Chobani is a leading example of how the private sector can help with the integration process. Providing an employment opportunity and training is an essential way for companies to help migrants. Not only does it allow new migrants to earn a living, but it also creates a doorway to get to know their new community and give back to the local economy. Another way the private sector can help is through working together with humanitarian organizations in developing a stronger version of the shared responsibility framework which identifies the key obligations of different actors and develops sustainable mechanisms that prevent future challenges.

How can immigrants themselves contribute to more acceptance and openness in their host country?

I remember on my very first day in my new high school, I was asked if I was a refugee. When I replied that I was, the “Are you a terrorist?” question was asked swiftly by one of my peers. After a profound conversation and sharing my story, and answering all the questions that my US classmates had about my origin, citizenship status, accent, religion, and other intricacies - I realized that stereotypes are fueled by a lack of awareness, not lack of empathy.  That conversation has awakened a powerful understanding that as a new immigrant I have an opportunity to shift the perception of refugees in my new community. That motivated me to start a Youth for Peace project, which seeks to increase participation of young people in the refugee integration process. We do it by addressing two problems: lack of understanding on the part of US residents about refugee issues and low levels of participation as active citizens by refugees in their local communities. The first problem feeds the fear that refugees are bad and further creates a division within the community. And the second problem feeds the notion that multiple organizations are treating refugees as beneficiaries of services and not as potential contributors to their new communities.

Now, I understand that not everyone can has the resources to start their own project. But willingness to volunteer or participate in your local community can create new opportunities. It allows people to understand and appreciate the importance of inclusion in our communities. It shows that refugees have the potential to be active citizens in their communities and that active citizenship is not limited to being a politician or a nonprofit worker, but can start with a simple conversation and saying “hello” to someone who does not look like you.

Sayid Abdullaev is an Associate Product Marketing Manager at Google. He is Global Governance Futures 2030 fellow. The views expressed here are his own.