The Existential Politics of Climate Change 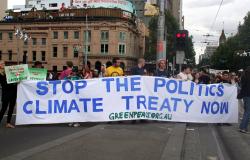 Climate politics are changing.  Beyond “politics as usual,” climate politics are becoming existential: climate-forcing and climate-vulnerable interests are both fighting for the survival of their way of life. We offer recommendations for how the Paris process and domestic coalition-building can be mutually reinforcing, emphasizing the role of labor.

Climate politics are changing.  After years of gridlock, the 2015 Paris Agreement puts domestic politics front and center – shifting from a “global deal” approach to a more flexible “catalytic” system in which countries (and other actors) set their own goals and ratchet them up over time.

At the domestic level, there is new momentum – and conflict.  Beyond “politics as usual,” climate politics are becoming existential: varying interests are fighting for the survival of their way of life. This is forcing governments to confront the enormous economic implications of a changing climate and altering the nature of climate politics.  For example, after years of denialism and obstruction, the US is considering two bills on climate change: one an expansive “Green New Deal” focused on massive government investments; the other a narrower plan to price carbon. And following the emergence of the Gilets Jaunes movement, France is engaged in a national conversation about climate change and inequality.  Similar debates are emerging throughout the developed world.

Time is short. The next round of national pledges under the Paris Agreement is due in 2020. The shift to existential politics will up-end much of the conventional wisdom around climate policy.  Fault lines will sharpen, but this will provide opportunities for progress. Seeding and supporting winning coalitions at the domestic level is critical for the post-Paris regime.

The Existential Politics of Climate Change

Distributional politics is about who gets what, and climate politics are no different: Who should pay more for energy through a modest carbon tax? How much money should the developed world provide to help vulnerable nations adapt to climate change?

Existential politics is like distributional politics on steroids: the stakes are whose way of life gets to survive. In a world of existential politics, different interests fight for their jobs, homes, and preservation of other assets. Owners of assets that cause climate change – and critically, those who work for them – face increasing threats of being put out of business or losing their jobs as coal plants are shuttered, manufacturing moves elsewhere, and renewables increasingly compete with fossil fuel-based energy.  Other climate-forcing industries – from agriculture to cement manufacturing – will also have to decarbonize, or face the prospect of going out of business.  Even if the net benefits are positive, some workers in those industries will lose their livelihoods, and for many, future employment will be difficult.  Despite definitive evidence of climate change, climate-forcing asset owners continue to pour vast resources into preserving the value of their assets and preventing more aggressive climate politics.1

At the other end of the spectrum, owners of climate-vulnerable assets, such as residents of small island states and coastal areas, farmers and insurance companies, or the tourism industry, face the prospect of losing everything as the effects of climate change intensify.  Scientists have attributed the intensity of recent natural disasters to climate change, including Hurricanes Maria and Harvey and the California forest fires.2  One study estimates that the direct damages from climate change will reduce GDP in the Southeast US by almost 30%.3  These climate-losers, at least some of the wealthy ones, are beginning to organize to forestall greater losses.  In Miami, a new political coalition has formed to protect further devaluation of real estate.  And the elite ski resort in Whistler, British Columbia, is demanding compensation from the oil sector in Alberta.

As climate-losers become more numerous and diverse, we can expect entrenched interests like fossil fuel owners to respond with more short-termism and obstructionism on climate policy.  Fossil fuel companies spent more than $30 million to defeat a carbon tax proposal in a 2018 Washington state referendum. And a renewable energy initiative in Arizona lost in the midterms, with the state utility spending upwards of $20 million to defeat it. These changes will provoke a fundamentally different sort of political contestation. Policy and strategy will need to adapt to the new reality of existential politics.

Turn losers into winners: the critical role of labor

But existential politics need not be cause for despair; it can be an opportunity to create a broad base for support on climate action. First and foremost, this requires recognizing those who will lose from pro-climate policies, and neutralizing their opposition.  The existential politics of climate change are as much about workers as about an energy transition.

The Sunrise Movement, Alexandria Ocasio-Cortez, and a growing group of Democrats and Democratic Socialists, are beginning to understand how the technocratic, “win-win” version of these ideas could be used as tools for political mobilization. The supporters of the ‘new’ Green New Deal have wisely understood that merely showing the possibility of upfront, tangible benefits is not enough; real progress requires building a coalition to demand them. Ocasio-Cortez proposes total decarbonization while employing anyone who needs a job. This reframing of the climate issue is an obvious focus in the US and other OECD nations to win over labor as a key constituent by providing them with employment.

The political effect is palpable. The Green New Deal has generated more political salience in a few months than policies like carbon taxes or a cap-and-trade systems have generated in years. Such redistributive measures, the preferred tools of economists, have dominated policy debates for decades, but rarely are they implemented at a price that can actually drive deep decarbonization. Pigovian redistribution may be elegant, but in a world of existential politics no one gets out on the streets to demand it.

Other examples show how existential politics can turn losers into winners in the OECD.  After committing to shutting its most of its coal mines by the end of next year, Spain has pledged to invest €250M in those regions affected by the policy.  Some will receive compensation for early retirement, while others are re-skilled.  Most will receive additional social aid. Germany’s coal phaseout commission has proposed an even costlier package, some €40 billion over the next decades.

In short, building broad coalitions requires a focus on labor: compensating workers in climate-forcing sectors in creative ways, like buying out pension plans from failing coal companies. If done correctly, this will galvanize greater support for pro-climate policies without acting as more corporate welfare.  Nationalizing pensions will be a considerable expense, but one targeted at a large swath of the population, rather than the wealthy few climate-forcing asset owners. It could be financed, at least partly, by other pro-climate policies, like a carbon tax. When workers know that losing their job will not mean losing their homes, they are much more likely to support climate policy.

There is some evidence that a similar approach would resonate elsewhere.  The Gilets Jaunes movement in France demonstrates that regressive climate policies will not be acceptable to the vast majority of democratic electorates.

At the same time, we must realize that owners of climate-forcing assets will also lose from decarbonization policies. Investors in oil companies and other fossil firms may demand compensation for giving up their assets—as Saudi Arabia has always demanded in international climate negotiations. With billions of dollars at stake, they will continue to obstruct progress on climate policy. Broad-based domestic coalitions are one strategy to counter their structural power.

Building domestic winning coalitions under increasingly existential political conditions will be critical for decarbonization. Yet countries do not operate in a vacuum. Rather, international drivers will be a vital part of determining whether pro-decarbonization coalitions wield power domestically and create momentum transnationally. Three steps can help.

First, the “nationally determined” nature of the Paris pledges should be strengthened to focus on politically powerful domestic priorities. Many of the 2015 pledges do this already: India trumpets the value of solar energy, China includes industrial policy goals, and Peru emphasizes forestry. The Paris Agreement requires national pledges to be comparable and measurable, and represent “progression” over time. But within these constraints, we should encourage the widest possible range of policy measures so that future political leaders see in the Paris system a vessel into which they can project their own ambitions.

Second, transnational networks of cities, states/regions, businesses, and other actors can help strengthen pro-climate interests at the national level. In the United States, cities, states, and businesses representing over half of US GDP have declared that they will adhere to the Paris Agreement despite the Trump Administration’s intention to withdraw. In other countries, like Japan and Mexico, similar coalitions are pushing their governments to higher ambition. While these interests act locally, they are networked globally, and after the Paris conference have been institutionalized in the UNFCCC process. This access to international attention, expertise, and resources can give pro-climate actors an advantage in national political fights.

Finally, international climate finance will need to catch up with the shift from distributional to existential politics. While climate-related foreign aid from rich to poor countries can help (as promised under the Paris Agreement), the next step is ending fossil fuel subsidies worldwide – particularly those for coal. Rich countries need to get their own house in order. Although there are many different ways to construe what constitutes a subsidy, conservative estimates suggest that OECD nations spent roughly $150 billion on fossil fuel subsidies.4 Further, under the Belt and Road Initiative, Chinese policy banks and other public funds have supported billions more in fossil fuel infrastructure. The G20 agreed in 2009 that these subsidies should end. Phasing out subsidies should be billed as more than a technocratic fix to inefficient markets, but rather a rightful redistribution of wealth to workers.

Jessica Green is Associate Professor of Political Science at the University of Toronto.

Thomas Hale is Associate Professor of Global Public Policy at the Blavatnik School of Government, University of Oxford.

Jeff D. Colgan is the Richard Holbrooke Associate Professor in the Department of Political Science and Watson Institute for Public and International Affairs at Brown University.

The UN High-Level Political Forum on Sustainable Development: An orchestrator, more or less?