Book Review – China in the Global Political Economy: From Developmental to Entrepreneurial 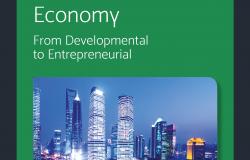 While the Sino-US trade war has finally become a reality in 2018, its origin a decade ago should never be forgotten. 2008 is a milestone for China in many senses, as quite a few important events happened: the global financial crisis, the Beijing Olympic Games, the 30th anniversary of the economic reform, among others. Afterwards, China’s economic power has been further strengthened and regarded as one of the biggest competitors to the US. Momentum has been gained considerably, while the economic growth model of China has silently shifted from labour-intensive to capital-intensive. In this revised global structure, China’s direct conflicts with the US unfolded after Donald Trump became the new US president, as his ‘America First’ policy and Chinese President Xi Jinping’s Belt and Road Initiative are, simply, strategically incompatible.

Gordon Cheung’s new book ‘China in the Global Political Economy - From Developmental to Entrepreneurial’ attempts to deconstruct the myths behind China’s rise by seeing China as a unique economy that is difficult for outsiders to intervene in, and highlights the shifting world economic and political order as the structural consequence developed after 2008. Six major topics are covered in the book, that are arguably the six pillars of China’s success from the author’s point of view: namely its economic paradigm shifts, the rise of soft power, political economy varieties, the effort to promote intellectual property rights, global financial competition, and the ‘going out’ policy.

Cheung first discusses the economic paradigm shifts from US to China, analysing the hegemonic decline of US global leadership in the world economy after the 2008 financial crisis, then continues on how China kept her economic growth despite the global economic decline. While praising the effort made by China on integrating neighbouring Southeast Asian countries to create greater economic value, Cheung notes the structural dependency that was initiated at the same time. This point of view differs significantly from the common Western viewpoint that China is controlling its neighbours via ‘debt diplomacy’.

As the second pillar of success, Cheung credits China for developing her soft power, in order to increase her global cultural influence. Unlike conventional critics calling it “sharp power”, Cheung acknowledges the relatively peaceful rise of China and sees it as a key to gain global acceptance. Confucianism, according to Cheung, played a particularly important role in shaping East Asia’s integration through highlighting the same traditional cultural values commonly shared in the region. Even though the definition of China’s soft power might be different from that given by Western academics like Joseph Nye, as the author argues, its effectiveness should not be cynically disregarded.

Third, and probably as the most important argument to make, Cheung looks into aspects of China’s political economy that have placed greater emphasis on knowledge and technological innovation in recent years. By developing high-end technology, China, as explained by Cheung, is now making full use of its demographic advantage to develop all kinds of new economies: smart cities, cashless e-commerce, blockchain community, and so on. Besides a national-level analysis on how China used the internet market as a weapon to gain economic success, Cheung also provides a regional analysis by looking into different areas, including the Pearl River Delta and Suzhou, that contributed significantly to the above economic model. Impressed by Chinese enterprises who are changing from the previous copycat, low-end orientation to the current innovative and high-end mode, Cheung eloquently links their successes to the future global power of China and sees such development as sufficient to settle the concurrent crises. This shift of focus from the ‘developmental model’ to the ‘entrepreneurial model’ in China’s economic transformation, as the author calls it, is an important dimension to understand the rise of China without being distracted by traditional ideological stereotypes.

Another major challenge is the increasing impact of China’s further integration into the global financial market. Believing that the opening up of markets can bring more benefits than drawbacks for the Chinese economy, Cheung suggests that the internationalization of the Renminbi is the next step for China to play more prominent roles in assuming global leadership. The ability of China to defend itself from external challenges in various global financial crises is seen as an endorsement of its authoritarian market economy model, which is actually on the rise globally and is shared by an increasing number of countries, whereas democratic ideals are now being systematically questioned. Finally, Cheung questions if the US could bring global equality and stability solely by her free market, liberal and democratic policy, and thus places high hopes on China’s ‘going out policy’ as a recipe to stabilize the global economy, while China’s apparent ‘no-strings-attached’, non-interference doctrine seems to be gaining preference among many developing countries.

To summarize, through providing in-depth analyses on Chinese political economic development from the past decade, Cheung’s book has added great value to the current academic debate on China’s transformative impact on the global economy. Supported with theory, empirical studies and first-hand sources from the author’s personal fieldwork, the book provides an excellent illustration of China’s secret of success and its corresponding limitations. As the structure that Cheung analyses is a farsighted, long-term one, the book is highly likely to remain relevant in the field even after the Trump - Xi presidencies.

Dr. Simon Shen is a founder of Glocal Learning Offices (GLOs), and Adjunct Associate Professor in the Faculty of Social Science at the Chinese University of Hong Kong.