Talking Migration and Refugees at Habitat III – What is Missing? 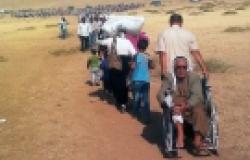 While there has been an acknowledgement at Habitat III of migration as a reality for cities, important parts of the global human mobility picture are being left out of the conversation.

Increasingly, economic, political and environmental push factors are encouraging (or forcing) people to move out of their home towns or cities and into cities elsewhere in search of asylum and/or economic opportunities. Once in the new city or its peripheries, however, refugees (and at times migrants) often end up living in poverty as they struggle to access jobs and basic services. Human mobility and displacement are therefore central to the broader global trends of rapid urbanisation and the urbanisation of poverty, both of which are becoming defining features of cities.

The Habitat III conversation on migration and refugees has largely been framed as a problem faced by European countries and one which is caused by an influx of displaced people from Africa (the whole of it apparently), Syria and Lebanon into the region. At the same time strategies for managing migration and refugees have been limited to prescriptions and toolkits for national and local governments on how to integrate international newcomers. While discussing best practice for integrating international refugee and migrant populations into European communities is important, other equally important realities of global migration and refugees are being ignored.

First of all, Europe is not the primary receptor of migrants and refugees. Instead cities all over the world are faced with the challenge and opportunity posed by both internal and international migration. According to the most recent IOM International Migration Report South-South migratory flows (particularly of women) are increasing relative to South-North flows and the majority of refugees, in particular, are hosted by countries in the Global South. Many countries in the African and the Middle East regions are receptors for as well as sources of migrants and, at times, refugees. In particular Gulf Cooperation Council countries in the Middle East have the highest number international migrants as a proportion of the host population globally.

Secondly, speakers across various sessions have called on media and governments to change the narrative on migration and refugees. They have emphasized that migration is an inevitable reality for cities – one that cannot be halted and one which should be embraced. This should be achieved by focussing on the positive social and economic contributions made by migrants and refugees, and implementing long-term strategies for their integration.

This change in narrative should be celebrated, but it is not enough. It ignores the reality of many governments that do not happily receive migrants and refugees. Loren Landau (African Centre for Migration and Society) pointed out in a session that it is not enough to say that governments should change their attitudes; constructive integration into the city and meeting the human rights of migrants and refugees must be incentivised.

Xenophobia in South Africa, Islamophobia in France and the United States, the support Donald Trump receives for his treatment of Mexicans and other foreigners, and the anti-foreigner sentiments embedded in the Brexit leave campaign all point to the obstacle to migrant and refugee integration posed by local population attitudes and actions. Implementing the New Urban Agenda’s mandate for inclusive cities necessitates a focus on changing the fear and othering based attitudes of receiving communities and their leaders. Loren Landau spoke about Xenophobia in South Africa and in an answer to a question on xenophobia Jill Helke spoke to the fear of difference as the cause of xenophobia. Beyond this I heard little mention of other forms of discrimination towards outsiders manifesting across the world and shaping political action.

Managing migration and refugees for sustainable urban development has largely been a Euro-centric conversation at Habitat III. This may be because of an over-representation of European panellists in comparison to representation from the Global South. European panellists are concerned with what they regard as a ‘migrant and refugee crisis’ for Europe. While understandable, this is not reflective of the global reality of migration and refugees. Human mobility patterns are changing and the global response to migrants and refugees is still largely shaped by expressions of xenophobia, Islamophobia, racism and other forms of discrimination.

Cara Mazetti Claassen (@Cara_Mazetti) is studying towards a Master’s in Cities and Global Development. Her focus at the conference is the New Urban Agenda's mandate for inclusive cities with regards to immigrants, migrants and refugees. In addition to this she will be exploring South Africa's new strategy for informal settlements, public spaces, and security in the city.