Between Two Epidemics: Coronavirus and Inequality in Brazil – A Conversation with GGF 2035 Fellow Felipe Oriá 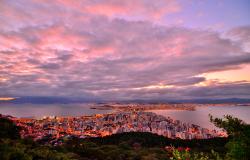 The COVID-19 pandemic is putting millions of Brazilian at risk of slipping back into poverty. At the same time, the country’s poor are struggling to cope as the government halves pandemic aid and food prices soar. How do you see the social and economic developments playing out in your country in the near-future?

Brazil's near future does not look bright. With over 5.7 million recorded infections and more than 163,000 deaths, Brazil ranks among the countries worst hit by COVID-19, behind only the United States and India. Inequality has risen in Brazil, which consistently ranks as the one of the most unequal countries in the world. Income inequality in Brazil has risen by 20% according to a study by the Getulio Vargas Foundation, mostly affecting the country’s poorest half. Coupled with rising unemployment, the COVID-19 pandemic has hit Brazil where it hurts the most – its capacity to productively integrate the country's poor in the formal economy.

How can Brazil overcome a sluggish economic recovery, a massive fiscal deficit and growing unemployment and inequality? It is hard to say. In most conceivable scenarios, Brazil's absolute poverty and inequality will increase in the short term. That is especially true considering that the Brazilian state has a net effect of increasing inequality. The tax and spending reforms which need to happen to change this reality take time and continue to lack political support.

At the moment, Brazil’s Federal Government is hampered by a budget ceiling aimed at limiting the already high-level of government spending and to fight inflation. Although the government is finding ways to support families with financial aid programs, all scenarios look grim. If the spending ceiling is lifted, inflation – which is already on the rise – will grow even faster, depleting savings and incomes. If the spending ceiling is sustained and financial aid programs reduced, the increase in absolute poverty (together with the rising inequality) will push Brazilians to their limit.

What are the biggest challenges facing vulnerable families in Brazil?

During the pandemic, the challenges for those in poverty in Brazil are too many to name. For one, Brazil’s poor struggle to attain comprehensive healthcare. Not only is access to care for those infected by COVID-19 divided across social class and economic lines, but the public healthcare system’s overall coping capacity has been greatly affected by the pandemic. Brazil's universal public health system has long been stretched thin. Further strain because of the pandemic means that healthcare professionals, resources and infrastructure were completely overtaken by the surge in demand. What we are witnessing now is insufficient care for COVID-19 patients and the suspension of preventive, chronic and emergency care in multiple other areas for those that depend on the public healthcare system.

Although Brazil's financial assistance program was enough to mitigate the immediate financial consequences of the Coronavirus, the uncertainty for additional financial assistance weighs heavily on those most vulnerable. Soaring unemployment and a drop in labor income, especially for the poor, has meant that the inclusion of the millions of Brazilians into the formal economy, guaranteeing them access to social protections and economic mobility is ever more distant. While the Federal Government's financial assistance program has helped many in need, it faces serious criticisms: the sustainability of such a program remains in question, and its existence brought about some of the highest inflation rates in the last decade.

Finally, I believe the impact of the coronavirus pandemic on Brazil’s education system will have negative consequences for a whole generation of students, and ultimately for the Brazilian society. Brazil has one of the world's highest wage premiums for each year of formal education after high-school. This is a consequence of the massive deficit of qualified professionals in the country, which, in turn, stems from the poor quality of its educational system. The disparities in the educational impact of COVID-19 are bound to deepen the country's inequality gap and affect its already-limited instruments of social mobility.

How are Brazilians dealing with the risk of infection and at the same time trying to make a living?

In the past months, Brazilians not only had to deal with many unknowns associated with the recent global pandemic, but they also had to contend with contradicting information coming from various levels of the government. While Brazil’s Federal Government chose to largely ignore COVID-19's health risks, state governments and municipalities implemented severe restrictions on mobility and economic activity. In practice, this duality meant that poorer people ended up feeling both the larger economic consequences and a higher risk of contamination. Together with the lacking access to healthcare, this has led to a higher economic and health impact on vulnerable populations. A study from PUC-Rio quantified some of these impacts. According to the study, among cohorts of severely affected individuals, 55% of Black and Brown Brazilians who contracted COVID-19 died from complications, compared to only 38% of white people. Another example is seen in people with no formal education, who experienced death rates up to three times higher (71.3%) than those that were college educated (22.5%). Such disparities show Brazil's deep-rooted inequality: when taking education level and race together, the death rate of uneducated, Black Brazilians is as high as 80.35%, whereas college-educated, white people experience death rates as low as 19.65%.

What should the Brazilian government and society do to prevent the country’s most vulnerable from falling back into poverty during the pandemic?

Brazil's inequalities have a long history, and are deeply-rooted into the society. The pandemic did not create any new sources of inequality, but rather put a spotlight on the extreme divide in Brazil's social and economic life. As an optimist, one can only hope that this serves as a trigger for structural reforms – both in tax policy as well as in the major sources of public spending, both of which promote inequality. Only by reversing the Brazilian government's current net effect of increasing, instead of reducing, inequality can we hope to make meaningful progress toward a more just and prosperous country.

Looking at the short-term, while structural reforms seem unrealistic, there are several other budgetary arrangements that Brazil’s Federal Government could implement to transform the existing Coronavirus emergency relief program into a permanent policy on universal basic income. Coupled with structural actions that anticipate the challenges of a post-COVID world, especially those tied to education and digital inclusion, we can hope to make the best of this global catastrophe.

Felipe Oriá is a co-founder of Movimento Acredito and a fellow of the Global Governance Futures – Robert Bosch Foundation Multilateral Dialogues program. All views are the author's only and do not represent any of the institutions to which he is associated.