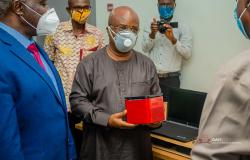 The efficacy of governance varies across West Africa, as does the region’s record in tackling the spread of the coronavirus. There are clear signs that good governance can boost a country’s ability to deal with the pandemic and its fallout.

West African countries have defied the worst-case Covid-19 scenarios contrary to expectations and their weak healthcare systems. Countries across the region have all experienced similar public health and economic challenges due to the pandemic but have adopted markedly different responses.

Governments which efficiently use their assets, create policies and tackle corruption will, of course, be better positioned to steer their nations in normal times. But how do these traits sway their chances of dealing with a once-in-a-generation crisis like the current pandemic?

The Bertelsmann Stiftung’s Transformation Index (BTI) ranks 137 developing countries on governance, specifying that successful governance implies a government consistently pursues goals, uses resources wisely and eﬀectively and is willing and able to include all relevant stakeholders in policy-making. Among West African countries, Senegal and Ghana top the list with ‘good’ governance ratings, earning an overall ranking of 12th and 18th positions respectively. Senegal, stands out for its steering capability and willingness to cooperate with regional and international institutions and actors, and Ghana is home to the most advanced political and economic transformation in the region. At the other end of the spectrum, Nigeria and Mauritania are at the bottom of the regional list with ‘weak’ governance ratings and overall ranks of 96th and 98th.

Surveying the region, Senegal and Ghana have, so far, demonstrated stronger Covid-19 responses than weakly governed ones like Nigeria and Mauritania. In fact, Senegal and Ghana were ranked among the countries with the best Covid-19 responses by the US-based Foreign Policy (FP) magazine. The two countries had high scores for their public health directives and perfect scores for ensuring fact-based communications.

Testament to a strong communication strategy in fighting the pandemic, Ghana’s president, Nana Akufo-Addo, has delivered 21 televised broadcasts since the country’s first case, providing clear information on the virus, the government’s response, and citizens’ responsibilities. Compare that with Nigeria’s President Muhammadu Buhari who has only addressed Nigerians thrice. In contrast to this erratic strategy, Senegal kept the public informed about the evolution of the epidemic through the media, religious groups, village and community leaders, and other channels.

The country’s early response made up for weaknesses in the health sector: starting in March with the detection of the first cases, Senegal deployed mobile testing units and established a contact tracing system. By April, face masks were mandatory in public places. Senegal was hit particularly hard by the outbreak of the Ebola crisis during 2013-2016 and had learned its lessons.

It is well known that higher levels of Covid-19 testing ensure an early diagnosis, which helps prevent spread of the virus, thus saving lives. At present, testing is inadequate in all four countries, but Nigeria lags them all. According to Our World in Data, a UK-based project, Nigeria tests only 6.2 people for every 1,000, while Senegal tests 19.5, Ghana tests 24.0 and Mauritania tests 39.5.

Corruption, a key consideration in analyzing the quality of governance, has shown up in the distribution of Covid-19 relief, especially in Nigeria and Mauritania. A recent report by Freedom House, a watchdog organization which defends democracy, highlighted that in Mauritania, “the ministers of the ruling party used COVID funds to make donations on behalf of the prime minister.” Some Nigerians stormed government warehouses and homes of several ruling party politicians in October, looting food items that were intended for distribution as Covid-19 aid but were allegedly being hoarded. One lawmaker whose home was raided by the looters claimed that he planned to share the palliatives on his birthday. Corruption in one area breeds general distrust, which makes it hard for populations to maintain their faith in the government’s messaging and guidelines in other areas.

Restrictions like wearing masks and social distancing are necessary to beat the virus and save lives, but make day-to-day life hard for the general population. Protests against restrictions have forced some governments to change track. Ghana issued a mandate last June making wearing of face masks compulsory in public. Citizens initially complied but became lax despite a second coronavirus wave. Ghana’s government, unwilling to be complacent, has been enforcing the mandate and making arrests. Senegal adapted to riots that broke out in June by easing some of the restrictions but the Health Emergency Operations Center continued with its policy of transparency and openness in communicating with the public and raising awareness .

On the other hand, in Nigeria state governors sent a letter to President Buhari requesting a mask mandate back in April 2020. Some had begun to enforce mask-wearing locally, but they believed that a nationwide mandate would ensure a “uniform and coordinated policy”. The central government did not heed that call until January 2021, nine months later, when the president finally signed such a regulation.

These points do not conclusively make the case for positive links between good governance and good Covid-19 responses. After all, analyzing just four countries makes for a small sample. Meanwhile, the pandemic is ongoing and other variables have an influence, meaning that one of today’s high-performing governments may suddenly fumble, and vice versa.

That said, there does appear to be a correlation between good governance and effective responses. Ghana and Senegal have dealt with the pandemic with more success than Mauritania and Nigeria. This shows that good governance matters and could make the difference between hundreds or thousands more deaths, between palliatives being hoarded or reaching intended beneficiaries, and between an economic freefall or a recovery. More than ever before, citizens of these countries need to fight for, build the institutions, and elect the leaderships that deliver good governance for all.

Stanley Azuakola is the Founder and Executive Director of Civic Monitor, a non-profit that works to facilitate a more engaged and informed citizenry in Africa. He writes for the Bertelsmann Stiftung’s BTI Blog.

Can Basic Income Schemes Take the Pinch out of the Corona Crisis?