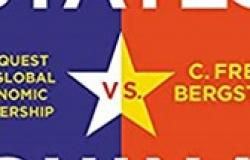 Although Fred Bergsten’s book is titled The United States vs China, his analysis and recommendations suggest that such a contest would threaten not only the global economic order, but also world peace. Instead of a fruitless and damaging struggle for dominance, Bergsten proposes what he terms “conditional competitive cooperation” between the two protagonists. Aside from the alliteration, the term is a clumsy one. At its essence is the case for global systemic cooperation between the two most powerful economic and political powers on earth. Indeed, the most interesting and analytical part of the book is Part III “The Systemic Alternatives”, in which he examines, successively, a global situation without any single leadership role being filled, a G-0 World; a G-1 World, with Chinese economic pre-eminence; and a global situation where there is effective co-leadership: a US-China G-2 World, which would attempt to achieve conditional competitive cooperation as its underpinning ethos. This third option, preferred by Bergsten, is perhaps better defined as a G-2 plus structure, involving the US, China, and other significant countries (effectively the G20 membership). 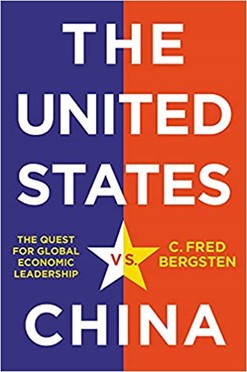 The second of the above propositions - which Bergsten considers implausible - indicates a fundamental weakness in Bergsten’s approach to an admittedly real and disquieting global concern for the future. I should confirm that he also dismisses the G-0 alternative proposition. We will below look at his analyses of all three propositions, but it is concern with the undue emphasis on economics, common to all three of the options, where a major fault-line in his analysis is demonstrated. It should be said that I strongly support his attempt to provide a prescription for achieving global governance. I also applaud his attempt to look objectively at the US-China situation from an equidistant standpoint. However, as suggested below, the position he adopts will ultimately fail to achieve his objective.

The first part of the book is primarily discursive and sets the scene for the following economic and systemic analyses. It summarises the historical rise of the US since the post-1945 period when, having been reluctant to take over global (essentially Western) leadership from a declining Britain in the 1930s, it began to assume a pivotal role, in the economic reconstruction of Europe, including the UK. In the Bretton Woods conference the US, with support from the UK (though Keynes’ ideas on an international clearing union were rejected), established a new international trade and monetary system, though clearly one in the interests of the US. Interestingly, and uncritically, he characterises the British global reign in the 19th century and the US global reign in the 20th century as “benign hegemonies.”

Bergsten traces the ensuing decades, including the substantial disruption introduced by Nixon’s abandonment of the convertibility of dollars to gold. This decision, initiating the dollar as the principal global reserve currency, plus imposing a 10% surcharge on imports into the US, led to problems throughout the 1970s. Bergsten argues that the acme of the US global economic ascendancy ran from 1980 to 1995 - “suppressing” the economic rise of Japan during that period (though Bergsten doesn’t acknowledge this) - and has been in a gradual economic decline since then, currently in the process of being overtaken by China.

During this account, Bergsten states his favoured US explanation of China’s rapid trade growth, dating from a year or so after its accession to the WTO in 2001 to 2013, as due to China’s “currency manipulation”. Leaving aside the fact that the terms on which China, as a developing country, entered the WTO were more onerous than any other similar developing country (Garten 2001), this explanation is problematic. Throughout the period from 2005 to 2013, China’s currency the Yuan appreciated by 42%, monitored by frequent meetings between US and Chinese trade officials during that period. Moreover, exchange rates are related to a country’s macro-economic policies. Accusations of intentional currency manipulation are impossible to prove.

On the record of global leadership of the US and China over the past 25 years, Bergsten’s assessment is that, the Trump years apart (a large caveat), the US has sought to maintain the liberal international trading system, whereas China’s practices of forced technology transfers, intellectual property theft, cyberespionage, and subsidies for state-owned enterprises eroded trust in the global trading system. We might question whether several of these alleged practices are not also engaged in by the US. Bergsten does however credit China with having shared the role of stabilising the financial system during periodic financial crises, including the GFC. I would have liked more from Bergsten on the fragile global financial system and the US.

The second part of the book contains a useful comparative analysis of the two countries with some interesting charts and tables, illustrating some key significant difference between the two economies in a global context. This section is a valuable research source for academics.

Returning to the point made earlier, and Part 3 of the book, Bergsten’s approach is strongly focused on economic relationships and economic leadership; the problem is that the actual topic should be political economy. One cannot, in assessing the issue of global leadership, do what Bergsten suggests, that is to put on one side “security issues and values”. In practice, Bergsten does not do this himself, certainly not on the issue of values, but neither does he deal adequately with the deeper political and philosophical issues raised.

This avoidance of analytical depth in these intellectual areas weaken the thrust and rigour of the book’s overall message, that cooperation is preferable to conflict.  Moving forward to a new global order, without a deeper understanding, and acknowledgement, of the underlying clash of values is likely to fail.

The conflict between the US (and the West in general, though with shades of opinion) and China (and much of the East, though also with shades of opinion) has an ideological component that cannot be ignored. The only way to understand this fundamental difference of approach: to democracy, to human rights, to the rule of law, and to philosophy is to view the issues, in depth, from the Chinese perspective. Bergsten attempts to assess the issues from that of an objective observer, stationed above the conflict. Hence, he suggests that China does not support “political democracy” and that they support “hierarchy” as opposed to “democracy”. This is misleading. China has what can properly be described as hierarchical democracy, supported by both elections and the use of extensive public opinion polling to ensure that the governance at all levels is in line with public opinion (or what in CCP parlance is termed the “mass line”). China has a de facto federal governance structure, involving state decision-making institutions as well as CCP governance structures, and operates within a legal structure.

There is a demonstrable gulf in Bergsten’s understanding of how China actually works in political terms. This is a common position that drives the general Western ideological opposition to what is simplistically called “authoritarianism”, practised also by Western countries as demonstrated by some draconian Covid19 measures taken in the US and elsewhere.  Even on the issue of human rights, there is a misunderstanding: with the Western version stressing individual rights, and the Chinese and Eastern version of rights stressing collective rights.

Notwithstanding these criticisms, Bergsten’s book is a valuable US contribution to the voluminous literature on the US-China relationship. He is critical of the dysfunctional elements in the US in relation to its global leadership role and points also to dysfunctional aspects of China’s behaviour. He argues, correctly, that both behemoths need to cooperate strategically, and closely, if stable global governance is to be achieved over the next three decades and beyond.

Dr Michael Lloyd is Associate Director of the Global Policy Institute, and co-author of the recently published book The Re-Emergence of China: The New Global Era (World Scientific, 2021).