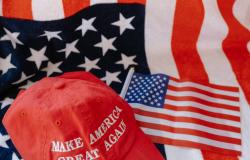 Scott Montgomery argues that whether Trump runs in 2024 or is replaced, the Trump era is unlikely to end anytime soon.

We in the U.S. are being urged to believe that the country was saved, in no minor way, by the Midterm Elections of 2022. A week later, that is, we are still here. Many quiet transfers of power at a local level are presumed to add up to a very big and loud win for democracy. A few arrests, some poll watcher irregularities, yes, but no gun fights, no repeats of January 6 at state houses and city halls, no outbreak of civil war.

Though they won the House, Republicans lost the Senate, and so are powerless to alter the direction of the country in any major way. Compared to what they hoped for, they have been, in the mortal words of one commentator, “declawed.” Even the President, Joe Biden, publicly agrees. He flew to Bali, where he met face-to-face with Xi Jinping for the first (and perhaps last) time. There were said to be “blunt” talks: curt handshakes, thin smiles, thinner promises.

Meanwhile, claws or no, the GOP will be sharpening halberds. Its task for the next two years will be guardianship, i.e. active and disciplined stagnation. Owning the House, even by a handful of votes, and just under half the Senate are enough—with party discipline—to block, choke, and shut-down any further forward movement by “the other side” over the next two years, on such topics as climate change, gun control, healthcare, inflation, and more.

Then there is the proclaimed intent of Republicans to launch investigations: of Biden’s son, Hunter (“influence peddling”), the “disaster” at the U.S.-Mexican border, and against Anthony Fauci, director of the National Institute of Allergy and Infectious Diseases, who led the government’s response to Covid-19 with unrestrained temerity in refusing to endorse Donald Trump’s pushing of snake oil cures. Getting up on stage to sell fake medicines, after all, has a hallowed history in America that perfectly suits Mr. Trump’s talents.

Still, it doesn’t seem entirely admirable that many millions of taxpayer dollars will go to investigations whose real purpose is legislative coma. But, then, starting in the Obama Administration, this has been a GOP tradition. More worrisome, though, is the possibility that U.S. aid to Ukraine in its ongoing war with Russia will be greatly reduced or even blocked altogether. This has been threatened by House Minority Leader, Kevin McCarthy, who will be elevated to Speaker next year, a powerful position.

In short, democracy may have worked in the Midterms, but it’s not clear that it makes any difference. More than half of those who embraced Trump’s Big Lie (2016 election was “stolen”) gained reelected. Pretty much all of the GOP’s worst, from Mr. Grassley in Iowa (now 89) to Mr. Gaetz in Florida, were among them. Above all, roughly 50% of U.S. voters continue to democratically support the party of anti-democracy and illiberal madness.

The icing here is Trump’s announcement that he is again running for president. “I shall return,” he says, or more accurately, “America’s comback begins now!” Can he win? Is this possible? Those who say “no” should recall the first 9 months of 2016, a time of similar false and innocent certainties.

There are two years available for Trump to set everything on fire again. There will be a new period of ‘love-love-me-do’ rallies, outrageous lies, rambling jeremiads, and much more. There will be words of horror (rightly so) for how he might handle the crisis in Ukraine, the rebuilding of that country, the sanctions against Russia. Plenty of time for fire to consume all the media oxygen.

Moreover, Trump still has potent command over the Republican Party. Those who have pretended to disaffect themselves from him are now in the swamp again, just as they were when they showed horror at the Jan. 6 insurrection, before falling back in line. He retains considerable, rooted loyalty from voters on the far-right. Those who voted Republican in the Midterms because they couldn’t bring themselves to support Democrats are unlikely to suddenly embrace them.

One question now being asked is whether the GOP would support Trump’s candidacy if they have other candidates that seem more electable. We do know that no matter how much they may fear or despise another Trump presidency, Republican leaders would become his zombies if he seemed the front-runner.

While there is much talk about Florida Governor, Ron DeSantis, he remains untested at the national level. He is known to be socially awkward and is no match for Trump’s fluid brawl in public speaking. A king in the Sunshine State, DeSantis is likely a pawn in more than a few others. He has learned, however, that being a mean jerk is good politics in GOP-land. Sending migrants from Texas to Cape Cod, lying to them about jobs and housing, then just dropping them there like refuse (translation: “Here, liberals, you deal with it”), is just the sort of thing Trump might suggest or do. It’s also exactly what another possible 2024 Republican candidate, Greg Abbot, governor of Texas, has done, sending busloads of migrants to New York City. It seems to be a new qualification for presidential stature on the right.

There are so many things better than this that America needs in order to avoid further illiberal decay. Simply claiming that the “Trump Era is Over!” won’t make it so. Whether DeSantis or someone like him is smarter, more knowledgeable, better organized, etc. only means that they will likely be more effective at doing more damage, ruining the country’s chances of returning to a more liberal democratic place. Such candidates, that is, are not an alternative to Trump, but instead alternative versions of him.

Of course, hope does re-seed itself. Much of the next two years will be a waiting game, as Congress likely ceases to function as a true legislative body. Then, there will be another chance.