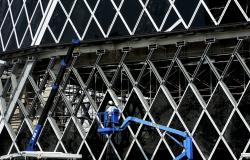 Tristan Kenderdine examines the growing dependency of global industrial output on Chinese policy and the risks this holds for a global trade perspective.

Ahead of the Astana Economic Forum in May, Kazakhstan will be looking to showcase its integration with the global economy and tout its attractiveness for global investment. Yet the reality of Kazakhstan’s international trade and investment policy will be dominated by the twin pins of China’s geoeconomic strategy and its continuing symbiotic economic relationship with Russia. And for the United States, the introduction of short-term exchange rate volatility via renewed Russian sanctions pushes Kazakhstan further towards China rather than pulling it into the global economy. Poor policy integration from the US, means that its Russian sanction policy is having spillover effects on Kazakhstan, while China’s state policy finance architecture is standing ready to offer decade-length strategic investment in industrials.

Kazakhstan was hit in April 2018 with exchange rate volatility in a proxy effect from the US targeted weakening of the Russian ruble. The ruble lost 10 percent in value against the US dollar in the week following the introduction of sanctions, and as a result the tenge weakened 3 percent over the same week and 1.8 percent in the two days 9-10 April alone. This falling tenge prompted central government ministries and the National Bank of Kazakhstan to draft an emergency government response plan.

Central bank officials have been in fire-fighting mode. Daniyar Akishev, director of the National Bank of Kazakhstan, reminded the population that it was normal for a floating tenge to go through weakening and strengthening cycles, and advised the government not to take any defensive monetary policy decisions. Alpysbai Akhmetov, vice director of the National Bank of Kazakhstan, reaffirmed that the recent mini devaluation had simply been market deviation, and that the national bank would not engage in active foreign exchange interventions. While Timur Suleimenov, Minister of National Economy, said that Kazakhstan would consider short-term trade and investment policy options rather than interventionist monetary policy.

Kazakhstan introduced a free-floating exchange rate regime for the tenge in August 2015 after having to weaken the national currency by 19 percent in 2014 to align the US exchange rate to Kazakhstan’s ruble peg. Soon after floating, the tenge lost a further 40 percent in a move that devastated many working people, as real estate is routinely negotiated in US dollars. Kazakhs are wary of a repeat of the devaluations, and it will be a hard sell to reassure the public that the latest exchange rate volatility tied to the ruble is market-driven rather than state-directed currency devaluation.

While Russia ruble sanctions hit the Kazakhstan tenge by proxy, China’s industrial transfer policy finance offers a long-term stability to finance economic development. Kazakhstan has benefited from clearer policy transmission from China than many other economies on the Belt and Road geoindustrial policy. This latest threat to the tenge comes as Kazakh Invest released a list of 658 industrial investment projects for 2018-2020 to better align with China’s investment in the Kazakh leg of the Belt and Road.

China’s geoindustrial macrostrategy to transfer industrial capacity to external geographies in Central Asia is becoming increasingly clear. China’s domestic factory closures under the Supply-side Reform policy is forcing Chinese State-owned Enterprises to relocate abroad. This is guided by with soft policy bank loans to help them ease into external geographies, are guided by government policy to match certain provinces with certain Central Asian states to push outward direct investment in targeted industries. China’s industrial transfer financing policy for Kazakhstan centres on Hebei province in a financing system known as ‘One Province, One Country’.

At an International Capacity Cooperation conference in Astana in August last year, China’s Hebei sent provincial representatives of the Development and Reform Commission, Department of Commerce, and Department of Agriculture to meet with Kazakh officials and leaders of China’s enterprises to discuss deepening International Capacity Cooperation. This followed a meeting in Beijing in May which saw Hebei province pledge to focus on four areas of exporting factory capacity in steel, cement, glass, and photovoltaic cells as well as equipment manufacturing.

The pattern of one Chinese province being paired with one sovereign state is normal for the unfolding industrial transfer policy. Not only is Hebei province paired with Kazakhstan, Jilin province is matched with Russia, Henan with Uzbekistan, Guangdong with Pakistan, and Shanxi to Indonesia. This administrative matchmaking is then paired with access to preferential policy funding and guided by international industrial associations by sector. For example Jilin to Russia in agriculture, rail transport, and finance; Shanxi to Indonesia in nickel smelting, energy equipment and transport equipment.

The Hebei-Kazakhstan pairing focuses on aluminium, glass, cement, logistics and warehousing, pharmaceuticals, and agroindustrial machinery. Hebei province, due to be merged with Beijing and Tianjin into the Jingjinji super-province, is the most concentrated steel production complex on the planet. As the centre of China’s coal-steel industrial complex and its peripheral industries, Hebei is to be the hardest hit of any provincial governments by the central government’s plans to curb excess factory capacity in traditional polluting industries. Enterprises and projects that have already begun transferring abroad include the Astana Industrial Park Phase II project, a joint venture between Xingtai Road and Bridge Construction Corporation and Astana City Investment and Development Bureau; USD 200 million to establish industrial parks in North Kazakhstan’s Petropavlovsk; JA Solar Holdings photovoltaic energy generation; and China Glass Holding’s move to take over a 600 ton a day floating glass production line. Eurasian Natural Resources Corporation Logistics has also established a cross-border e-commerce, warehousing and logistics deal with Hebei Good Hope Logistics Development.

Kazakhstan’s national level economic planning is designed to utilise Chinese capital to leverage a ‘third modernisation’ into an open economic model. Policies such as the Kazakhstan 2050 Strategy, for long term post-hydrocarbon economic development, the USD9 billion Nurly Zhol (Bright Path) critical infrastructure investment plan to dock with China's Belt and Road transcontinental transport and logistics policy, and the Kazakhstan Industrial Innovation Development 2015-2019 short-term secondary industrial promotion strategy all exude an independent industrial strategy open to foreign investment. And the Russian Federation remains Kazakhstan's largest trading partner, with the countries tied together in the EEU customs union and sharing a high degree of economic complementarity. This means neither Moscow nor Astana have any need to fear Chinese industrial investment in Kazakhstan.

But Washington is now flirting with a geofinancial risk that it is unprepared to back. US destabilising the ruble risks pushing regional economies striving for greater integration with the global economy instead towards a ruble-yuan pact or a petro-yuan. And for recipient countries, China’s closed capital account and unaudited state banking credit system means that investments in Kazakhstan carry with them an inherent financial risk tied to China’s banking system. Suffering from a period of policy malaise, Washington is seeing decades of careful policy architecture in Central Asia being flattened with the broad, boorish strokes of sanctions and tariffs. Global trade calculus is more complicated than Washington can plan for, and in a battle of steel and aluminium, Kazakhstan will be happy to soak up China’s excess capacity in both. The longer-term risk for the global trade perspective though is world-wide aggregate industrial output’s growing dependency on Chinese policy bank capital.

For the United States, targeting the ruble hurts more than just Russia, and US foreign policy credibility in Central Asia is naturally taking a hit. For Kazakhstan, used to balancing geopolitical power, the rhetoric of global economic convergence may soon be muffled by the hard reality of rubles and yuan. Regardless of the Kazakhstan government’s response to the short-term attack on the tenge, Kazakhstan’s long-term investment strategy is banking on China.