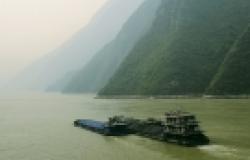 Just as China’s domestic thermal coal burning affects global climate, its non-fossil fuel policy shapes global environmental policy. Over the past two years there has been a monumental shift in China’s energy policy towards nuclear. And the expansion of the inland nuclear network is slated for the Yangtze River, from Sichuan all along the river’s course to the nuclear hub in Zhejiang. China’s civil nuclear expansion also focuses on offshoring production of energy equipment to external geographies, meaning more affordable nuclear plants for developing countries. Coupled with Chinese investment in cement, expect a flowering of civil nuclear plants along the rivers of Africa, South America, and the Middle East.

The western environmental and energy policy communities have long berated China for its continuing reliance on thermal coal, the lifeblood of its industrial economy, which has lifted hundreds of millions out of poverty. However, China’s commitment to the expansion of renewables has been extraordinary. Solar energy only became a solution in most OECD economies in 2013, once China had poured into the market and made cells affordable. A similar story occurred in 2016 with batteries for NEVs (new energy vehicles), as the electric car only became a reality once Chinese components manufacturers were able to produce cheaply enough to create an economy of scale.

China nearly doubled its nuclear generated electricity output between 2013 and 2016. The central Chinese government has made it clear that it is serious about ramping up its civil nuclear electricity production. From the 36 current reactors, China has 63 reactors under construction. 96 are slated to begin construction by 2020, and a further 79 are to be completed by 2030. This would take China’s operating capacity from 32,637 megawatt electrical (MWe) in 2017, to a massive 302,783 in 2030.

If China is serious about nuclear, then the spill over effects of cheap energy equipment manufacturing will push peripheral countries into China’s nuclear orbit. Energy equipment capacity cooperation is already a staple of China’s external industrial policy. And countries such as Saudi Arabia and Iran are already in line to benefit from cheap Chinese electricity generating energy equipment. The effect on global productivity and living standards would be dramatic if Africa, Southeast Asia, the Middle East, and Central Asia had access to the cheap, abundant, and reliable electricity that Chinese energy equipment would bring. According to Xie Zhenhua, China’s global energy policy envoy, China intends to extend inland nuclear in order to meet its COP21 commitments.  However, in order to extend the economic prosperity that cheap electricity brings, China will need to break technological and regional governance barriers to ensure the safe operation of inland nuclear power plants.

Beijing has released plans for a sizeable network of inland plants, mostly concentrated in central China along the Yangtze. Hubei and Hunan will be home to the most reactors outside the coast, with plans also for Jiangxi, Anhui, Henan, Sichuan, Chongqing, Guizhou and northern Guangdong. The principal problem facing inland nuclear is the high water demand of reactors — hence locating them along the Yangtze, which provides an inland water source. Traditional coastal nuclear powerhouses Guangdong and Zhejiang will massively ramp up capacity too. Guangdong is to get nine new nuclear sites with 28 reactors totalling 36,000 MWe. Zhejiang will add 15,000 megawatts (MW) to its existing 6,141 to remain the heartbeat of the Yangtze Delta. And the Bohai Bay industrial cluster of Liaoning-Hebei-Shandong is to become the third coastal civil nuclear hub, with Shandong moving from no nuclear presence to over 20,000 MW.

China plans to construct an additional 26 plants to reach a total of 56 plants by 2020, to become the world’s second largest nuclear country. Equipment manufacturing is currently dominated by Shanghai Electric, Dongfang Electric Cooperation, and China First Heavy Industries, whose production capacity can meet the demand of 12 to 15 plants per year.

Internationally, exports of China’s domestic Hualong 1 and CAP1400 nuclear reactors to Belt and Road economies are designed to replicate the export-oriented development policies of economies like Germany, Japan, and Korea. The economic value of nuclear power plants has much the same industrial complementarity effects as the automotive industry or the high-speed rail manufacturing cluster. A single nuclear plant generates approximately C¥30 bn in economic output value, the export equivalent of 300,000 cars.  China has successfully exported eight nuclear power units to seven countries, and has established talks with more than 40 countries. However, cooperation with developed economies in civil nuclear power likely has geopolitical strings attached. Could France or England oppose transfer of civil nuclear technologies to Iran or Egypt if they had themselves been beneficiaries?

There is obvious opposition to inland nuclear centers on environmental and nuclear safety issues, particularly given China’s infamous inability to connect investment in electricity generation with regional electricity grids. Currently, coal-burning provinces send electricity to the coast, so they are paying the environmental dividend for the coast’s economic development. Chinese provincial governments have recently been paying out a double dividend: once for polluting air pollution through thermal coal, and once again through the cost of investing in photovoltaic and wind capacity which has sat unused, curtailing the grid. Nevertheless, China aims to finish transitioning from a large to a strong nuclear country emphasising high safety levels. During the 13th 5-year plan period, the forthcoming Nuclear Safety Law will address safety and legal gaps in the 2003 Radioactive Pollution Prevention and Control Law.

If China’s policy to export its civil nuclear program is to be successful it must first demonstrate industrial and environmental policy coordination at home. The new inland nuclear program could bring river-based civil nuclear generated electricity to new areas of Africa and South America. If China intends to sell nuclear equipment to external geographies, it must understand the technological and safety risk in its own backyard, and ensure that its technology is dependable and that it promotes effective safety protocols and standards alongside its energy equipment exports. A domestic nuclear accident coinciding with a flood of the Yangtze river could be catastrophic. For civil nuclear to solve China’s environment policy woes, it must be policy-complete enough not to export environmental risk to the Middle East, Africa, South America, or Eurasia.