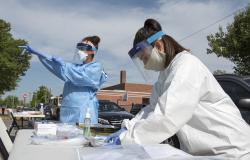 In the race against time to vanquish the COVID-19 pandemic, the debate has focused on the tradeoff between lives and livelihoods instead of the most viable way to return to normalcy. An obvious viable solution would be the development of a vaccine or a cure, but it could remain elusive for a long time. The current “whack-a-mole” strategies have left many parts of the globe isolated and vulnerable with a risk of re-transmitting the virus across borders, regions, or cities. The pandemic requires a global solution.

A small but growing chorus of voices has been promoting large-scale testing as an effective way to vanquish the pandemic, but it has not gained traction because it is has been considered “infeasible.” Indeed, the sheer number of tests needed compared to current production in each country and the difficulty of scaling up collecting and processing samples could suggest that this task is impossible. Huge shortages of ventilators and personal protective equipment across the world, including in many advanced economies, seem to confirm this view.

A recent IMF working paper argues that a universal testing and isolation policy is the most viable way to squash the pandemic quickly, on a global scale, and without undue restrictions on the lives of many. The perception of “infeasibility” of universal testing stems from the adoption of a clinical approach to testing and “laissez faire” approach to production. To implement this policy, policymakers must change their perspective: (i) by adopting an epidemiological approach to testing, sacrificing accuracy (sensitivity and specificity) for scalability, convenience, and speed; and (ii) by tackling market failures to ramp up production quickly since the market would fail to provide the tests needed.

The aim of an epidemiological approach to testing is to regularly identify (and isolate) enough infected individuals rather than provide a precise clinical diagnosis. Rapid tests for antibodies developed during infection (IgM) or antigens, which are similar to pregnancy tests, or Point-of-Care molecular or antigen tests could be good candidates to reach a large share of the population. In addition, symptom-based “tests” such as temperature measurement could help lessen the number of tests needed especially during the transition to widespread testing albeit with a risk of large false positives.  This contrasts with the widespread directives to only test symptomatic individuals.

A combination of epidemiological testing, “smart” strategies such as group (pooling individual samples for testing) and periodic testing (using blocks of population by a geographic grid), and some mobility restrictions to the hub or city center, transforming “monocentric” cities into “urban villages,” would limit the number of tests needed the squash the pandemic to 5-10 percent of the population per day. In addition, with symptom-based “tests,” the number of tests needed could be reduced below 5 percent of population a day. We argue that testing on this scale is feasible and cost effective with the returns dwarfing the costs of the lockdown. At current costs, the direct return on investment in universal testing would be at minimum a staggering 1000 percent.

Countries that have used large-scale testing have slowed the epidemic substantially. For instance, in Italy, the region of Veneto achieved a much slower progression of the epidemic mostly due to its large-scale testing and isolation, including asymptomatic people, than Lombardy did. China has tested the whole populations of the cities of Wuhan and Qingdao to contain outbreaks.

The market failures precluding an unprecedented increase in production in a short period of time at the global level would require a state intervention strategy along the lines of a True Industrial Policy (TIP). A strategy of such an intervention—industrial policy for the pandemic—could be implemented successfully in developing countries as well. It amounts to solving market failures effectively and fast. TIP’s key principles such as creating capabilities in sophisticated products with competition (domestic and international) and accountability for the support received are even more important in developing countries.

Because the ramp up of production must be done fast, organization and coordination of resources would be key to success. Public and private resources need be directed to the production of the necessary medical products for testing along the whole value chain; knowledge needs to be shared and risks assumed by the state; and manufacturing facilities need to be redesigned or built from scratch quickly. Resources need to be pooled to achieve economies of scale and international institutions could help developing countries achieve this objective.

The global community needs to decide to which era its fight against the COVID-19 pandemic belongs. Lockdowns are medieval, vaccines are a legacy of the Victorian period while tests stem from a technology developed in modern times. Building a testing infrastructure is not only a viable way out of this pandemic but also a protection against future pandemics that the world would most likely face again.

Reda Cherif is Senior Economist at the IMF.

Fuad Hasanov is Senior Economist at the IMF and Adjunct Professor of Economics at Georgetown University.

Min Zhu is a former Deputy Managing Director of the International Monetary Fund and is Chair of the National Institute of Financial Research at Tsinghua University, China.

The views expressed are those of the authors and do not necessarily represent the views of the institutions with which they are affiliated.

COVID-19 as a ‘Critical Juncture’: A Scoping Review