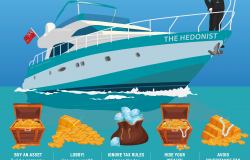 Max Lawson introduces Oxfam’s 2023 Davos report, ‘Survival of the Richest: How we must tax the super-rich now to fight inequality’

Walter is the father of my son’s best friend at school. He works nights as a security guard at a bank in the City of London. He has three kids. They are really struggling, as the prices of everything – gas, electricity, food have all increased dramatically. Where £20 would buy enough electricity for a week, it now lasts just a couple of days. 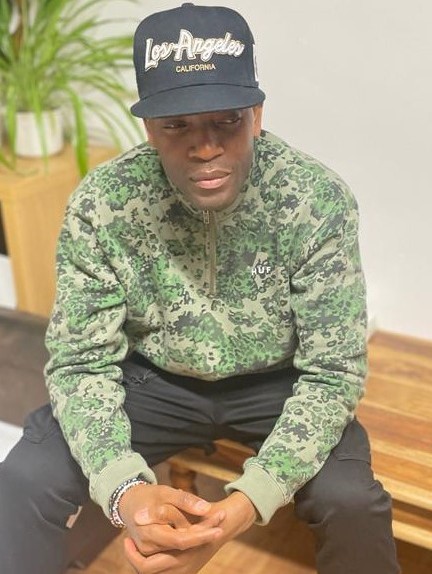 But Walter, whose family come from Sierra Leone, and who returned there recently for his mum’s funeral, counts himself lucky: “I think of all those back home with literally nothing.  No job, no money coming in, and prices just going up and up.  It is terrible.”

In all the years I have worked for Oxfam, I have never seen such a combination of terrible crises impact so hard on ordinary people all over the world.  First COVID-19, and now the cost-of-living crisis, coming on top of years of rising inequality and climate breakdown, have driven up the numbers of people living in poverty for the first time in 25 years.  Inequality between the rich world and the rest of the world has seen the largest rise since World War 2. Nearly one in eight people are going to bed hungry.

The richest 1% are capturing the wealth the whole world creates…

It is against this dramatic backdrop of crisis and suffering that we are launching our annual report on inequality, as billionaires and world leaders once again make the trip to the mountain top in Switzerland for the Davos World Economic Forum.

Over the last decade, the richest one percent captured about half of all new wealth created in the world.  This is already entirely inexcusable.  But since the beginning of the decade, this pace of accumulation has dramatically increased.  Since 2020, the top 1% (and to be in the top 1% you need to have wealth of just over $1 million dollars), have captured almost two thirds of all new wealth (see graph below – all graphs are taken from the report).  So since the beginning of the decade, the richest one percent of people have captured almost twice as much wealth as the whole of the rest of humanity put together. 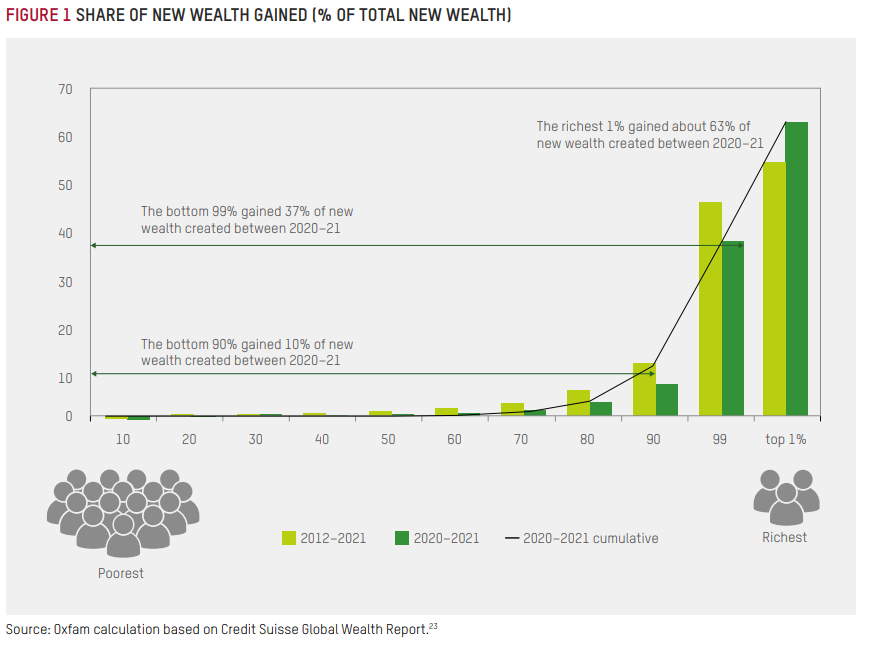 We did our first Davos inequality report ten years ago. In that decade, the wealth of the world’s billionaires, and the number of billionaires has basically doubled.  How long can this go on? 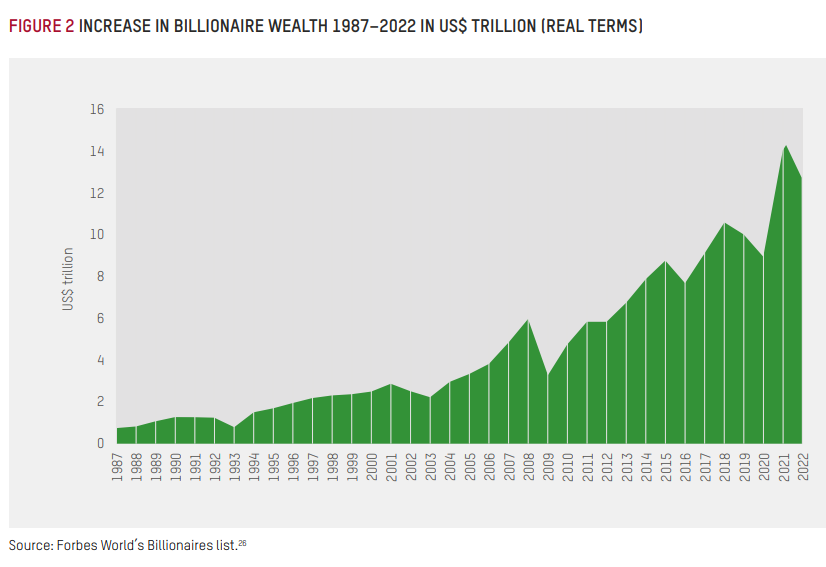 Our report also drills down into the winners from the cost-of-living crisis.  We point to research from Australia, the UK, Spain and the USA which shows that at least 50% of the increase in inflation is due to corporates cashing in on price rises and profiteering from the crisis.

The report shows that 95 food and energy corporations have more than doubled their profits in 2022. They made $306 billion in windfall profits and paid out $257 billion (84 percent) of that to rich shareholders. The Walton family of billionaires, which owns half of Walmart, received $8.5 billion over the last year.

The impact of inflation is being felt by workers worldwide; we found that 1.7 billion workers are living in countries where prices are outpacing wages.

…so why aren’t we taxing the super-rich?

This year, the main focus of our report is on taxing the super-rich.  We detail how the last 40 years have seen a collapse in taxation of the richest people. This has been accompanied by a big jump in the share of income going to the top 1%. 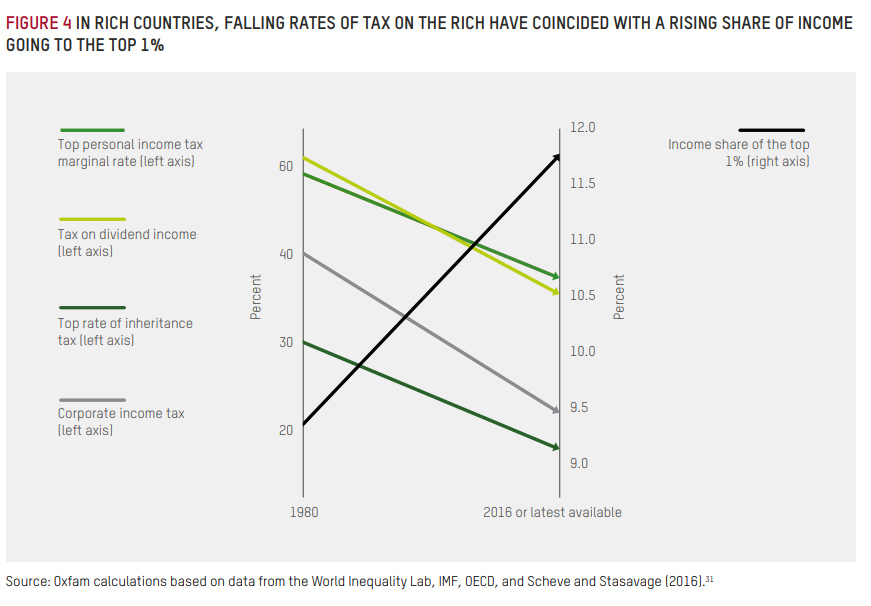 Half of the world’s billionaires for example, live in countries where there is no inheritance tax on bequests to children, meaning that $5 trillion dollars, a figure greater than the entire GDP of Africa, could be handed on without a penny of tax being paid, creating a whole new global aristocracy.

When it comes to taxing the super-rich, so many governments have not even got the basics in place.  No inheritance tax.  No property tax.  No taxes on gains from capital.  Let alone taxes on wealth.

And as white men are the most likely to be rich, they are the biggest beneficiaries of this failure to tax the rich.

We think the top rate of income tax on the super-rich 1% should be a lot higher; for example 60%, and higher still for the multi-millionaires and the billionaires.  For large parts of the 20th century, it was normal to tax the incomes of the richest at 60% or above. In the US, top federal income taxes stood at 91% from 1951 to 1963, and 70% as recently as the 1980s. The country’s top inheritance tax rate was 77% until 1975. These taxes on the wealthiest went hand in hand with decades of successful economic development.

Whilst calls for taxing the rich are not new, the current global context – huge suffering, bankrupt governments, spending cuts, hunger – is. The anger at austerity and frustration at the cost-of-living crisis is something I haven’t seen since the financial crisis in 2008.  The wholesale rejection of our short-lived and little loved UK prime minister Liz Truss when she tried to cut taxes for the richest was, I hope, a real watershed moment. 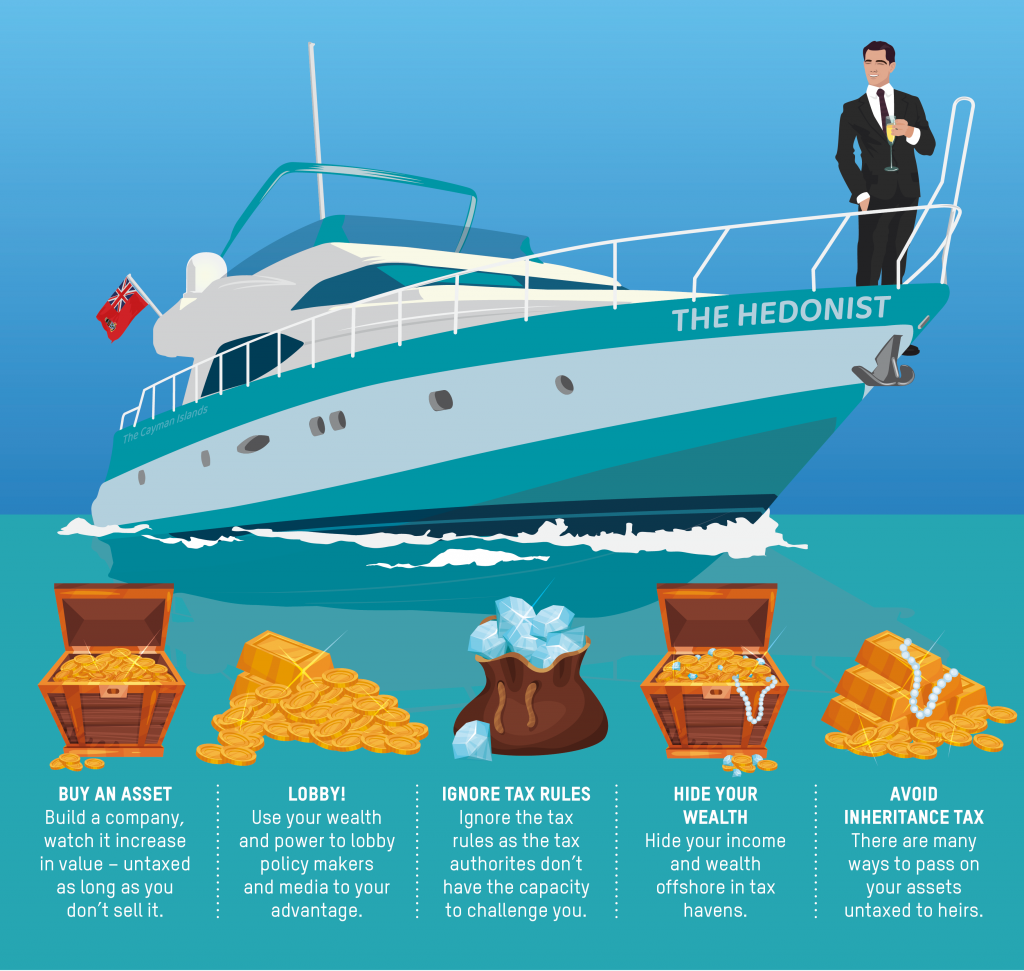 In Latin America, a group of nations, led by Colombia and Chile, have concrete plans to increase taxation on the richest.  Other nations across the world are doing the same.  Protests are happening around the world and at Davos itself to demand an end to inequality.  Millionaires are actually joining the protests in Switzerland, demanding to be taxed in what must be the ultimate man bites dog moment.

The volumes of money that could be raised are truly spectacular and reflect the huge explosion in private wealth that has mirrored the increase in public debt since the financial crisis. Massive interventions by governments and central banks have in turn driven up asset prices worldwide and with this the fortunes of those at the top. This increase in wealth is not because rich people have worked harder, or become more clever or entrepreneurial, it is instead a structural by-product of the necessary actions governments had to take. That makes the case for clawing some of this money back even more compelling.

Together with Patriotic Millionaires and the Fight Inequality Alliance, we have calculated that a wealth tax of 2% on the world’s millionaires, 3% on those with wealth above $50m, and 5% on the world’s billionaires could raise $1.7 trillion dollars annually. This would be enough for transformative change, including lifting 2 billion people out of poverty and to fund a global plan to end hunger.  It could hugely contribute to the demands of developing nations to fund the loss and damage caused by runaway climate breakdown.