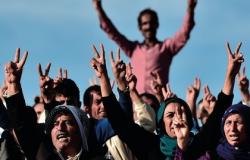 The Kurds of Northern Syria is one of the latest additions to the fast-growing literature on the Kurds, and in particular on the Kurds in Syria. Traditionally, there have been fewer contributions on the Syrian Kurds when compared to the Kurds in Turkey, Iran and Iraq. Yet, as fate would have it, Syrian Kurds became the decisive players in directing the path of the Kurdish national struggle following the beginning of the war in Syria in 2011.

The purpose of the book is to describe the evolution of Kurdish politics in Northern Syria, the various political parties and blocs fighting for power and legitimacy, and the changes in identity and political representation as experienced or perceived by Kurds living in a state of uncertainty amidst war and contested autonomy. The authors have produced a well-written, structured and meticulous book that refreshingly helps to fill the knowledge gap on the Syrian Kurds since the 2011 Syrian upheaval. The book relies on field research, and in particular surveys, conducted by the authors in Northern Syria in spring-summer of 2016. Crucially, the authors seek to understand popular reactions to governance structures and its “potential for representation of diverse identities in northern Syria” (p 90).

We learn of the socio-cultural, ideological and security dominance of the PYD (Democratic Union Party) in Northern Syria, which has caused rifts with other Kurdish political parties in the area, specifically the main oppositional bloc, the KNC (Kurdish National Council). According to the book, the PYD’s dominance has resulted in mixed-level resentment towards the party, particularly regarding such matters as democratic practice, education and forced conscription. Results from surveys and additional interviews conducted with party officials give valuable insight into perceptions, beliefs, opinions and preferences about political ideology, religion, women’s rights, democracy and party systems among the Syrian Kurds.

In the first of the book’s six chapters, the authors describe the history of Kurdish politics in Syria and cover the main categories relating to key influences on Kurdish identity formation in Syria (i.e. the tribe, the family, the state, the transnational, ideology and religion). In a concise, detailed and comprehensive way, the chapter explains how Kurdish political parties (particularly from outside Syria) consolidated Kurdish support and shaped Kurdish identity in Syria, discussing the various disputes between these parties.

The second chapter, then, follows on from the first to give a better historical background into the two main Kurdish political blocs in Northern Syria today, namely the dominant PYD and its various affiliated groups on the one hand, and on the other hand the KNC which is a group of political parties dominated especially by the Kurdistan Democratic Party in Syria, KDP-S (or the Syrian branch of the Barzani family-led KDP in Iraq). In addition to discussing the various policies and methods that distinguish the two blocs, the authors explain the problems and challenges facing each side, their competitive attempts to frame Kurdish identity, and their quest for leadership and legitimacy among Syrian Kurds in the post-2011 era. In this way, the authors argue that Kurdish political parties are central to any discussion of the political situation in Syria – which is what the rest of the chapters focus on.

Further, the third chapter addresses the development of the PYD-led autonomous project in Northern Syria, including its various institutions, branches and public services and the different obstacles facing these. The sections on the councils and communes, education, media, economy and security branches are informative, though another section on health services and a longer account on the economy would have been welcome.

In the fourth chapter, the authors delve into discussing the changing perceptions of identity and representation among Syrian Kurds since 2011. They note that there has been a significant degree of ethnicization of identity since then but interestingly, this development has been happening during the PYD’s active attempts to actually de-ethnify the struggle. The PYD tries to promote a multicultural and gender equal society as per the principles of their secular, leftist ideology (called democratic confederalism) and increase their legitimacy among their non-Kurdish neighbours (locally, regionally and internationally). However, the PYD has not evaded criticisms of their methods in achieving a social and political revolution.

In chapters five and six, the authors describe in detail the delicate complexity in which the future of the Kurdish autonomous region, or just the extent of “Kurdish cultural rights” in a prospective Syrian peace agreement, is bound up with regional and international state and non-state actors and their respective interests. The authors explain that the Syrian Kurds’ current relations with other Kurdish parties in both Syria and in neighbouring countries remain extremely fragile and challenging, and finally conclude that, overall, both regional and international actors are ultimately only interested in exploiting the Kurds as it befits them (either politically or militarily). These chapters, and in particular chapter six, offer informative, policy-oriented assessment of the various future scenarios in which the Syrian Kurds might find themselves in. Here it is interesting how since 2011, changes in perception of “Kurdish” in Syria is also linked to changes in the perception of “Syrian”.

Naturally, the book is not problem-free. Above all, the research methods and data collection tools applied during the course of the project are not adequately assessed in the Introduction of the book. From a research perspective, this is quite important as there have been so few studies on Northern Syria (beyond news reports). For example, the authors could have listed the survey questions so that the reader gains a better sense of its design and purpose. Instead, the questions appear in the text or in the footnotes but not always as a question, making it hard to assess in retrospect the strength of the claims made. We also know very little of the survey participants (e.g. age) beyond their numbers and gender ratio (which again, can be found in a footnote). The introduction would have also benefitted from a more extensive discussion of the meaning of identity and representation in the sub-sections named “Identity” and “Representation”. In addition, a brief literature review, as well as the incorporation, of some of the latest material on Northern Syria was missing from the book. At the same time, the maps included at the beginning of the book are difficult to read as the text is too small and blurry.

Second, in light of the ongoing political experiment in communal democracy in northern and eastern Syria (under the PYD), it seems as the authors did not attend any of the local council meetings, economic cooperatives, or the new Kurdish-medium schools to directly observe these first-hand, since some of their interviewees criticised these. Their personal observations, contrasted and compared with the participants’ criticism of the communal system and its lack of political diversity, would likely have resulted in a more exciting analysis, but also in a greater validity of the arguments made.

Third, despite the critical progress made regarding women’s rights in Northern Syria, this topic is not given sufficient attention, neither in chapter four (where it is raised) nor elsewhere in the book. This is quite relevant since perceptions of Kurdish identity are also linked to shifts in traditional gender roles. The PYD (and its affiliate the PKK) portrays the free Kurdish woman as one that is completely liberated from patriarchy (thus linking ethnicity and sex together). In other words, what can be said about the relationship between changing perceptions of Kurdish identity and of female/male identity? This is interesting to elaborate upon because, as the authors note in the section on women’s representation, “frictions between pre-existing social norms and new laws remained prominent” (p 156).

Overall, the book is easy to read and jargon-free, and offers a detailed narrative on the latest situation in Northern Syria with regard to shifts in perceptions of Kurdish self-identity and representation. Future studies can delve deeper into the implications of such changes. The book is recommended to those interested in understanding both the history and current state of intra-Kurdish political divisions in Syria, the changes in the meaning of identity and political representation, as well as the local, regional and international challenges facing the autonomous federation.

Arin Y. Savran is a Visiting Researcher at Trinity College Dublin at Belfast.