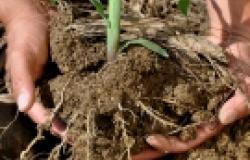 Andrea Koch, Alex McBratney and Budiman Minasny investigate the viability of a call by the French Government in the lead up to COP21 to increase carbon in the global soil stock by 4 percent per annum, based on Australia’s world leading regulatory approach to carbon farming.

In March 2015, the French Minister of Agriculture, Stephane Le Foll challenged the world to see that agriculture can and must be part of the solution to climate change, and that soil carbon sequestration is a key part to achieving this . Speaking at the Global Alliance for Climate Smart Agriculture meeting in Montpellier, Le Foll set forward an ambitious agenda – ‘quatre pour mille’ or ‘4 per thousand’ – to increase soil carbon by four parts per thousand per annum. Jean-François Soussana, Scientific Director for Environment of the French National Institute for Agronomical Research (INRA), advocates that an annual increase of “4 per thousand” (0.4%) each year of organic matter in soil would be enough to compensate for the global emissions of greenhouse gases.

The official launch for this initiative will take place at COP 21 in Paris December 1, 2015, with the signing of a joint declaration between all stakeholders.

Australia currently leads the world in this space, being one of the few countries to have a national regulatory regime recognizing soil carbon sequestration as a source of greenhouse gas abatement. This system, legislated in 2011 under the Carbon Farming Initiative, and now being implemented by the Government’s Emission Reduction Fund allows farmers and land managers to earn carbon credits by storing carbon or reducing greenhouse gas emissions on the land. Australia also has supply chain capacity to deliver soil carbon abatement from farm to the market – soil carbon is already being sequestered by farmers and sold as offsets. The success of this system has much to offer in understanding the achievability of this aspirational target set by France.

Conceptualizing soil as a sink for carbon is not easy. Carbon is one component of the most complex substance on the planet, which remains hidden below our feet. In this article we demystify the relationship between soil and carbon, and demonstrate how realistic the goal of ‘quatre per mille’ is, based on Australia’s experience.

Let us start with the analogy of a football field (Soccer, not rugby!). Imagine it is a fifth larger than normal – making it one hectare in size. The top layer of soil on the field, 30 cm deep, is known as the topsoil. Topsoil is made up mainly of fine particles of minerals (clay, silt, sand and gravel), but is also contains a small proportion of organic matter. Organic matter comes from things that were previously alive – plant matter and organisms that lived in the soil. . Carbon is the main ingredient of organic matter, so organic matter is often referred to as ‘soil organic carbon’. In Australian soils, this organic matter makes up on average, between 1 and 3 percent of the topsoil.

It is important to understand that the increase required is relative to what is already there – it is a 0.4 percent increase of the existing carbon in the soil (in our scenario, 0.4 percent of 58 tonnes which is 0.2 tonnes). It is not referring to an overall increase of 0.4 percent in carbon (in our case taking total carbon to 1.9 percent), which would be impossible. The amount will vary from soil to soil – some soil has more carbon than others due to its inherent nature (there are many different types of soil), or as an outcome of its condition, which comes about through how it is managed.

The question then is, is it possible to actively increase the amount of carbon in this topsoil? The answer is a definitive yes. We know that in both cropping and grazing systems, it is possible to adjust farming practices to bring about an increase in soil carbon in topsoil. The aim is to increase the organic matter from plant material and animal biota in the soil. In cropping systems for example, a reduction of tillage (e.g. using no-till or zero-till approaches), optimization of crop rotations (the different crops grown and the order they are grown in), and retention rather than burning off of stubble, all lead to increased soil carbon. In grazing systems, changing from fixed stocking levels across large fields, to moving tight mobs over smaller areas on a frequent basis (referred to as High Intensity Short Duration grazing), and encouraging deep rooted perennials in pasture, also lead to increased soil carbon.

The Australian Government has recognized this. On 25 July 2014, the Australian Government approved the first systems methodology for soil carbon sequestration, titled the ‘Carbon Farming (Carbon Farming Initiative) (Sequestering Carbon in Soils in Grazing Systems)’ . Farmers can adopt this methodology, and provided that they are changing some aspect of their grazing practice that will lead to measureable soil carbon increases (e.g. from fixed stocking rates to HISD), can earn regulated carbon credits that can be sold on the market. Cropping based methodologies are under development..

The next question then becomes, can our football field be scaled up, can the Australian approach act as a framework through which to achieve the target set by the French, and if so, what would it cost?

To understand the answers to these questions, let us extend our football field analogy a little further. Imagine that all of Australia’s agricultural land was turned into 1 hectare football fields. There would be 470 million football fields. Currently, all that land holds 25,000 million tonnes of carbon (at a rate of between 1 and 3 percent of the topsoil). On average, to achieve a 0.4 percent increase, we would need to increase the soil carbon in the topsoil across the whole area by 100 million tonnes per annum – about 0.2 tonnes per hectare per year. This would achieve the quatre pour mille target. Ironically, this is also very close to Australia’s total annual emissions from fossil fuels, which is 106 million tonnes per annum. Theoretically then, increasing soil carbon in Australia’s agricultural soil by 0.4 percent per annum could just about offset those..

The question is - is this really possible? From the regulatory perspective the answer is yes. The Emission Reductions Fund has purchased soil carbon abatement in two auction rounds during 2015 – about 4million tonnes was purchased in April and about another 4million tonnes was purchased in November. Based on this, a twelve-fold increase in the purchase of soil carbon sequestration through this regulated scheme would be heading toward the 100 million tonne target. With an average price of purchase ($13.95 per tonne in the April auction, and $12.25 per tonne in the November auction), this would cost around $1.2 billion per annum. This would be achieved at a higher rate of sequestration across a smaller pocket of land, making the French target even more realistic.

From a practical, on-farm perspective the case is not yet as clear-cut. Only time will tell what the true results are, the delivery is contracted over ten years or more. Success including measureable increases in soil carbon and payments to farmers, must be clearly demonstrated in order to build confidence in the supply side of the market.

It is also important to recognize that there is an upper limit in how much carbon can be stored in topsoil – there is a point at which the upper threshold for soil carbon is met, even in the best managed soils. As a strategy for climate change mitigation, soil carbon sequestration buys time over the next ten to twenty years whilst other effective sequestration and low carbon technologies become viable.

Having said this, there is plenty of scope in Australia and internationally to increase soil carbon. The easiest target is in converting degraded land to best practice. While there is a great deal of scope for this in grazing systems, the reality in cropping systems is that zero-till and conservation agriculture is already best practice in Australia, with around 80 percent adoption across the grain sector, a world leading rate. The challenge for cropping farmers is to find the next step change in practice that will further improve soil condition and deliver increased soil carbon.

The good news is that Australia’s experience shows that the French target, while aspirational, is achievable. For nations that are willing to learn, Australia has a great deal to share, from policy through to practice.

Export finance and the green transition