How EITI involvement can benefit Corporations 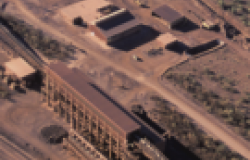 This post represents the sixth in a series of opinion pieces from the ongoing 2016 EITI Conference, in Lima, Peru being covered on the ground by the Global Leadership Initiative's team. Please check in regularly to keep up to date with the latest news and analysis from the summit. For previous posts please click here.

The extractive industry is largely dominated by multinational enterprises (MNEs), except the traditional oil and gas producers. The EITI is therefore critical in the governance of natural resources in the wider developing world. Hence, greater involvement from these corporations in the governance process is required. However, as it stands, the EITI implementation process only requires the companies to disclose their payments to governments. As a result, companies’ lack of compliance have hindered the host countries implementation of the initiative.

In this blog, I will outline the benefits for companies’ involvement in the EITI and highlight some specific experiences from the 7th Global EITI Conference, concluding with the challenges of corporate engagement.

A Business Case for Supporting the EITI Process

Transparency can be used as a method of reducing business risk. From a business point of view, reducing corruption can lead to more secure infrastructure and efficient public services, both of which can only be a benefit for multinational extractive companies.

A central issue in the EITI Conference is about ‘beneficiary ownership’, or the disclosure of the true owners of private companies for the purpose of tax payments in host countries. The EITI’s decision to include the issue of beneficial ownership has been welcomed by corporations within the sector. At the opening plenary of Wednesday’s events, Jean-Francois Lasalle, Vice President Public Affairs at Total, brought this topic to the board – a decision taken in 2013 in order for the EITI to become more meaningful in terms of better tax collection in the sector. By 2020, all countries will have to include beneficiary ownership of all private companies, of which Lasalle described this as a “Win-win” for corporations. The importance of knowing who the corporations are truly partnering with, for example when creating joint ventures was highlighted, with optimism that past problems such as tainted assets and corruption will be prevented through these new requirements.

Importantly, corporate engagement in the EITI can increase a company’s access to finance. Commitment to regular EITI reports improves credit ratings, and in turn, enhances the trustworthiness for a corporation. Repsol, for example, is an integrated global energy company to be included in the DJSI due to their successful engagement with the EITI.

Compliance can also lead to companies developing first mover advantage. Companies that have already been adhering to the EITI standards have the benefit of being the leader in the sector in terms of corporate reporting. Rio Tinto has been producing reports for the last eight years and has developed competitive advantage over its rivals. The spokesperson of Rio Tinto highlighted to the delegates that the company has been able to spread the cost of implementation over this period, and will not have to “scramble” to produce a report before the deadlines.

Tuesday’s session on mandatory reporting laws and their global implications heard a spokesperson from the Rio Tinto Group. She highlighted that their main motivation for corporate reporting and engagement in the EITI was to gain public trust. This is evidenced in the Rio Tinto Group receiving awards for Public Trust for example PWC’s ‘Building Public Trust Award for Tax Reporting in the FTSE 350 Extractive Sector’ award in 2013.

This motivation is reinforced by Andrew Gowers, the Head of Corporate Affairs for Trafigura. Gowers stated that Trafigura’s main motivation for EITI involvement and corporate reporting was that of trust.

The EITI can be used to create a social ‘licence to operate’ within the communities in which the firms operate. Peter Voser, the CEO of Royal Dutch Shell suggests that, EITI can drive positive changes in the country and help governments to better serve their citizens.

There are now 50 EITI compliant countries. This has allowed for a consistent standard of corporate reporting for corporations operating in the sector. Greater transparency on the part of the corporations will enhance their image and reputations and the above stories drawn from the conference give evidence of this

Despite these evident benefits for corporations’ engagement, there are still challenges to be tackled by the EITI. Tuesday’s Technical Assistance Roundtable brought to the forefront that companies’ investments in the EITI are reducing. After the core contribution by the Norwegian government, the EITI aims at sourcing fifty percent of its funding from supporting countries, Non-Governmental Organisations (NGOs) and International Development Agencies (IDAs), and the other from corporations. In the funding for 2014, the private sector contributed 37% of the total EITI budget. In 2015, it can be seen from the Annual accounts that the EITI lost funding from OK Tedi Mining, London Mining, and Dana Petroleum, amongst others. Below chart shows the EITI’s sources of funding for the 2014 year.

MNEs must consider engagement with the EITI as a strategic move to consider the long term within the Industry. By engaging with government and civil society, corporations can jointly build an improved environment for all stakeholder groups in which their operations and investments are sustainable. 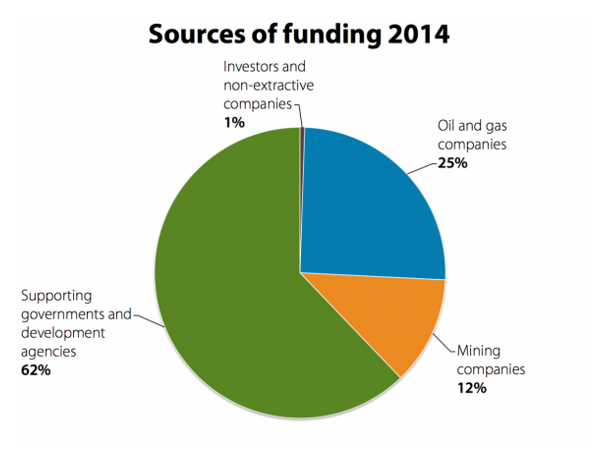 The 7th Global Conference has highlighted that corporations can benefit from engagement with the EITI through reducing risk and building a trustworthy reputation. The key role which MNEs play in the EI necessitates a stronger need for involvement from these key stakeholders. The EITI must now look to further communicate the benefits of engagement to the key corporate players in the EI.

Megan Wynne is a Policy Analyst for the Global Leadership Initiative. She is currently finishing her degree in BA Business Management at The University of Sheffield, UK.